Rob Guy, Principal Conductor of The University of Manchester Chorus, has been working alongside Manchester Camerata to bring music to broader audiences. 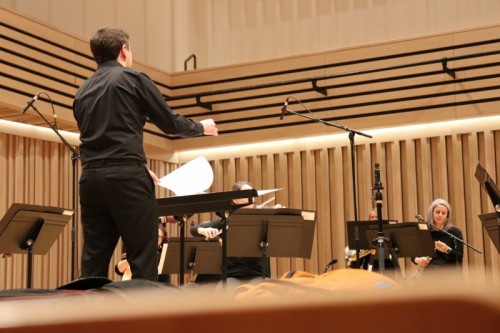 For the past four years, Manchester Camerata, a partner of Creative Manchester, has been working with Orchestras Live on the Classically Yours programme in East Riding, Yorkshire, working to bring high musical experiences to unusual venues such as care homes and schools, delivering music-making sessions to enable more people to have their voice heard in the creation of new songs or instrumental pieces.

These songs are arranged by Camerata musicians and composers, and performed in special concerts, a number of which have been presented and conducted by Guy.

“I have been humbled to witness the impact live music and creativity can have on children, young people, parents, teachers and the elderly - in fact everyone,” he said. “Music is for everyone; participation should not be based on a postcode lottery or financial position. These projects prove what is possible when someone is given the chance. The opportunity to work with the amazing musicians of Manchester Camerata is always a pleasure, and what makes Classically Yours special is all ages can listen, engage, enquire, dance, create and compose to our music.”

“We have opened minds and I am proud to have been part of it,” Guy continued. “I have come away with a renewed vigour to keep making music for the benefit of all! We need organisations to show us a way forward of genuine inclusivity. More inclusivity and less hierarchy. This project listens. Other organisations should take note.”

Guy’s passion for community music comes out in his work, according to Camerata Project Manager Emma Arnold.

“He gets everyone in the room involved, chatting to the local audience, getting the young people to answer questions on the music, and involving people from care homes who are performing in the concerts. Not an easy feat at all and he glues it all together seamlessly,” she noted.

Since the pandemic, Manchester Camerata have had to approach Classically Yours differently, successfully moving the music-making online. From August to December the project has brought together an online choir for the residents of Withernsea, East Riding and surrounding areas, with the support of Withernsea Ladies Choir, who have been voluntarily holding sessions in the care homes.

A song has been produced with the participants of the choir, arranged by composer Richard Taylor, recorded by the orchestra and conducted by Guy. The participants used Zoom and editing software to create Unlocked Voices. The piece is to receive its Seaside Radio premiere on 5 December 2020.

A film is also being developed, entitled Sounds of Withernsea, which includes three pieces conducted by Guy, showcasing an orchestral medley of songs created in schools and films during the project. A musical DVD for care homes is also due for release, supporting residents in making music via screen, despite not being able to meet in person.