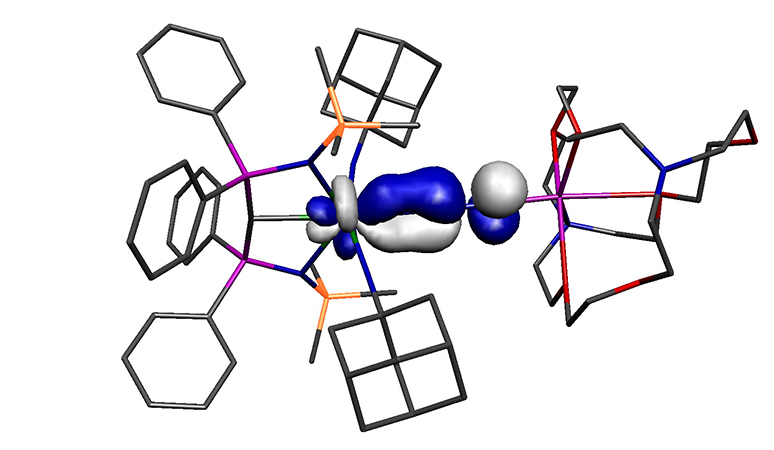 Work led by the research group of Professor Steve Liddle and published in the prestigious journal Nature Chemistry has reported a uranium dinitrogen molecule that, according to basic chemical theory, should not exist. The rule-breaking molecule could have implications for the activation of dinitrogen, which is an essential molecule for producing fertilisers.

Approximately 450 million tonnes of fertiliser are produced every year using ammonia made from the Haber Bosch process, and this is fertiliser that underpins life on Earth. In Haber Bosch, dinitrogen binds to metals on the catalyst surface and is split. It then reacts with dihydrogen to make the ammonia.

Given the vast scale that Haber Bosh operates on, for many years there has been interest in how dinitrogen binds to metals from around the Periodic Table in molecular complexes - since these species can be studied in atomic detail - because this informs us about the key binding and splitting steps in Haber Bosch. This accounts for most of the energy demands of this process.

One of the best-kept secrets of Haber Bosch is that although iron is the catalyst of choice, uranium is in fact a superior catalyst - and so there is interest in how uranium binds to dinitrogen.

Dinitrogen is ostensibly one of the worst molecules to bind to metals. Indeed, it is so inert it is usually used as a protective atmosphere for chemical syntheses, and in food packaging to prevent food going off. However, under certain circumstances dinitrogen binding to metals can be encouraged, and in this model the metal needs to be in a low oxidation state and to be electron-rich enough to partake in bonding, whereby the dinitrogen donates electron density to the metal and the metal reciprocates.

The molecule reported in the study is a high oxidation state, electron-poor metal, yet it binds to dinitrogen, one of the worst possible ligands. Therefore, the molecule should not exist, yet it does. The working hypothesis as to why the molecule can form is that the uranium is bonded to three extremely strong donor ligands, and despite its high oxidation state these three ligands make the uranium unusually electron-rich overall, and this overrides the usual restrictions on the bonding model.

This work rewrites a fundamental rule of chemistry, and may have implications more broadly, because a lot of dinitrogen activation chemistry is predicated on the assumption that low oxidation state metals are needed. However, this study now shows that high oxidation state metals, under the right circumstances, might also support novel dinitrogen activation chemistry.

This knowledge will allow scientists to think differently about how to tackle the challenges of dinitrogen activation, and could even influence studies of the Haber Bosch process.