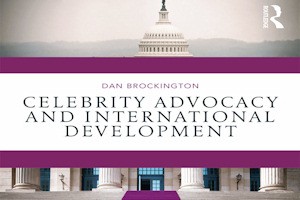 Celebrities working with international charities are at their most useful when they work behind the scenes speaking to movers and shakers, rather than filling column inches of newspapers, according to new research.

Two surveys by Professor Dan Brockington from The University of Manchester reveals the public is, surprisingly, not good at noticing the charitable work of celebrities in his new book published this week.

Instead, it’s the power brokers in world of business and Government who are more influenced by the famous.

Written while he was living in rural Tanzania, his new book ‘Celebrity Advocacy and International Development’ is published by Routledge.

He said: “Whatever their motive, celebrities can be very effective in terms of furthering the aims of charities, if they are used well.

“This is especially true when they come into direct contact with influential elites or supporters.

“Though charities are doing a good job in the way they work with celebrities – there’s more they can do to influence the people where the power lies.”

Professor Brockington’s research reveals that associations between celebrities and well known charities are not widely known. The public will know the charities, but not that their celebrity ambassadors work with them.

And a surprising but significant 74 per cent of the public, he finds, say other people pay more attention ‘than me’ to the charitable work of celebrities.

“The vast majority of the most famous celebrities publicly support charitable causes, but their influence on tackling development issues has been relatively limited,” he said.

“It Is difficult to find evidence to support the popular assumption that celebrity advocacy is popular and appealing . But what matters, is that elites believe celebrities are embodying the affective will of the people.”

He added “Most of the major development NGOs devote web space to their celebrity ambassadors, and they have permanent full time celebrity liaison officers among their staff.

“To promote the maximum impact of their celebrity, they need to plan well thought out events which work in their own right and do not rely on that big name – even if it is Tony Blair or Angelina Jolie.

“Being strategic is the goal:  it’s about access to the powerful and a media buzz is not necessarily the way to achieve change.

“Raising money is clearly beneficial – but winning the ultimate goal of reducing, for example poverty, is quite another; sadly, the public just don’t get that.”

Although the G8 countries pledged to increase their aid for select countries from $25 billion to $50 billion by 2010, the cash never materialised. Celebrity pressure produced an increase in rhetoric and public promise but did not see those promises kept.

And a 2012 video, retweeted by Justin Bieber and Oprah Winfrey, made by the NGO Invisible Children calling for the capture of Joseph Kony, head of the notorious ‘Lords Resistance Army’ of Africa, was seen by over 97 million people.

Critics argued that Kony's followers were far fewer than the film claimed, and that the video failed to point out that Kony was believed to be in the Central African Republic rather than Uganda .

The LRA abduction rate sharply increased in the weeks since the film was released, and Kony has still evaded capture.

The surveys were of 1,111 and 1,999 each, administered by internet to the UK Public Opinion Monitor at the University of Sussex as well as nine focus groups.

Professor Brockington is available for interview