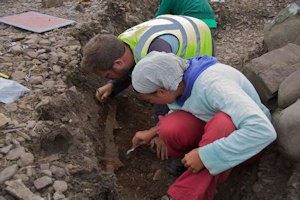 Artefacts from the UK mainland’s first fully intact Viking boat burial site discovered by University of Manchester archaeologists working in the Scottish Highlands are one of 10 extraordinary objects to feature in the British Museum's latest blockbuster show.

In A history of the Viking world in 10 extraordinary objects, author of A History of the World in 100 Objects and Director of the British Museum, Neil MacGregor, condenses the museum's latest blockbuster show into 10 fascinating pieces.

The burial, from  late ninth or early 10th century, is part of a rare fully intact site excavated in the summer of 2011 on the remote Ardnamurchan Peninsula on Scotland's west coast

The 1,000-year-old find,  was made by the Ardnamurchan Transitions Project (ATP) which is a team led by experts from the Universities of Manchester, Leicester, CFA Archaeology Ltd and Archaeology Scotland.

It is the only known Viking boat burial to be excavated on the British mainland in modern times, surviving in the form of more than 200 rivets, many in their original location, which indicated a small clinker boat.

The boat contained a sword, an axe, a spear, a ladle, an Irish bronze ring-pin and the bronze rim of a drinking horn. Positioned beside the warship Roskilde 6, the Ardnamurchan boat burial represents the final journey of a Viking warrior, sailing into the afterlife.

Co-Director of the project and Lecturer in Archaeology, Dr Hannah Cobb, from The University of Manchester, has over the past nine years been excavating artefacts in the Ardnamurchan Peninsula underpinning 6,000 years of its history.

She said: “We're delighted this exciting find is featuring in this exciting exhibition. we have excavated many important sites over the years but these are the most important artefacts we have found. They were exceptionally well preserved and incredibly rare.

“The Viking boat burial was an incredible discovery, and the artefacts and preservation make this one of the most important Norse graves ever excavated in Britain."