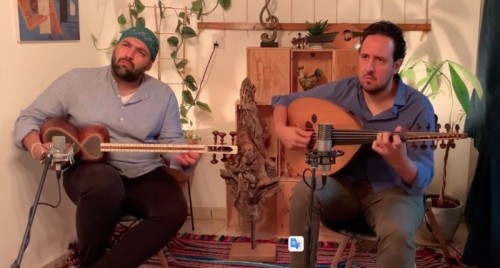 Our new concert series starts with two virtuoso performers from Cyprus and Iran playing original music by Dimitrie Cantemir (1673-1723), a Moldavian prince, statesman, a prolific writer, a philosopher, historian, composer, musicologist, linguist, ethnographer and a geographer, regarded as one of the most significant early Enlightenment figures.

Born in Nicosia, Cyprus, Giannis Koutis studied Byzantine Ecclesiastical, Classical Guitar and Oud the with the virtuoso Oud player Haig Yazdjian. He completed his Master studies on Ottoman Music at Codarts Conservatory for the Arts (Rotterdam, NL) with the neyzen master Kudsi Erguner (UNESCO Artist for Peace). He actively researches in the field of Modal Music of the Eastern Mediterranean, focusing mainly in sources of unpublished manuscripts of Monasteries’ archives. He performs on an Oud made by Dimitris Rapakousios.

Reza Mirjalali was born in Tehran, 1989. He started music at the early age of seven, while his father, Maestro Shahram Mirjalali, was teaching him Tombak and a Tar, giving concerts already at the age of 14. He is actively performing worldwide and has several collaborations with ensembles of different music genres such as Persian traditional music, Ottoman music, Jazz, Pop while maintaining a duo with his father. Currently, he is working on the release of his first solo album. He performs on a Tar made by Shahram Mirjalali.