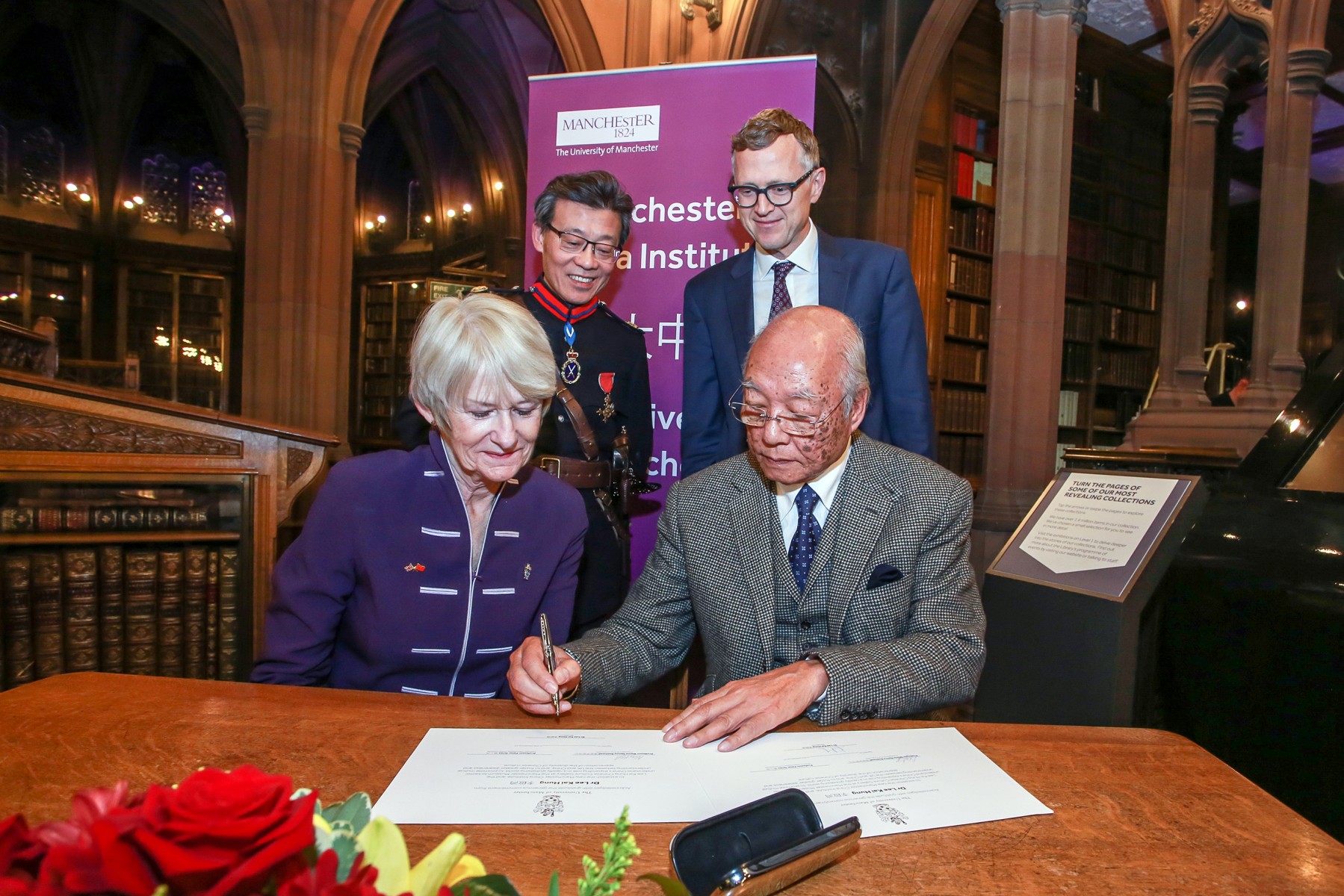 A new £5m donation will allow The University of Manchester to establish a major centre for China studies. It will seek to improve mutual understanding in UK-China relations, and establish a new Chinese culture gallery at the Manchester Museum.

The donation, by retired Hong Kong businessman, philanthropist and Honorary Graduate of the University of Manchester, Dr Lee Kai Hung is a major investment which will promote world-leading research, community outreach activities, and public lectures in Manchester and China.

It will also create a new ‘Lee Kai Hung Chinese Culture Gallery’ at the Manchester Museum, the largest University museum in the UK, displaying artefacts such as ancient bronze sculptures, carved jade and textiles.

With growing links between Manchester and China, and the global significance of Chinese policies such as the ‘One Belt, One Road’ strategy, the Manchester China Institute is set to play a major role in improving understanding between the China and the UK.

The Centre’s new Director is Professor of Chinese Politics Peter Gries, who has worked extensively on China’s foreign relations.

He said: “The UK and China lie on opposite ends of the Eurasian landmass which is the focus of China’s ‘One Belt, One Road’ policy. Manchester, in particular, has a large Chinese community and historic ties with China which were only strengthened by the visit of President Xi to Manchester and the University in 2015.

“To realise the full potential of UK-China bilateral relations, however, greater mutual trust and understanding are urgently needed. We are therefore extremely grateful to Dr Lee for his generous gift, which is set to put Manchester at the forefront of China studies in the UK.”

As well as research, the Centre will have a particular emphasis on working with the local Chinese community and the thousands of Chinese students in the city. It will also seek to serve local businesses and promote peaceful UK-China relations.

Manchester has more academics engaged in China and China-related studies than almost any other UK university – working on everything from the arts and humanities to health and science.

It also has a Confucius Institute which focuses on teaching Chinese. The new Manchester China Institute will be based in its own listed historic building, which will be named in honour of Dr Lee.

Dr Lee said: “The development of China-UK relations is a subject very close to my heart, so I am delighted to be able to help create this Institute at The University of Manchester. China’s ties with this city, the university and the many Chinese staff and students make this an ideal place to locate the Institute and the China Gallery.”

Professor Dame Nancy Rothwell, President and Vice-Chancellor of The University of Manchester said: “We are very grateful to Dr Lee for this gift, which will greatly increase knowledge in a subject of global significance. Alongside the important research outputs, this gift will enable the greater promotion of understanding between the two countries, not least through the programme of outreach and the new gallery at the Manchester Museum.”

China’s ties with this city, the university and the many Chinese staff and students make this an ideal place to locate the Institute and the China Gallery