Why are gang rape accusations treated as ‘sexual abuse’ in Spain?

Why are gang rape accusations treated as ‘sexual abuse’ in Spain? 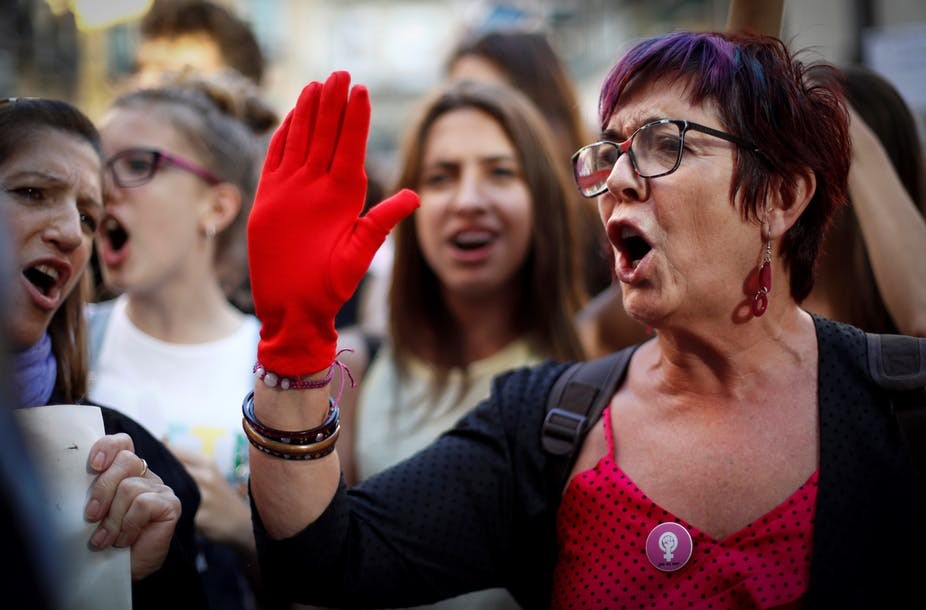 An ongoing trial in Spain shows that ineffective rape legislation continues to fail women. Last year’s trial of the shocking “la Manada” (“wolf-pack”) rape case brought the Spanish law under international scrutiny when a group of men were convicted of sexual abuse rather than rape, despite the degrading nature of the attack.

The supreme court recently convicted all five perpetrators of gang rape in a retrial, increasing their sentences from nine to 15 years accordingly. But now a second case is again showing how sexual violence laws in Spain are inflected with misogyny. This latest trial has become known as “la Manada de Manresa” (“the wolf-pack of Manresa”, a town in northern Catalonia) because of its alarming similarities with the now infamous Manada crime.

Under Spanish law, sexual abuse refers to a broad spectrum of crimes that occur “without consent”. A rape conviction requires evidence of violence or intimidation.

In the original la Manada trial, judges ruled there was no proof of either violence or intimidation, despite the fact the complainant – an 18-year-old woman – was corralled into a lobby by five men who took it in turns to assault her. Although the first trial found there to be insufficient evidence of force or physical coercion, five judges at the Supreme Court (including two women) deemed that footage filmed by the attackers on their mobile phones show an “intimidating” atmosphere that compelled the woman to submit to the attackers.

The trial has provoked furious reactions from a now well-organised, incensed feminist movement in Spain. Building on the momentum from the la Manada case – which started the #NoEsAbuso (#NotAbuse), #EsViolación (#ItIsRape) and #YoTeCreo (#IBelieveYou) movements – protestors regularly gather outside the Barcelona courthouse, holding placards that read ‘No ÉS ABÚS. É VIOLACIÓ!’ (“it isn’t abuse, it’s rape”, in Catalan). Demonstrations have been organised throughout the country to demand changes to the law and show solidarity with the teenager.

Just as the attack itself echoes the la Manada case, so too does the decision of the court to charge the accused with the lesser-crime of sexual abuse rather than rape.

By offering an alternative to rape that does not demand proof of physical force, the crime of sexual abuse effectively eschews affirmative consent, a mutually-agreed, unambiguous willingness to participate in sexual activity. As the la Manada retrial proved, many sexual attacks leave the individual unable to resist. Coercion, fear, threat of violence or panic are just some of the reasons people do not – or cannot – fight back. Freezing is also a common, uncontrollable reaction to sexual assault.

Last year, Pedro Sánchez’s Socialist government had promised to reform Spain’s rape laws, abolishing the charge of sexual abuse. In response to the re-sentencing of the Manada rapists, Sánchez tweeted, “Only ‘yes’ means ‘yes’”. Plans to improve the system, however, remain on hold, as the national parliament remains in a deadlock after a general election in April failed to return an overall majority. Negotiations to form a coalition have stalled ever since.

With recent figures showing that only 1.5% of rape cases in the UK lead to a charge, legal failings regarding sex crimes are undoubtedly an international concern. What is particular to Spain, however, is that legislation reinforces the myth that rape always involves brute force. While Carmen Calvo – the country’s acting deputy prime minister – argued gender violence is indicative of sexism that pervades many democratic countries, the murky legal understanding of consent in Spain makes a rape conviction almost impossible.

In a society where the spectre of Franco’s patriarchal, fascist regime lingers, sexual violence laws rest on the misogynistic implication that women are passive sexual partners. Rather than celebrate the re-sentencing of the perpetrators of the la Manada rape, we must interrogate the social and legal structures that made a re-trial necessary in the first place.

While the fallout of the original trial shows that collective feminist protest can, eventually, force change, reports of four more gang rapes in Spain that have emerged in the past month alone demonstrate the political urgency of immediate reform.

Deborah Madden, Lecturer in Hispanic Studies, University of Manchester. This article is republished from The Conversation under a Creative Commons license. Read the original article.