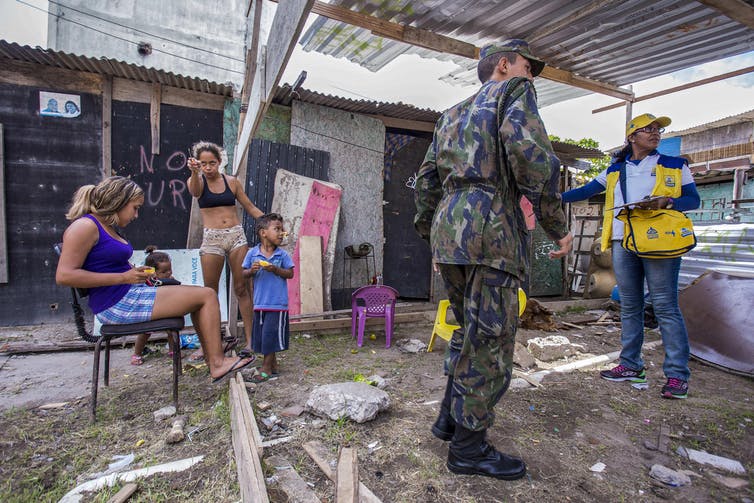 Two years on from the peak of the Zika epidemic, the disease continues to have a tragic impact on people’s lives. In Brazil, more than 3,000 children are suffering from problems with their growth and development. Many more, mostly from the poorer north-eastern parts of the country, are still being diagnosed.

Back in 2016, the outbreak was urgently discussed around the world (Rio was about to host the Olympics) and Brazil’s own government declared “war” on Zika.

Yet the epidemic – and possible solutions – were reported on in ways that failed to address their longstanding socio-economic aspects. Societal factors, such as poverty and gender, which ultimately shape the emergence and development of these kinds of infectious diseases, were ignored. The politics of Zika was left out of the discussion.

In January 2016, after 18 of the country’s 27 states had reported cases of Zika infection, Brazil made its declaration of war on the disease. A month later, after it spread to neighbouring countries, the World Health Organization (WHO) declared Zika a “public health emergency of international concern”.

But by the end of 2016, when WHO had said it would no longer be treating the disease as an international medical emergency, responses to Zika were still being described by the media using the language of war.

With our colleagues Brigitte Nerlich and Rusi Jaspal we examined the way two major Brazilian newspapers – O Globo and Folha de São Paulo – reported and commented on responses to Zika, that language of war targeted two main “enemies”. The first was a collective war focused on eradicating the mosquito. With that came a second, gender-based war against microcephaly, a birth defect associated with the Zika virus. In this battle, the burden of responsibility was put on women, who were expected to adopt preventive measures and avoid pregnancy.

Framing the response to the epidemic as a war means discussion of factors related to inequalities and their connection to the disease are avoided. And it ignores conditions that need to be addressed if Zika is to be properly explained and potentially eradicated in the future. For in a broader public health context, these elements play a vital role in the development of the disease – and the people it harms.

Brazil is the country most affected by Zika and provides a clear example of the importance of social and gender inequalities in the underlying causes of the outbreak. Data from the Brazilian Ministry of Health show the great majority of cases of congenital malformations in babies (potentially linked to Zika, but also connected to other infections like syphilis and rubella) are concentrated in the north-east of Brazil – particularly in the states of Pernambuco, Bahia, Paraíba and Maranhão.

The geography of where Zika spread clearly overlaps with the geography of poverty and inequality in Brazil. The average family income in these four states is 180% lower than parts of the wealthier southern regions.

As for the gender dimension, in Brazil, as elsewhere in South America, women have limited access to contraception, abortion is illegal and rates of sexual violence are high.

In the poorer north-eastern states there are also much higher levels of young pregnancy, much lower levels of education and far fewer women with jobs than in the rest of the country. The so-called “war on Zika” completely fails to address these social factors.

The way in which Zika is framed in the media shapes public opinion in Brazilian society about who is to blame for the outbreak and who is responsible for fixing it. Unfortunately, this approach continues to focus on the cure rather than prevention – and fails to think critically about the politics of the disease.

The vulnerable groups who suffer Zika’s impact the most have been historically excluded from fair wages and decent living conditions. They are not free to make their own decisions about sexual health. They do not have access to good quality public education or health services. They do not enjoy freedom from violence.

Limiting and controlling the Zika virus is important. But dealing with disease control should not distract from alternative views of Zika which connect it to broader social and political trends. These are currently much more peripheral in the public debate.

As a result, the mainstream view serves to distract from the real politics of Zika. The Brazilian and international community should urgently turn their attention to the fundamental socio-economic and gender issues related to the disease – and seek to answer some uncomfortable questions about responsibility and social justice.