Will Alex Salmond’s RT show make him a Kremlin tool?

The decision of former Scottish first minister Alex Salmond to front a weekly political chat show on Russian international channel RT has been widely criticised across the British political and media mainstream. Why would a prominent Western politician risk his reputation by colluding with what many believe to be an propaganda instrument of the Kremlin?

RT’s interest in Salmond is easy enough to fathom. The channel has been sympathetic to Scottish independence, of which Salmond remains a leading proponent. You might expect Putin to back anything that undermines the UK, of course. Hence Sputnik, another state-owned Russian news outlet, recently established an Edinburgh office.

Arguably, RT is more focused on the UK after the US forced it to register as a foreign agent. The Alex Salmond Show was unveiled soon after The Stan Collymore Show, which is a means of extending reach ahead of Russia’s World Cup next year. RT also seems to have a following in Scotland, with pro-independence youth making up a significant proportion of its Twitter followers.

Salmond has been guaranteed full editorial independence, making the show with his own company and not in-house at RT. He points out he has appeared on RT several times and was once very critical of Russia’s actions in Syria. RT often publicises the full independence it grants star presenters, as a point of difference with the likes of the BBC. Larry King’s show is another example and is made by the host’s production company.

The channel formerly known as Russia Today has definitely evolved since its 2005 launch, partly in response to worsening relations between Russia and the West. Having launched to project a positive Russia to the world, it morphed into the channel of choice for those hostile to perceived US hegemony, then became a propaganda weapon for the Russian state in the “information war” that reached its zenith following the 2014 Ukraine crisis.

On the whole, however, RT is a mixed bag. It has broadcast some crude, misleading – and sometimes downright fictitious – material as news. Some shows are so biased as to be an affront to the intellect. Yet other stories really do provide alternative perspectives on important events. RT’s Yemen coverage has been impressive, for example, while large parts of the Western media have turned a blind eye to the conflict.

It is therefore simplistic to characterise RT merely as a tool of Kremlin propaganda, with chief executive Margarita Simonyan dutifully carrying out endless instructions from Vladimir Putin. For one thing, Kremlin narratives must be made suitable for the foreign environments in which RT operates. This means ignoring some Kremlin positions and even contradicting others – RT’s positive promotion of gay culture during the Sochi Olympics was a case in point.

Presenters such as Oksana Boiko, Larry King and George Galloway have strong independent personalities and are never going to be state operatives. Others, including Abby Martin and Martyn Andrews, have been unafraid to contradict Putin in the past (though Martin left in 2015). The further from senior management, the more likely it is that the “Kremlin narrative” will be transformed. 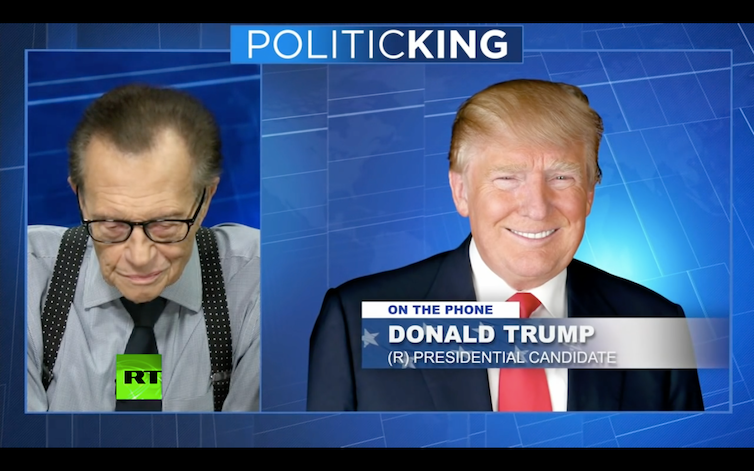 Meanwhile, a US intelligence report earlier this year was probably wrong to conflate RT’s output with the “hackers”, “trolls” and “bots” who interfered in US and French elections (the Western media exaggerated their impact in any case). The report’s credibility was undermined by drawing on material from 2009.

So you need a more nuanced analysis of RT to make sense of why someone like Salmond would work with it. Salmond’s show is a marriage of convenience between two opportunistic agents. It is also an indication of how the ideological landscape has reconfigured over the past two decades – as Western power ebbs to China. Brexit may be the dying gasp of Great Britain, clinging to its image as an imperial power capable of thriving alone; meanwhile, the rise of Scottish nationalism merely confirms the danger of the UK fragmenting.

It should also be said that Putin’s paranoid aggression on the international stage is Russia’s own version of the last imperial gasp. In this sense, the alliance of Salmond and RT is entirely logical: two antagonists seeking to dismantle the British state for different reasons.

The outrage in the UK at RT’s opportunism overlooks the growing global market for alternative output created by changing worldwide attitudes: the growing hostility in many parts of the world to Western superiority, to journalistic objectivity and impartiality, to parliamentary democracy, to Western capitalist monopolies.

Salmond, having exhibited open contempt for the “bias” of the BBC and the London establishment against Scottish nationalism in the past, is clearly confident his RT show will not be met with the same outrage throughout Scotland – albeit current first minister Nicola Sturgeon has taken a different view. All the same, imagine how far removed attitudes are likely to be in Latin America or India or the Middle East.

In the end, Salmond’s initiative is a gamble. Whether British politicians should appear on RT cannot be answered simply. It’s one thing to appear on Worlds Apart, where Boiko conducts interviews in an open and often vicious debate. It’s quite another to appear on RT “flagship show” Cross-Talk, where real debate is usually a pretence and Putin’s critics are outnumbered by his supporters.

Labour leader Jeremy Corbyn and the many other politicians from mainstream British political parties who have appeared on RT presumably consider that the importance of the issues they are appearing to talk about outweigh the risks of being seen to legitimise Putin. Equally, for others, the particular means that is RT will never justify such an end.

Salmond has in the past proved an astute reader of the political runes. RT represents for him a platform for indulging his career and promoting the causes he believes in.

It is therefore premature to conclude that Salmond’s latest venture marks his decline into irrelevance and disrepute. What it means for RT, and for the so-called information war is rather less clear – and perhaps still more intriguing.