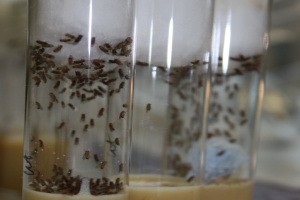 The University of Manchester is leading the way when it comes to fly research with the publication of the first ever basic training package to teach students and scientists how to best use the fruit fly, Drosophila, for research. It’s hoped it will encourage more researchers working on a range of conditions from cancer to Alzheimer’s disease to use the humble fly.

The unique scheme has been put together by Dr Andreas Prokop from the Faculty of Life Sciences alongside John Roote from the Department of Genetics at Cambridge University. A paper outlining the package has been published in the February edition of the journal G3.

The University of Manchester houses one of the biggest fly facilities in Europe, funded jointly by the University and the Wellcome Trust. It provides temperature controlled rooms for storing the many thousands of fly stocks, dedicated work spaces to sort the flies (referred to as "fly pushing") and a number of high tech microscopes for training and experiments. It is used by 13 Manchester research groups for a wide range of research from evolution to cancer and sleep patterns to drug tolerance.

Dr Prokop helped to establish the facility: “People don’t realise just how useful the tiny fruit fly can be when it comes to research. Fellow scientists are often not aware of their genetic value for research. For example, about 75% of known human disease genes have a recognisable match in the genome of fruit flies which means they can be used to study the fundamental biology behind complex conditions such as epilepsy or neurodegeneration.”

Fruit flies have been used for scientific research for more than a hundred years. They have allowed scientific breakthroughs in genetics, body structure and function. The first jet lag gene and the first learning gene were identified in flies as well as breakthroughs in neuroscience, such as the discovery of the first channel proteins.

Dr Prokop says: “Flies need very little space so are ideal for breeding. They develop in just two weeks and it is a simple process to follow a genetic mutation through the generations by analysing the patterns on their bristles, wings or eyes which provide easy visible markers.”

Despite the flies’ contribution to scientific research through the ages, including four Nobel prizes, there is a concern that fewer scientists are aware of their potential. Part of the reason for this has been a trend away from basic genetics training in schools and universities which makes it harder for newcomers to the fly.

To combat this Dr Prokop put together a training package for second year undergraduate students. Unlike any other material it assumes no prior knowledge of flies and takes students back to basics.

Together with John Roote, the manager of a fly facility in Cambridge, Dr Prokop has now taken the student manual to the next level, developing it into a four part training package for all scientists.  It includes a self-study introductory manual, a short practical session on gender and marker selection, an interactive Powerpoint presentation and finally an independent training exercise in mating scheme design.

Sanjai Patel manages Manchester’s fly facility and says the training package has had a real impact: “I was spending a lot of my time at the facility training students how to use the flies for their research. They would struggle with some of the basic concepts of fly research and keep coming back with questions. The training manual is self-explanatory. After they’ve been through it I do an intense but brief session with them to assess their understanding and then they’re usually confident enough to start using the flies. The training package means I spend a lot less time teaching students the basics.”

Dr Prokop says it’s a well rounded package: “We wanted to make sure that key aspects of fly research become apparent to the newcomer right away, such as a basic appreciation of why Drosophila is used for research, the nature of the fly stocks we use, an understanding of classical genetic rules and the knowledge of the nature and use of classical genetic markers but also the use of modern transgenic technologies.”

He continues: “We’ve had a really good response from people who’ve tested the training package and we’re confident this will encourage more scientists to consider using the fruit fly in the future.”

Images of the fly facility and fruit flies can be obtained from the press office.

Dr Prokop is available for interviews.

The paper providing details of the training package has been published in the February edition of G3 titled: “How to design a genetic mating scheme: a basic training package for Drosophila genetics”.

The training package can be downloaded for free here.