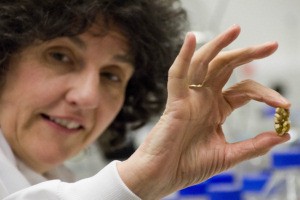 The world's biggest ever study of allergies - spearheaded by the University of Manchester - officially gets underway today.

The €9million project builds on an earlier €14.3 million research study and will involve the worlds leading experts in the UK, Europe, Australia and US. Together they mark the biggest study of food allergy in the world.

Up to 20 million European citizens suffer from food allergy. However management of both food allergy, by patients and health practitioners, and allergens, by industry, is thwarted by lack of evidence to either prevent food allergy developing or protect adequately those who are already allergic. European Commission-sponsored research, known as the Integrated Approaches to Food Allergen and Allergy Risk Management (iFAAM), will produce a standardised management process for companies involved in food manufacturing. It will also develop tools designed to enforce these regulations and produce evidence-based knowledge to inform new health advice on nutrition for pregnant women, babies and allergy sufferers.

The Manchester team will work with 38 partners including, industrial stakeholders (represented by Unilever and Eurofins), patient groups representing people at risk of severe allergic reactions from Germany, UK and Ireland and a risk manager and assessor group including the UK Food Standards Agency. The project will work loosely with the clinical community, working in collaboration with the European Academy of Allergy and Clinical Immunology.

Professor Clare Mills, from the Allergy and Respiratory Centre of The University of Manchester's Institute of Inflammation and Repair and based in the Manchester Institute of Biotechnology, will head the study. Professor Mills said: "This is a massive research project which will have far reaching consequences for consumers and food producers. The evidence base and tools that result from this will support more transparent precautionary “may contain” labelling of allergens in foods which will make life easier for allergy sufferers as they try to avoid problem foods.”

Nikolaos Papadopoulos, Head of Allergy Department, University of Athens and President Elect EAACI, said: "Food Allergy is a disease that can be conquered, if critical steps are taken. iFAAM sets the stage for facilitating such steps to be taken."

Dr Bert Popping, Eurofins Scientific Director, said: “Eurofins is excited to be part of this European Commission project. We are looking forward to sharing our newly-developed multiple allergen detection method and making a meaningful contribution to this crucial initiative.”

Sue Hattersley, Head of the UK Food Standard’s Agency’s Allergy Branch said: “We welcome the launch of the iFAAM, which the FSA will be supporting through some of our own current research projects. We anticipate that the information learned through iFAAM will help determine a more consistent approach to providing consumers with information, so they can make safe choices about the food they eat. Furthermore it has the potential to provide a much greater insight into the development of food allergies – and, from an industry and regulatory perspective, more guidance and a big impact on the management of allergens in food manufacturing and production.”
There is currently a list of foods considered to be responsible for triggering the majority of allergies across the world which includes milk, egg, peanuts, soya, wheat, tree nuts, mustard, lupin, fish, crustacean and molluscan shell fish and celery which have to be labelled irrespective of the level at which they are included in a recipe. However, management of food allergens that accidently find their way into foods which might otherwise be free of allergen, for example through the use of common processing equipment, remains problematic and often gives rise to precautionary “may contain” labels.

New risk models will be built on pre-existing clinical data sets to support management of these allergens in a factory environment to minimise the use of such labels. Other researchers will look at tools to measure allergens in food to allow validation and monitoring of allergen management plans. Other strands of the project will seek to predict who is likely to suffer a severe reaction, identify whether early introduction of allergenic foods and other nutritional factors may be protective against development of allergies later on in life.

Regina Cahill, of Anaphylaxis Ireland, said better labelling would benefit suffers. She said: “Careful scrutiny of food labels is an essential part of daily life for food allergic individuals and their families. The widespread use of ‘may contain...’ statements is both frustrating and limiting for allergic consumers. This type of precautionary statement can often leave consumers wondering if the product is likely to contain the allergen mentioned and can lead to risk taking. The development of safe allergen thresholds would give the food industry guidelines to work within and would hopefully lead to a welcome reduction in the use of ‘May contain ...’ statements.”

The research project, which is expected to take three years to complete, will also work with groups of babies and groups of children who have been followed from birth in a number of countries including the UK to look at allergy and give advice on diet in pregnancy and early life.

Professor Mills is available for interview.

High resolution images of Professor Mills in her lab are available on request.