Writing is not for the old, says Amis. Yes it is, says James
Newsroom

Writing is not for the old, says Amis. Yes it is, says James 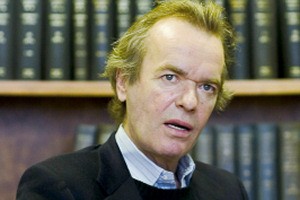 Renowned novelist Amis, who is a Professor of Creative Writing at The University of Manchester, told the audience that writers are past their prime once they reach old age.

Philip Roth, Vladimir Nabokov and John Updike, he said, were examples of how older writers lose their literary skills.

Not so, said respected novelist, poet and broadcaster James, who cited Tolstoy, Goethe and Yeats as writers who hit new heights in old age.

The Manchester Review is published by The University of Manchester’s Centre for New Writing, home to leading literary figures including Amis.

Four Amis public debates are organised every year by the Centre, where he is based.

Amis told the audience at the University's Martin Harris Centre : “Old age is not for old people. It’s like starring in a low budget horror film, saving the worst till last.

“Saul Bellow published in his mid-80s a charming but slight novel called Ravelstein - but nothing like the mighty longer novels.

“The great stylist John Updike’s ear went and he was reduced to writing [poor] sentences. The idea of not spotting clunking repetition is a terrifying indictment of failing powers.

“And Philip Roth lost the ability to breath life into his characters.

“I hope and expect to have a good last period. But there are things that science can tell us - we all face a shrinking vocabulary. I reach for the thesaurus more often than I used to.”

“I am 70 and I feel within myself a new strength - especially in poetry and there’s a simple reason for it: my work depends on reflecting experience and at this age I’ve a lot of experience to reflect on.

“I have every intention of employing this time in my life for creative profit.

“I probably can’t still produce the glittering phrase out of thin air: there’s something in the argument that lyric talent goes off with the years.

“But poetry is not all lyricism and many great poets mature in old age because they have more and more to say.

“The later years are creative years: we’re not going into the dark, but into the light.

“Goethe was 81 years old when he met Ulrike von Levetzow and fell in love with her. She was 19 and he made an utter fool of himself - he was a laughing stock.

“But out of it he wrote a poem - the Marienbad Elegy- which is one of the greatest poems in literature.

“Yeats exploited the power of reflection, a transparency denied to the young. His later poems are some of the greatest in English. These magnificent works could only be produced by an old man.”

The Manchester Review  nurtures and promote the best emerging talent as well as featuring new work.