Stuart, originally from Scotland, was a Res life advisor in our halls last year and here, talks about his experience living in Whitworth Park while studying for his PhD in Organic Chemistry at the University.

Why did you choose City accommodation?

Actually, I didn’t! I’m a ResLife Adviser; we only get to choose catered or self catered accommodation. I feel pretty lucky to be placed in the University’s most convenient location on campus. Whitworth Park is a stone’s throw from the Students’ Union, as well as tonnes of other amenities. It has a private bar and gym onsite which is pretty impressive. There’s usually some sort of entertainment organised for the end of the week in the bar to kick-start your weekend. 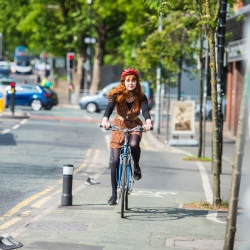 What makes it great?

I’m really happy with the people. I love the entire ResLife team; they’re all buzzed and ready to do things. The first-years initially saw us as “authority”, but I liked to throw questions at them, engage them in conversation. Now they’re like: okay, you’re cool!

It’s so close; I feel like I have extra hours in my day. I cycle everywhere, so I’m back from campus almost immediately, and I can walk home from nights out.

I was sceptical at first. I thought: I don’t want to hang around with freshers, being responsible for other people. Then my friend told me about organising social activities and events; it sounded amazing. It’s like being a fresher, but better: meeting new people, but with this bank of knowledge about university. ResLife is good for student wellbeing. Most don’t need help, but university can be a culture shock to others. We’re not their crutch; we’re a signposting system, helping them to help themselves.

Sociability. I didn’t realised how much I would love living with eight people. I only use my room for sleeping; otherwise I’m in the kitchen, having conversations. The Resident’s Association and Junior Common Rooms run socials and subsidise trips – and I help out. I’ve got all these ideas; I just want to do more and more.

Who would belong in City accommodation?

Anyone who doesn’t like commuting! And it’s the perfect social middle ground – not too busy, but with a community feel. Then there are big supermarkets, the campus, Manchester Aquatics Centre. You’re in the middle of it all.

Read more about our student's experiences.

Find out about your accommodation options.