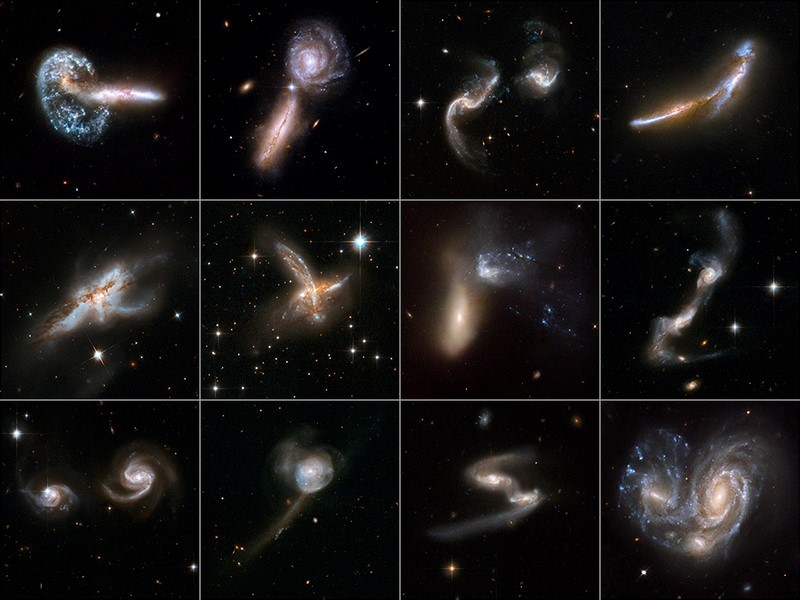 Examples of galaxy pairs found in this study – here are examples of detected systems which are within close proximity to each other Credit- C.Mundy C.Conselice et al

Astronomers in the UK announce today that have established how galaxies like our own Milky Way formed over 10 billion years of cosmic time through an abundance of separate galaxies colliding together.

Galaxies are the largest single objects in the universe, and the origin of their formation is a very old question without any obvious answers. A major study submitted this week to the American Astronomical Society’s Astrophysical Journal has provided a solution to this problem.

Astronomers led by Professor of Extragalactic Astronomy, Christopher Conselice at The University of Manchester, have now established that this effect of merging is one of the dominant processes whereby galaxies come to be.

These researchers have concluded this decades-long study of galaxies and how they formed over the past 10 billion years revealing that these galaxy mergers are one of the most important methods for forming galaxies. The average massive galaxy over the past 10 billion years will undergo around 3 mergers with other galaxies, which will more than doubles their mass. This study has thus shown that mergers are a very effective way for galaxies to form.

“This also suggests that our own Milky Way galaxy has likely undergone at least one of these significant mergers during its history, which radically changed its shape and formation history,” Said Professor Conselice. “Mergers, such as the ones in this study, trigger star formation, which may be the origin event for how stars including our own Sun formed, as well as feed the matter that grows central black holes.”

Galaxies in the nearby universe come in all shapes and sizes. Some of them, including our own, are very massive with over a trillion stars and a spiral pattern. Others are enormous collections of stars with a spheroidal or ellipsoidal structure with no particular patterns. The history of these enormous systems is largely unknown.

Due to the total number of galaxies in the universe, over the past 10 billion years, about 2 trillion of these merger events would have occurred. Many of these events will be detectable with upcoming gravitational wave experiments as these are the most common massive coalescence events to occur in the universe.

One possible way in which galaxies can grow in mass is when two galaxies smash together to form an entirely new galaxy, a process known as merging.  Galaxy mergers have been known for over half a century, but their role in how we obtain the massive galaxies we see today has always been an enormous mystery and a fundamental question in cosmology.  While a favorite theoretical idea, we could previously only guess at how the process has actually occurred.

The result of this study originates from searching back 10 billion years for galaxies in close proximity, or those that are in ‘pairs’. These close galaxies will eventually merge together to form a new system over the course of a billion years. By catching these galaxies in the merger process, this study determined the merger history, and thus the formation history of galaxies in the universe. Before this study, mostly only theoretical estimates of this have been available. This study is a direct measurement of this process.

Conselice said, “Due to the total number of galaxies in the universe, over the past 10 billion years, about 2 trillion of these merger events would have occurred. Many of these events will be detectable with upcoming gravitational wave experiments as these are the most common massive coalescence events to occur in the universe."

This previously unknown history now allows us to understand galaxies in a way that we have not previously. Future work by this team and others will reveal the implications for this finding for understanding the development of new stars and black holes in galaxies over this cosmic epoch.