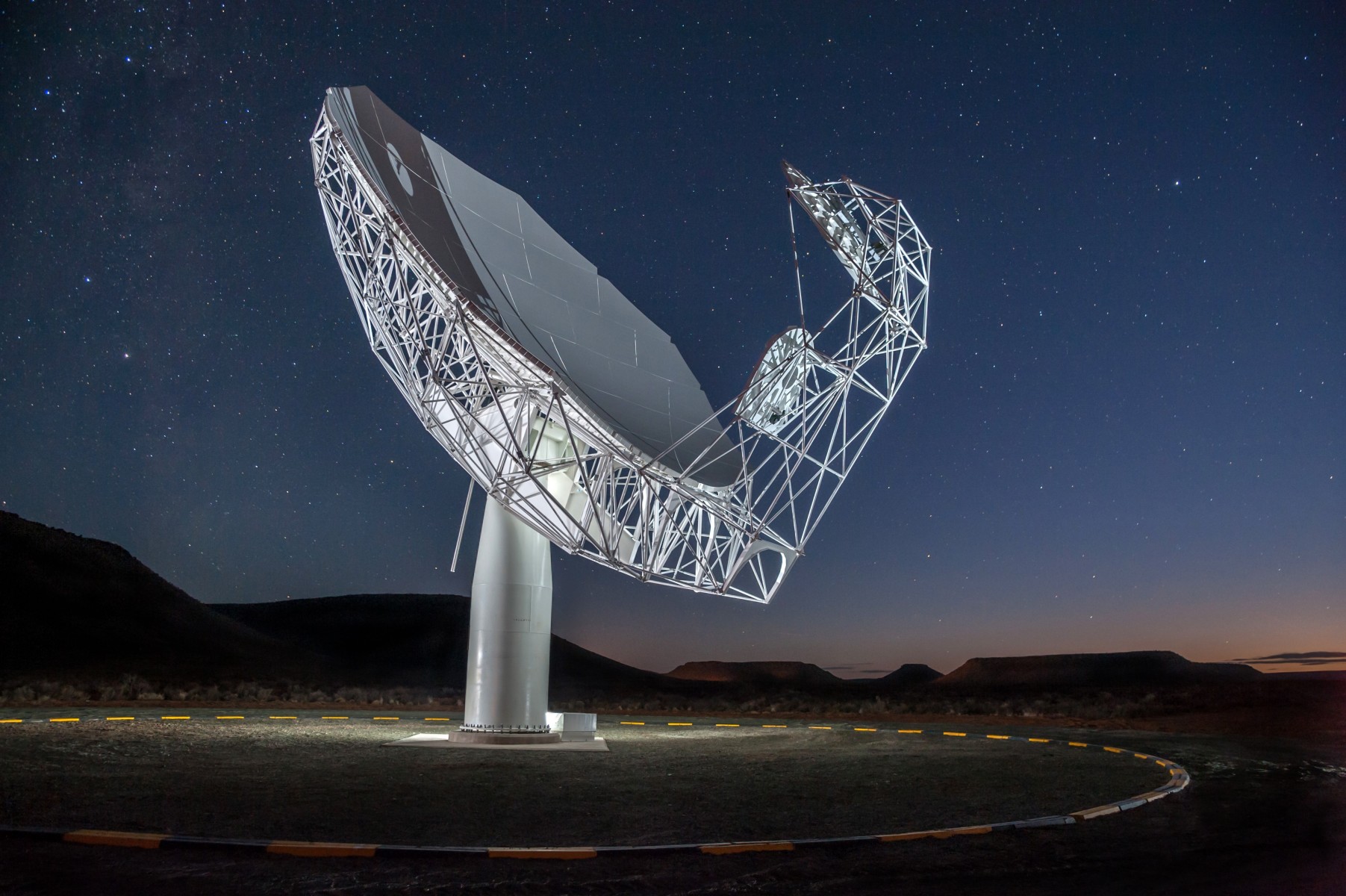 An international team of astronomers have for the first time combined the power of 64 radio telescope dishes to detect the faint signatures of neutral hydrogen gas across cosmological scales.

The feat was achieved using the South African-based MeerKAT telescope, a precursor to the world’s largest radio observatory, the SKA Observatory (SKAO), which will probe the Universe in unprecedented detail.

A primary aim for the SKAO is to understand the evolution and content of the Universe along with the mechanisms which drive its accelerating expansion. One way to achieve this is by observing the Universe's structure on the largest scales. On these scales, entire galaxies can be considered as single points and analysis of their distribution reveals clues about the nature of gravity and mysterious phenomena such as dark matter and dark energy.

Radio telescopes are a fantastic instrument for this since they can detect radiation at wavelengths of 21cm generated by neutral hydrogen, the most abundant element in the Universe. By analysing 3D maps of hydrogen spanning millions of light-years, we probe the total distribution of matter in the Universe.

The SKAO, which has its headquarters based at Jodrell Bank, Cheshire, is currently under construction. However, there are already pathfinder telescopes, such as the 64-dish array MeerKAT, in place to guide its design. Based in the Karoo Desert and operated by the South African Radio Astronomy Observatory (SARAO), MeerKAT will eventually go on to be a part of the full SKAO.

MeerKAT and the SKAO will primarily operate as interferometers, where the array of dishes are combined as one giant telescope capable of imaging distant objects with high resolution. “However, the interferometer will not be sensitive enough to the largest scales most interesting for cosmologists studying the Universe.” explained the co-lead author of the new research paper, Steven Cunnington. “Therefore, we instead use the array as a collection of 64 individual telescopes which allows them to map the giant volumes of sky required for cosmology.”

For many years I have worked towards forecasting the future capability of the SKAO. To now reach a stage where we are developing the tools we will need and demonstrating their success with real data is incredibly exciting. This only marks the beginning of what we hope will be a continuous showcase of results which advances our understanding of the Universe.

The single-dish mode of operation has been driven by a team at the University of the Western Cape, with several observations already conducted with MeerKAT. This ambitious project involves many other institutions spanning four continents. In the new research released on arXiv and submitted for publication, a team which includes Manchester-based astronomers Steven Cunnington, Laura Wolz and Keith Grainge, present the first ever cosmological detection using this single-dish technique.

The new detection is of a shared clustering pattern between MeerKAT's maps and galaxy positions determined by the optical Anglo-Australian Telescope. Since it is known that these galaxies trace the overall matter of the Universe, the strong statistical correlation between the radio maps and the galaxies shows the MeerKAT telescope is detecting large-scale cosmic structure. This is the first time such detection has been made using a multi-dish array operating as individual telescopes. The full SKAO will rely on this technique and this therefore marks an important milestone in the roadmap for the cosmology science case with the SKAO.

“This detection was made with just a small amount of pilot survey data,” revealed Steven Cunnington. “It’s encouraging to imagine what will be achieved as MeerKAT continues to make increasingly larger observations.

"For many years I have worked towards forecasting the future capability of the SKAO. To now reach a stage where we are developing the tools we will need and demonstrating their success with real data is incredibly exciting. This only marks the beginning of what we hope will be a continuous showcase of results which advances our understanding of the Universe.”