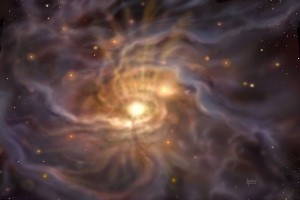 Scientists have observed in unprecedented detail the birth of a massive star within a dark cloud core about 10,000 light years from Earth.

The team used the new ALMA (Atacama Large Millimetre/submillimetre Array) telescope in Chile – the most powerful radio telescope in the world – to view the stellar womb which, at 500 times the mass of the Sun and many times more luminous, is the largest ever seen in our galaxy.

The researchers say their observations – to be published in the journal Astronomy and Astrophysics – reveal how matter is being dragged into the centre of the huge gaseous cloud by the gravitational pull of the forming star – or stars – along a number of dense threads or filaments.

“The remarkable observations from ALMA allowed us to get the first really in-depth look at what was going on within this cloud,” said lead author Dr Nicolas Peretto, from Cardiff University. “We wanted to see how monster stars form and grow, and we certainly achieved our aim. One of the sources we have found is an absolute giant — the largest protostellar core ever spotted in the Milky Way!

“Even though we already believed that the region was a good candidate for being a massive star-forming cloud, we were not expecting to find such a massive embryonic star at its centre. This cloud is expected to form at least one star 100 times more massive than the Sun and up to a million times brighter. Only about one in 10,000 of all the stars in the Milky Way reach that kind of mass.”

Different theories exist as to how these massive stars form but the team’s findings lend weight to the idea that the entire cloud core begins to collapse inwards, with material raining in towards the centre to form one or more massive stars.

Co-author Professor Gary Fuller, from The University of Manchester, said: "Not only are these stars rare, but their births are extremely rapid and childhood short, so finding such a massive object so early in its evolution in our Galaxy is a spectacular result.

“Our observations reveal in superb detail the filamentary network of dust and gas flowing into the central compact region of the cloud and strongly support the theory of global collapse for the formation of massive stars.”

The University of Manchester hosts the Science and Technology Facilities Council (STFC)-funded support centre for UK astronomers using ALMA, where the observations were processed.

Team member Dr Ana Duarte-Cabral, from the Université de Bordeaux, said: “Matter is drawn into the centre of the cloud from all directions but the filaments are the regions around the star that contain the densest gas and dust and so these distinct patterns are generated.”

Dr Peretto added: “We managed to get these very detailed observations using only a fraction of ALMA’s ultimate potential. ALMA will definitely revolutionise our knowledge of star formation, solving some current problems, and certainly raising new ones.”

High-resolution images, including an artist’s impression of the developing star/cloud system, are available through the Manchester press office. (Credit: David A. Hardy/www.astroart.org)

A copy of the paper, entitled ‘Global collapse of molecular clouds as a formation mechanism for the most massive stars,’ published in Astronomy & Astrophysics, is also available ahead of publication.

Astronomers use the expression “massive stars” to mean those with roughly ten or more times the mass of the Sun. It refers to the star’s mass, not its size.

This star formation region is forming many stars. The 500 solar mass core is the most massive of several.

The Atacama Large Millimeter/submillimeter Array (ALMA), an international astronomy facility, is a partnership of Europe, North America and East Asia in cooperation with the Republic of Chile. ALMA is funded in Europe by the European Southern Observatory (ESO), in North America by the US National Science Foundation (NSF) in cooperation with the National Research Council of Canada (NRC) and the National Science Council of Taiwan (NSC) and in East Asia by the National Institutes of Natural Sciences (NINS) of Japan in cooperation with the Academia Sinica (AS) in Taiwan. ALMA construction and operations are led on behalf of Europe by ESO, on behalf of North America by the National Radio Astronomy Observatory (NRAO), which is managed by Associated Universities, Inc. (AUI) and on behalf of East Asia by the National Astronomical Observatory of Japan (NAOJ). The Joint ALMA Observatory (JAO) provides the unified leadership and management of the construction, commissioning and operation of the telescope. ALMA, which was officially inaugurated in March this year, is operated by a worldwide collaboration that includes the European Southern Observatory (ESO) and is expected to come in to full operations in late 2014.

ESO is the foremost intergovernmental astronomy organisation in Europe and the world’s most productive ground-based astronomical observatory by far. It is supported by 15 countries: Austria, Belgium, Brazil, the Czech Republic, Denmark, France, Finland, Germany, Italy, the Netherlands, Portugal, Spain, Sweden, Switzerland and the United Kingdom. ESO carries out an ambitious programme focused on the design, construction and operation of powerful ground-based observing facilities enabling astronomers to make important scientific discoveries. ESO also plays a leading role in promoting and organising cooperation in astronomical research. ESO operates three unique world-class observing sites in Chile: La Silla, Paranal and Chajnantor. At Paranal, ESO operates the Very Large Telescope, the world’s most advanced visible-light astronomical observatory, and two survey telescopes. VISTA works in the infrared and is the world’s largest survey telescope and the VLT Survey Telescope is the largest telescope designed to exclusively survey the skies in visible light. ESO is the European partner of a revolutionary astronomical telescope ALMA, the largest astronomical project in existence. ESO is currently planning the 39-metre European Extremely Large optical/near-infrared Telescope, the E-ELT, which will become “the world’s biggest eye on the sky”.

Access to ESO telescopes is made possible for UK astronomers by a subscription paid for by STFC.