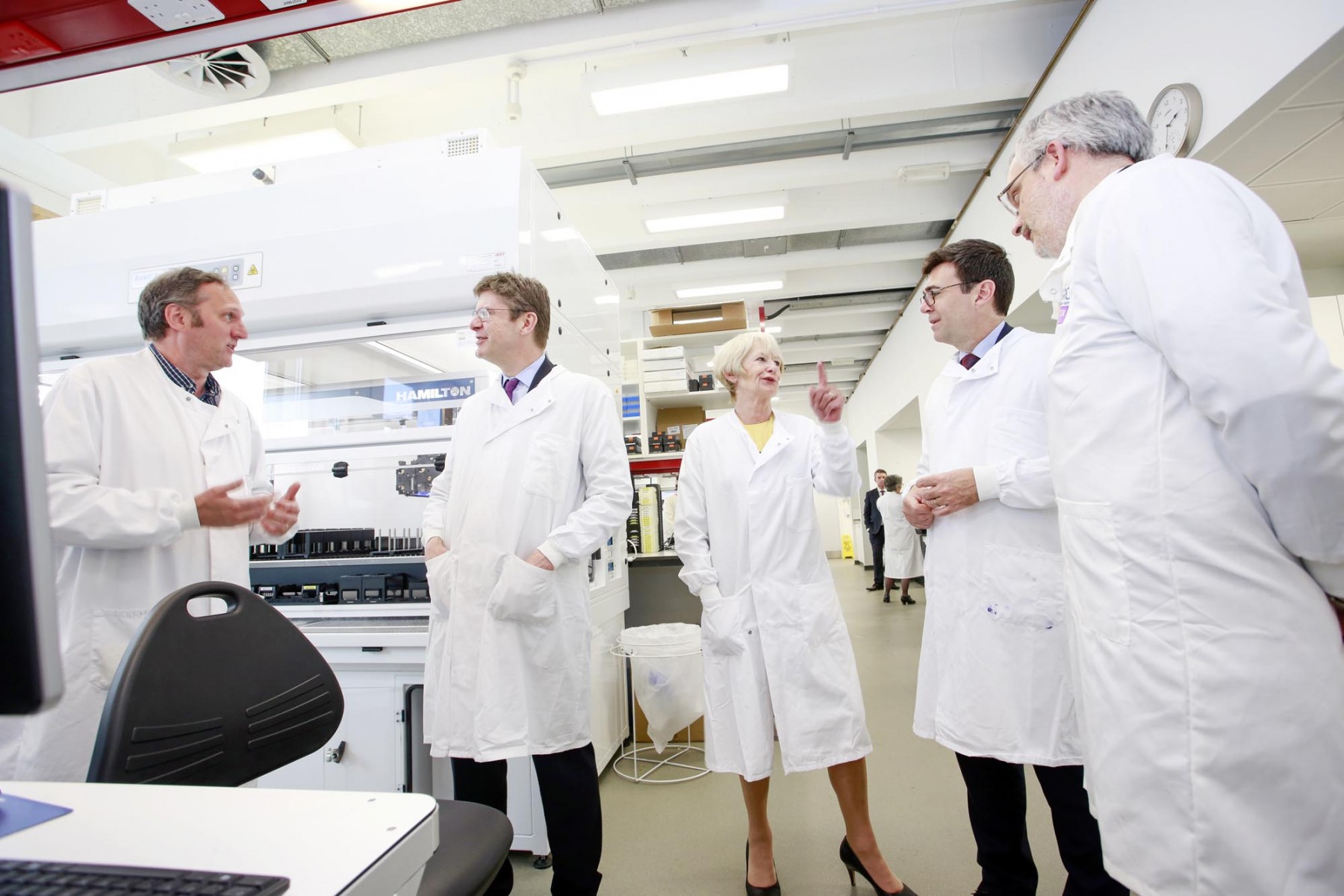 A new facility to transform manufacturing processes and make them more environmentally friendly, has opened today (13 June 2019), as part of a new Local Industrial Strategy for Greater Manchester.

Based at the Manchester Institute of Biotechnology (MIB), here at the University, the new Future Biomanufacturing Research Hub is backed by £10 million in government investment to develop new technologies to transform the manufacturing processes of chemicals, using plants, algae, fungi, marine life and micro-organisms – both driving clean growth and making it more commercially viable. The institute will also work alongside universities including Imperial College London, the University of Nottingham and the University College London.

This Manchester facility will be one of three – with the Universities of Swansea and Sheffield also set to host similar hubs, each also benefiting from £10 million government investment.

The strategy will build on Manchester’s worldwide reputation and unique strengths to ensure it is at the centre of the industries and jobs of the future. President and Vice-Chancellor, President Dame Nancy Rothwell, says: “With the Manchester Institute of Biotechnology (MIB), the University already has world-leading facilities and capabilities in bio-based chemicals synthesis and manufacture.

“The addition of the Future Biomanufacturing Research Hub, which is being launched as part of the Greater Manchester Local Industry Strategy, will take that expertise to an even higher level, allowing us to work more closely with industry and other relevant partners such as Shell and AstraZeneca.

“The strategy itself is based on extensive discussions, consultations and inputs, and presents an exciting opportunity for the future success of Greater Manchester.”

The strategy also unveils plans for Greater Manchester to become the UK’s first city-region to achieve carbon neutral living by 2038 as well as plans to further develop the region’s leading position in the manufacturing of advanced materials such as graphene, health innovation, and digital and creative sectors that have fuelled growth in the region.

Business Secretary Greg Clark, who is launching the hub on campus, added: "Greater Manchester has a strong and proud manufacturing heritage and this new Local Industrial Strategy, developed in partnership between government and local leaders across the city-region, will ensure its world-leading position in this field is secured and built on for the next generation.

"At the heart of this strategy is clean growth and Manchester’s determination to reap the rewards of the UK’s transition to a net-zero economy reinforced by the city region’s ambition to be the first carbon neutral city in the UK by 2038.

"That’s why I’m also pleased that The University of Manchester will be home to the new biomanufacturing hub, backed by £10 million government investment, putting the city at the forefront of exciting new developments to drive clean growth – a prime example of our modern Industrial Strategy in action."

With the Manchester Institute of Biotechnology (MIB), the University already has world-leading facilities and capabilities in bio-based chemicals synthesis and manufacture. The addition of the Future Biomanufacturing Research Hub, which is being launched as part of the Greater Manchester Local Industry Strategy, will take that expertise to an even higher level.

Professor Dame Nancy Rothwell, President and Vice-Chancellor of The University of Manchester
„

Professor Scrutton, Director of the Manchester Institute of Biotechnology, added: "The fact MIB in partnership with other leading UK centres has secured such a high-priority government research and manufacturing initiative is a testament to the outstanding work we undertake here every day and it will keep us at the vanguard of industrial biotechnology.”

The Greater Manchester Local Industrial Strategy puts clean growth at its heart with plans for the city-region to cut its carbon emissions, take advantage of the global shift to clean growth and the UK’s transition to net-zero.