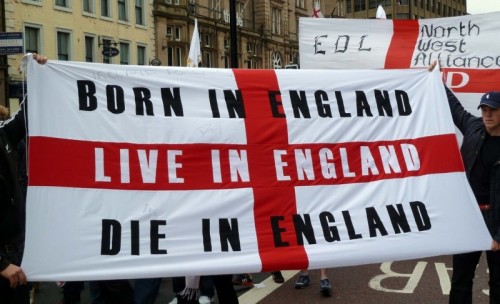 A new book taking an inside look at the English Defence League (EDL) suggests the UK may not be as immune to the populist radical right wave sweeping Europe and North America as previously thought.

Using interviews, informal conversations and extended observation at EDL events the book, written by Professor Hilary Pilkington of The University of Manchester, explores the movement from the inside and the everyday lives of its activists.

For more than three years she spent time with grassroots activists in the movement. In the book Professor Pilkington reveals a complex and often conflicted picture of the EDL that goes beyond the stereotypical image of its members being “drunken racist football hooligans”.

Professor Pilkington said: “The anti-Islam chants of demonstrators seem to confirm that Muslim communities are the new target of old racism. But the diversity of views and behaviours witnessed in the movement suggests the distinctions between racism and anti-Muslim and anti-Islam sentiment need to be understood more complexly.

“I discovered among grassroots activists a genuine aspiration to non-racism born of the fact that their own diverse family and friendship groups reflect everyday lives in multicultural Britain. They are adamant that they are not racist, or even anti-Muslim, but simply ‘standing up’ to what they perceive to be a dangerous ‘ideological’ dimension to Islam.’”

During the study, Professor Pilkington also discovered that Islam is singled out as a ‘problem’ by activists in a way that other aspects of multicultural society are not. And that being anti-Islam does not exclude being anti-Muslim as well.

“This was evident from the slippage in distinctions between Islam and Muslims among some activists,” she said, “especially at demonstrations, generalised terms of abuse towards Muslims can also be heard.

”The EDL activists, according to Professor Pilkington, reposition themselves as the ‘victims’.

“They perceive themselves as ‘second-class citizens’ whose needs are deprioritised by the ‘liberal do-gooder’ elite while they are disadvantaged and discriminated by a ‘two-tier’ justice system weighted against them,” she said.

“The activists I spoke to don’t recognise themselves as a privileged white majority,” continues Pilkington, “which explains why ostensibly intimidating EDL street demonstrations marked by racist chanting and nationalistic flag waving are understood by activists themselves as standing ‘loud and proud’; the only way of ‘being heard’ in a political system governed by a politics of silencing.”“

Insights from the book should not be used to condone or justify the EDL but as a way in to thinking about a range of political frustrations held amongst many more people than attend dwindling EDL demonstrations,” concluded Professor Pilkington.

They perceive themselves as ‘second-class citizens’ whose needs are deprioritised by the ‘liberal do-gooder’ elite while they are disadvantaged and discriminated by a ‘two-tier’ justice system weighted against them.