Breakthrough research could speed up the recovery of injured athletes
Newsroom

The latest news about advanced materials

Breakthrough research could speed up the recovery of injured athletes 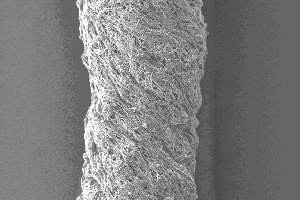 A tendon can be one of the most common and frustrating injuries for an athlete - often forcing them to stay away from the sports field for up to eight weeks.

But now the pioneering research of a University of Manchester student could be about to speed up the recovery process.

Lucy Bosworth, from the University's School of Materials, has developed a way of spinning biodegradable nanofibres into a 'fabric' that could be used in the body as an artificial tendon.

The artificial tendon can be surgically grafted onto the site of an injury, where it encourages the injured tendon to grow and repair, before safely degrading.

And that, researchers believe, would dramatically decrease the time needed for a tendon to heal.

Currently patients face the choice of having a tendon from another part of the body surgically grafted onto the injury site or completely resting the injured area for a significant period of time.

Grafting a tendon from another part of the body creates a second site in the body that needs to heal. And the alternative of enforced rest for a number of weeks can be unpopular, especially for those who are committed to their sport.

Lucy says that using the artificial tendon would take away the need to operate on a second site in the body, which speeds up the recovery time.

And she believes the alternative approach would be of particular interest to athletes - amateur and professional - who are keen to speed up the time it takes for tendon injuries to heal.

Lucy is about to start the pre-clinical stage of her artificial tendon research. And she says they could be used in hospitals in less than three years.

"Tendons have a poor healing response," said Lucy, who is part of the School's Biomaterials Group. "If you damage them they often don't heal back to their original strength, you do get a lot of scar tissue and you can have ongoing pain.

"The way they are treated at the moment is with a graft where tendon is taken from somewhere else. But this creates two sites of injury or if you have a graft from someone else there is a chance of rejection.

"With ours it would just be a one-off surgery - you could even have it as a support mechanism before a tendon was to rupture.

"We are increasingly focusing on early sports injuries. Football and rugby players have a lot of tendon injuries and they really want to reduce their rehabilitation time.  They don't want to be sitting around for six weeks waiting for it to heal."

Lucy creates the artificial tendons with a bio-polymer, which is a degradable polymer than can be used inside the body.

Lucy has developed a method of adapting the polymer fibres to a structure that's similar to tendon tissue and mimics natural tissue.

So far the project has benefited from an investment from the UMIP Premier Fund (UPF), managed by technology Venture Capital specialists, MTI Partners.

Now the virtual research centre RegeNer8 has made a grant of £50,000 to the University so that Lucy can continue with her research.

Professor Sandra Downes, from the School of Materials, said: "This is a major breakthrough, because currently there is no clinically available artificial tendon scaffold.

"This research is leading edge. And it is a major achievement for a PhD student to come up with something so significant.

"Our work in this area should lead to significant benefits for patients with tendon injuries in the future and we are pleased that this has been recognised by regeNer8."

Lucy Bosworth and Sandra Downes are available for interview.

RegeNer8 is one of the five virtual research centres that have been established by N8 through the Northern Way initiative, to promote scientific, social and economic development in the North of England. The centre will accelerate the development of regenerative therapies and bring them through to clinic and market. For more information see www.regener8.ac.uk.

The UMIP Premier Fund (“UPF”) invests in businesses emerging from The University of Manchester’s ‘5-star’ rated academic departments. The University’s technology transfer company, UMIP undertakes the stringent business selection of the investments and the fund is managed by the UK’s leading technology investment manager, MTI. The Fund will primarily make late-seed stage investments, in a total of 15 - 20 companies, initially in the £250k - £750k range, with both the intention and capacity to provide follow-on investment up to £3m. For more information see www.upf.com.