During lockdown, we saw how the pandemic was leading to new forms of social solidarity. In addition to claps for carers and rainbow pictures, the very act of staying home was a demonstration of a collective responsibility to protect the vulnerable. It was a sacrifice for the “greater good”, adhered to by all but a well publicised minority.

However, in our ongoing research – in which we’re exploring public attitudes to COVID-19 and social distancing – we’re finding that people are stigmatising those who might have the disease or might transmit it. At its core, this stigmatisation is based on what social scientists call “othering”. This is where we define, often negatively, certain individuals or groups in terms of how they are different from us. Othering is at the root of stereotyping and discrimination.

Most if not all infectious diseases are stigmatising to some extent, precisely because coming into contact with those who have the disease may lead to us becoming sick. But the fact that COVID-19 is a new disease with no cure or vaccine – and (compared say to flu) has a relatively high case fatality rate – adds to the fear factor that often drives othering. Stigma can also, as we are seeing in this pandemic, potentially undermine efforts to control and fight disease.

How stigma is playing out

Our research shows that what were once relatively innocuous behaviours like coughing and sneezing are now being experienced as significant, dramatic, anxiety-provoking events. For example, one participant, who has a long-term cough from being a smoker, reported feeling as though they were being treated like a “leper” while out shopping. 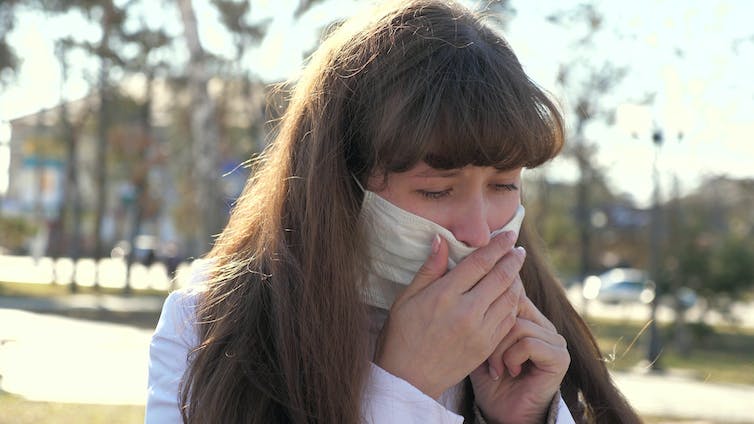 Not wearing a mask in public divides public opinion – but face coverings are soon to become compulsory in UK shops. Zoteva/Shutterstock

Another participant, a hay fever sufferer, reported feeling “on edge” going out for fear of sneezing and worrying over what people might think or say. Many of our participants also described strong reactions to others’ coughs and sneezes in public spaces:

It’s interesting how we have gone from being polite and saying “bless you” to now having to defend people’s coughs and sneezes. If somebody does cough, it draws a really strong negative reaction towards them.

Often these reactions were expressed as anger toward those getting too close or not adhering to new social norms, such as sneezing into the elbow. We’ve also seen general condemnation of those perceived not to be adhering to social distancing rules, for example by getting too close to others in shops or on pavements. Of course, where distancing and hygiene guidelines are being blatantly flouted, frustration and anger are arguably both expected and justified.

There is also a broader form of othering taking place between people with different interpretations of the guidelines, or between those who have differing opinions over whether those guidelines are too cautious or not cautious enough. For example, in our research we found a general division between those who were keen to be “living completely as normal” as soon as possible and those who felt things were moving too fast. Those who were taking advantage of or stretching the guidelines were deemed “inconsiderate” and a source of “frustration”.

As we continue to emerge from lockdown and socially reintegrate, the rules on how to behave – and what we can and can’t do in public – are getting increasingly complex. We can expect new forms of social division and social stigma to emerge as a result.

The worry is that this divisiveness will deepen over the course of the pandemic as measures continue to ease. The real problem is that official guidelines have often lacked clarity. It’s little wonder that the recent government equivocation around facemasks is a source of contention. Conversely, clear guidelines can help to reduce othering and divisiveness by reducing confusion and uncertainty around what is or isn’t acceptable.

There’s a clear need to avoid social division. Research on past pandemics has shown how stigma can seriously delay detection and treatment efforts, cooperation with contact tracing and isolation measures, and the effective distribution of resources for disease prevention and control. In the current climate, if stigma is associated with having COVID-19, then some people may be reluctant to report symptoms, take a test or input information into a contact-tracing app.

For example, in research we conducted in May we found that one of the initial misconceptions some people had about contact-tracing apps – and one of the reasons they wouldn’t consider using them – was that the app might allow users to specifically identify others (or be identified themselves) as having COVID-19 (though this isn’t actually possible).

One participant said about the app: “It’s like being branded with a horrendous black mark. I could look and be like, ‘my friend, my neighbour has COVID’.” Another participant felt as though “it could cause hate crime as well, finding out ‘oh, you know, I got it from this person’”.

These views reveal implicit assumptions around COVID-19 being something shameful, socially undesirable, and a potential cause of discrimination and social exclusion. And they demonstrate the power of stigma to undermine efforts to control the virus through the government’s track and trace programme.

There is, though, some guidance available on reducing stigma. Past research on other diseases such as pandemic flu and HIV/Aids, as well as advice from organisations like UNICEF and the World Health Organization, offer a number of lessons. Avoiding military metaphors (such as the “war” on COVID-19 and there being COVID-19 “victims”), addressing misinformation surrounding the disease, and not allowing a person’s identity to be defined by having COVID-19 can all have a positive effect.

A copy of their peer reviewed study published in BMJ Open is now available here: