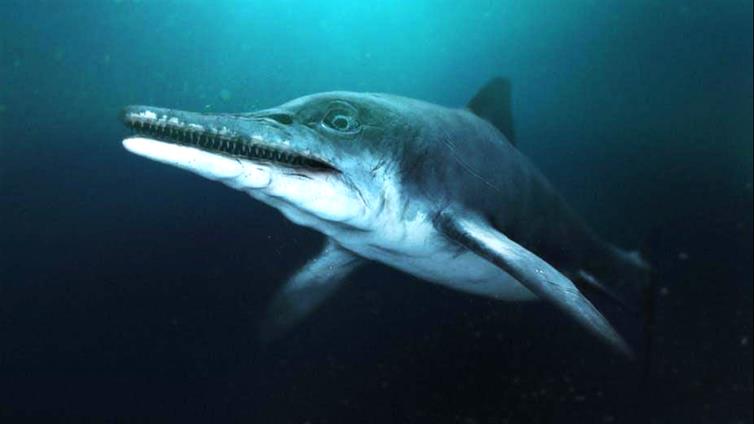 How the fossilised creature may have looked in its heyday. BBC Pictures

Sea Dragon, you ask? It sounds as if David Attenborough has decided to change things up a bit and enter the world of Game of Thrones. But, not quite. Attenborough and the Sea Dragon – to be screened on January 7 – is a new, one-off BBC documentary presented by Sir David Attenborough, which tells the story of a newly discovered ichthyosaur from the Dorset coast, England.

The word “Sea Dragon” refers to two extinct types of reptiles, ichthyosaurs and plesiosaurs. They were first brought to the attention of the scientific world in the early 19th century, and described and named in 1821.

The scientists were well aware that these were not actual dragons, of course, but some people (notably the early collector, Thomas Hawkins), thought the word “dragon” would help to popularise these incredible animals. Their discovery even predates the formal recognition of the word dinosaur, in 1842.

Indeed, these animals are not “swimming dinosaurs”, as they are commonly and mistakenly described as, but are an entirely different group of extinct reptiles that lived at the same time as the dinosaurs. They were a highly successful group that first appeared in the Early Triassic, around 248m years ago, and became extinct about 90m years ago, in the Late Cretaceous.

Most of the early discoveries were found in the UK, having come from the early part of the Jurassic Period, from inland quarries in Somerset and from the coastal section of the Lyme Regis-Charmouth area, Dorset. The inspirational Victorian fossil hunter and palaeontologist, Mary Anning, collected many ichthyosaur specimens from around Lyme Regis and Charmouth, including some of the first brought to the attention of geologists.

Such fossils captivated scientists and the general public, which led to interest from museums and institutions around the globe, eager to add a specimen to their collection. Remains are displayed and stored in museums around the globe. Today, there is still major interest in collecting and studying such specimens. 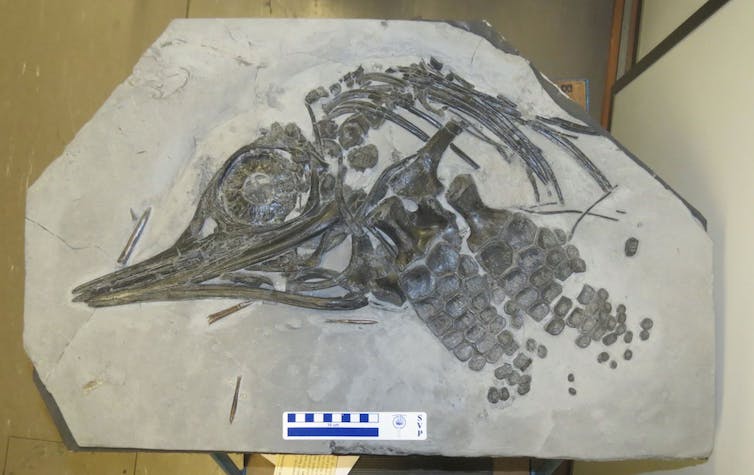 For most of my academic career, which spans just over a decade, I have been studying ichthyosaurs, with a key emphasis on those collected from the Early Jurassic rocks of Britain. Over the years, I have been through countless museum collections across the UK and elsewhere, in hope of examining as many British Early Jurassic ichthyosaurs as possible. In doing so, I’ve seen thousands of specimens, ranging from isolated bones to complete skeletons, and from pregnant individuals to specimens with their last meal preserved. It is hard to quantify the great number of specimens known, but I have probably seen (either physically, or as photos) more than 90% of all British Early Jurassic ichthyosaurs that are stored in museums and university collections.

Each of the new species were based on the (re)discovery of specimens already in museum collections – indeed, palaeontology collections contain a treasure trove of fossils that await rediscovery. But new discoveries straight from the field are particularly exciting – and this is where Attenborough steps in …

In 2016, I was in contact with somebody at the BBC regarding a possible new one-off documentary on ichthyosaurs, presented by Sir David Attenborough. David has a bit of a soft-spot for ichthyosaurs, you see.

Excited probably doesn’t quite capture what I was feeling, given that ichthyosaurs have pretty much been my life for ten or so years and I grew up watching Attenborough documentaries. Anyway, the idea was based around a new ichthyosaur discovery in Dorset. 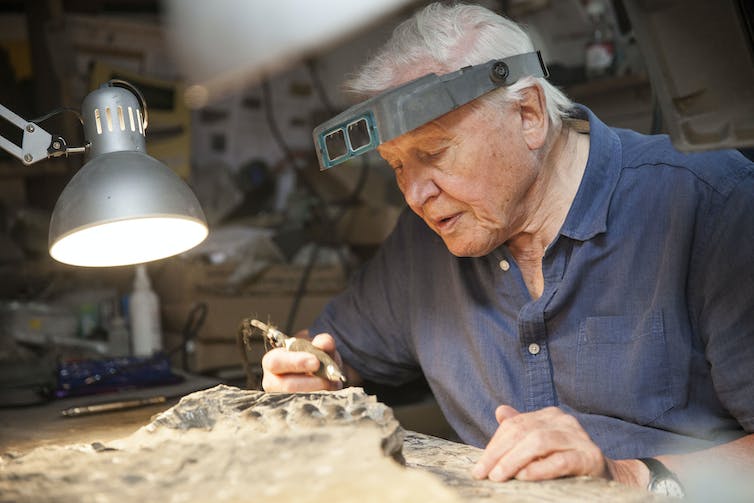 I had actually already been aware of this discovery (in early 2016), as I am long-time friends with the collector, an excellent chap called Chris Moore. I met Chris when I was about 17 years old. He is one of the best fossil collectors I have ever met. He just has a gift when it comes to finding new or rare fossils. For example, one ichthyosaur specimen he found back in January, 1995, turned out to be a new species. It was named Leptonectes moorei, in honour of Chris. He has certainly got an eye for recognising something rare.

The documentary thus focuses on telling the life story of Chris’ 2016 ichthyosaur specimen. From how it lived, what it would have looked like, to ultimately how it died. Several of my colleagues, including Emily Rayfield, Ben Moon, and Fiann Smithwick (all from the University of Bristol) were on hand to help piece together this 200m-year-old puzzle.

Various other colleagues, including Cindy Howells (National Museum of Cardiff) and Steve Etches (The Etches Collection – Museum of Jurassic Marine Life) also helped. The specimen itself is almost complete, although, sadly, is missing the skull. But therein lies the mystery, and part of the story. It is thought that the animal may have been killed from an attack by another ichthyosaur. So, perhaps this is a 200m-year-old crime scene, even what the BBC publicity has called a “murder mystery”?

I have yet to see the documentary, and am looking forward to seeing it. However, I have read, in various press articles, that this specimen has been hailed a new species.

Of course, without a skull, it is difficult to say for certain what species this specimen belongs to, or what really happened to it, and I’m interested to see whether the mystery is finally solved.