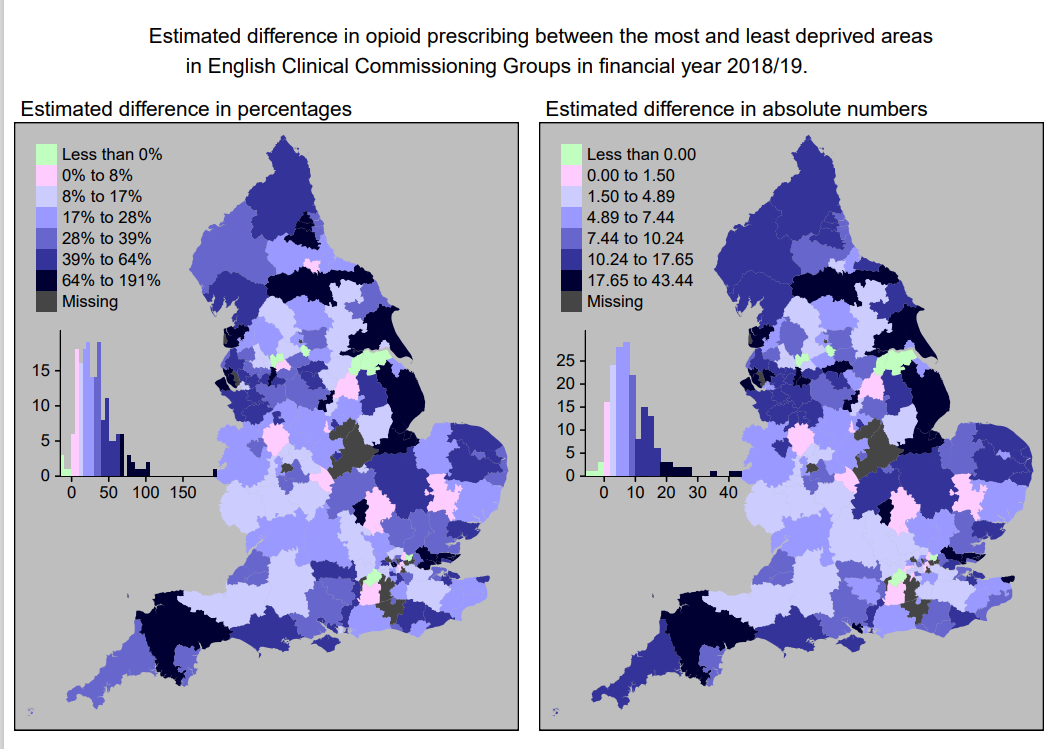 A study by University of Manchester epidemiologists and cofunded by the National Institute for Health Research Greater Manchester Patient Safety Translational Research Centre (NIHR GM PSTRC) is the first to show stark differences in opioid prescribing by GPs in areas just a few miles apart.

The study of English data in the journal Epidemiology and Communality Health, shows how people in our towns and cities divided by deprivation are also divided by opioid use.

Deaths from overdosing and dependency on the class of drugs which include Fentanyl, Morphine, Oxycodone, Tramadol and Codeine have risen dramatically in the West over the past two decades.

Though researchers and policy makers know that prescribing is associated with higher deprivation levels, this is the first time the patterns of this relationship across the country have been fully mapped.

East and South Lincolnshire, Fylde and Wyre, East Riding and the Wirral were the top five CCG areas with the biggest differences in prescribing.

Significant differences in prescribing within CCGs may suggest that policies and interventions at a smaller level, addressing specific communities may be needed.

Much is known about increasing opioid prescribing and opioid-related deaths, but this study adds greater understanding of its association with deprivation

However, say the team, the observed variations in opioid prescribing may reflect wider issues with social, economic and health inequalities which also need to be addressed.

“Much is known about increasing opioid prescribing and opioid-related deaths, but this study adds greater understanding of its association with deprivation”, said Professor Evan Kontopantelis, from The University of Manchester

Magdalena Nowakowska said: “Knowing where exactly which populations are being prescribed more is a powerful way to guide policy responses and interventions so they can allocate resources to areas with highest levels of opioid prescribing.”

“CCG areas have populations of 100,000 to 500,000 people, so these large units can’t really describe the experience of the people who live there.”

“However, the smaller units we used, using some novel methodological approaches and datasets, can give a more accurate picture – which can be incredibly useful for policy makers.”

They modelled the effect of socioeconomic deprivation on opioid prescribing controlling for population demographics and the prevalence of specific health conditions using data from 2018 and 2019.

The Index of multiple deprivation used by the team is recognised as an accurate measure, and uses health, public services, education, crime, and other factors.

She added: “We didn’t look specifically at why there are such stark differences within relatively small geographical areas, people living in more deprived areas are more likely to experience more complex health needs and poorer access to alternatives for opioids are likely to help explain the disparities.

The study was funded by the NIHR School for Primary Care Research and the NIHR Greater Manchester Patient Safety Translational Research Centre.

The paper Association of Socioeconomic Deprivation with Opioid Prescribing in Primary Care in England: a Spatial Analysis is published in Epidemiology and Communality Health,