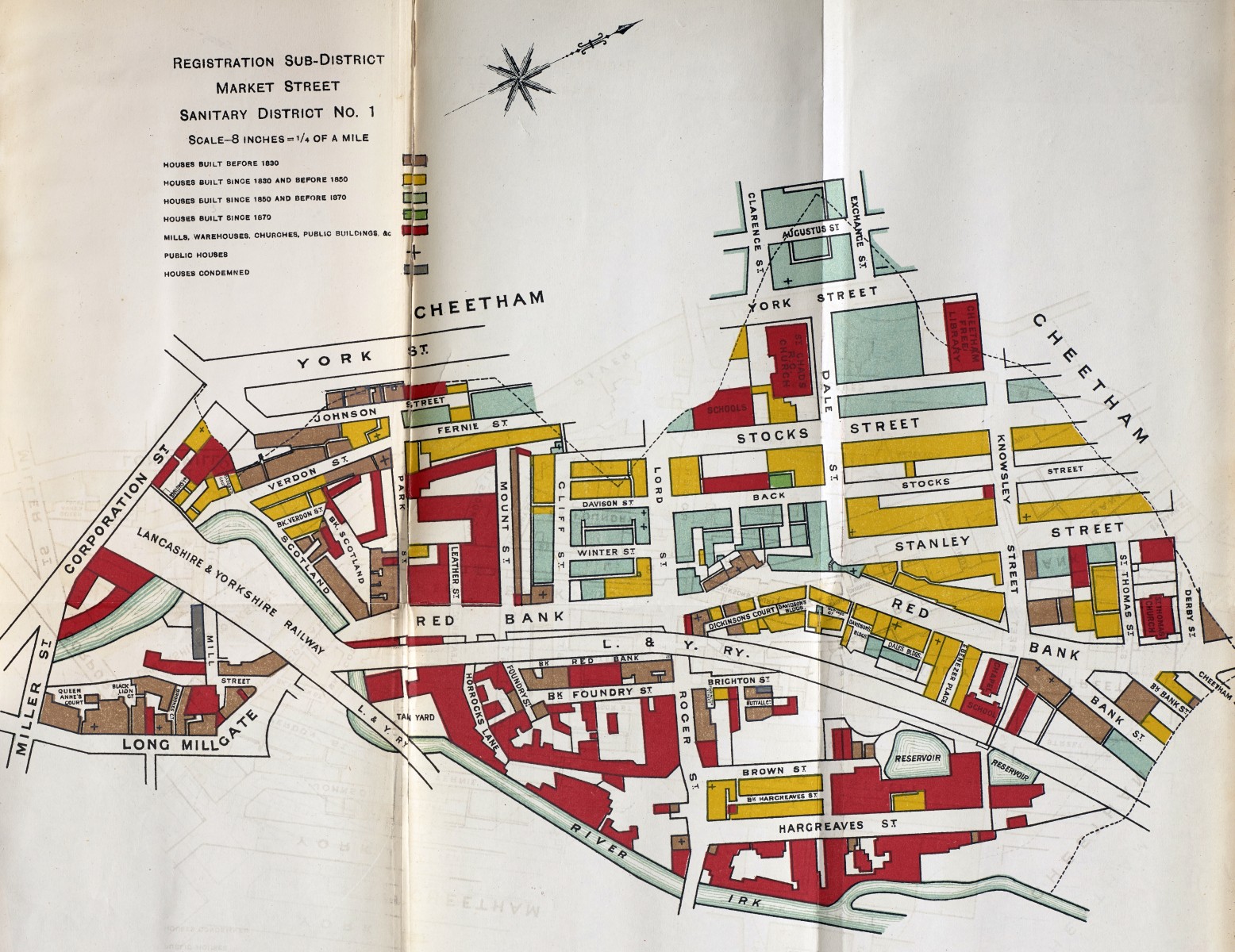 Forgotten maps of Manchester slums restored and available to view

A new project has repaired, photographed and shared online forgotten maps of Manchester’s slums, which had been overlooked for the last 130 years.

The maps from the early 1880s provide information on the age of dwellings and the use of other buildings, and help us to visualise the dense physical layout of some of the city’s most notorious slums such as Red Bank, which was described by Friedrich Engels as “utterly uninhabitable” when he wrote about Manchester in the 1840s.

The maps had been overlooked by historians, urban geographers and other scholars for the last 130 years, as they were bound into reports by the city’s Medical Officer of Health who used his influence to improve the physical living conditions and wellbeing of Manchester’s citizens.

The reports were not widely distributed and the maps were printed on lightweight paper, folded in as inserts – consequently, many of the maps were in a fragile state.

Geographer Dr Martin Dodge worked with experts from the University of Manchester Library to carefully conserve, photograph and digitise the maps, as part of a wider project to make little-known maps and plans of Manchester publicly available.“I first stumbled over a handful of the maps when researching for an exhibition on the history of Manchester,” said Dr Dodge. “They were intriguing visually, but hard to make sense of as they had been separated from their source.

"I found that the set of more than 30 maps were published in volumes of important but now quite rare Medical Officer of Health reports written by John Leigh. A set of these reports, luckily, is held in the Manchester Medical Collection in the University Library archives.”

The maps provide detail of the city centre area in a key period of change towards the end of the 19th century. While there are many available maps showing streets, there are few sources for land use - and in particular, the age of buildings and the quality of housing. The restored maps fill a gap between the survey in 1850s published by Joseph Adshead, and the 1904 map of housing condition in Manchester and Salford by campaigner Thomas R. Marr. In some respects, they are comparable to Charles Booth's London poverty mapping in the 1890s.

Reports containing the maps have also been digitised, providing grim and detailed statistical accounts of the mortality experienced in Victorian Manchester. The cause of death, occupation, age and sex is recorded for individuals in each sanitary district, along with their address and the date of death.

“The maps were printed on poor quality paper, which had been folded and bound into reports as inserts,” said Special Collections Librarian Donna Sherman. “Over time, the paper had become brittle and would tear and deteriorate along the creases when consulted. Our map conservator repaired the fragile maps, which were then carefully photographed by our expert photographers. Our Imaging Services team then uploaded the digitised maps to our online map collection.”

The maps are a unique sanitary survey for Manchester, which will be a valuable resource for researchers to better understand the social conditions in the city in the late 1800s.

The maps can be viewed at https://luna.manchester.ac.uk/luna/servlet/s/i44gh4. 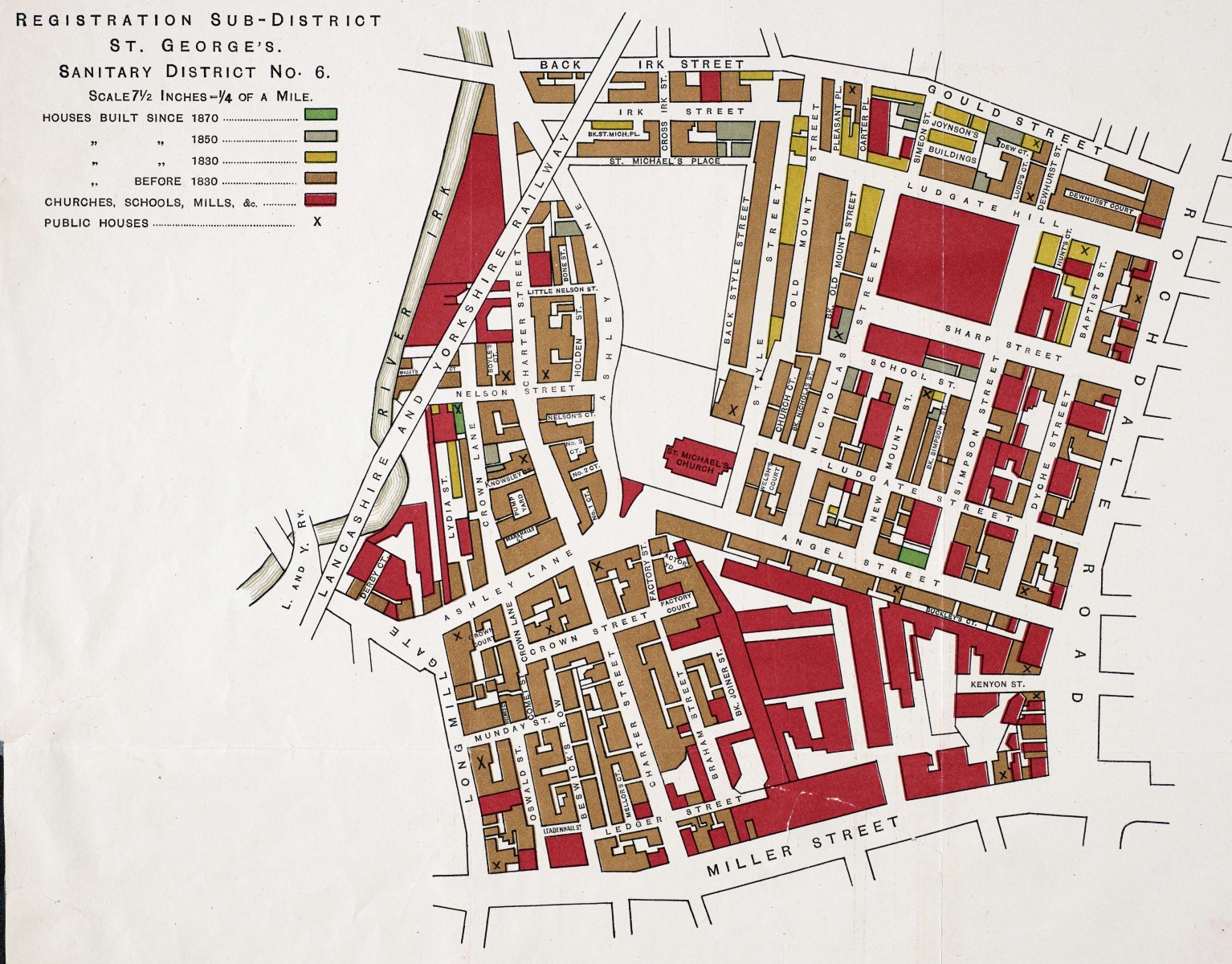 Forgotten maps of Manchester slums restored and available to view