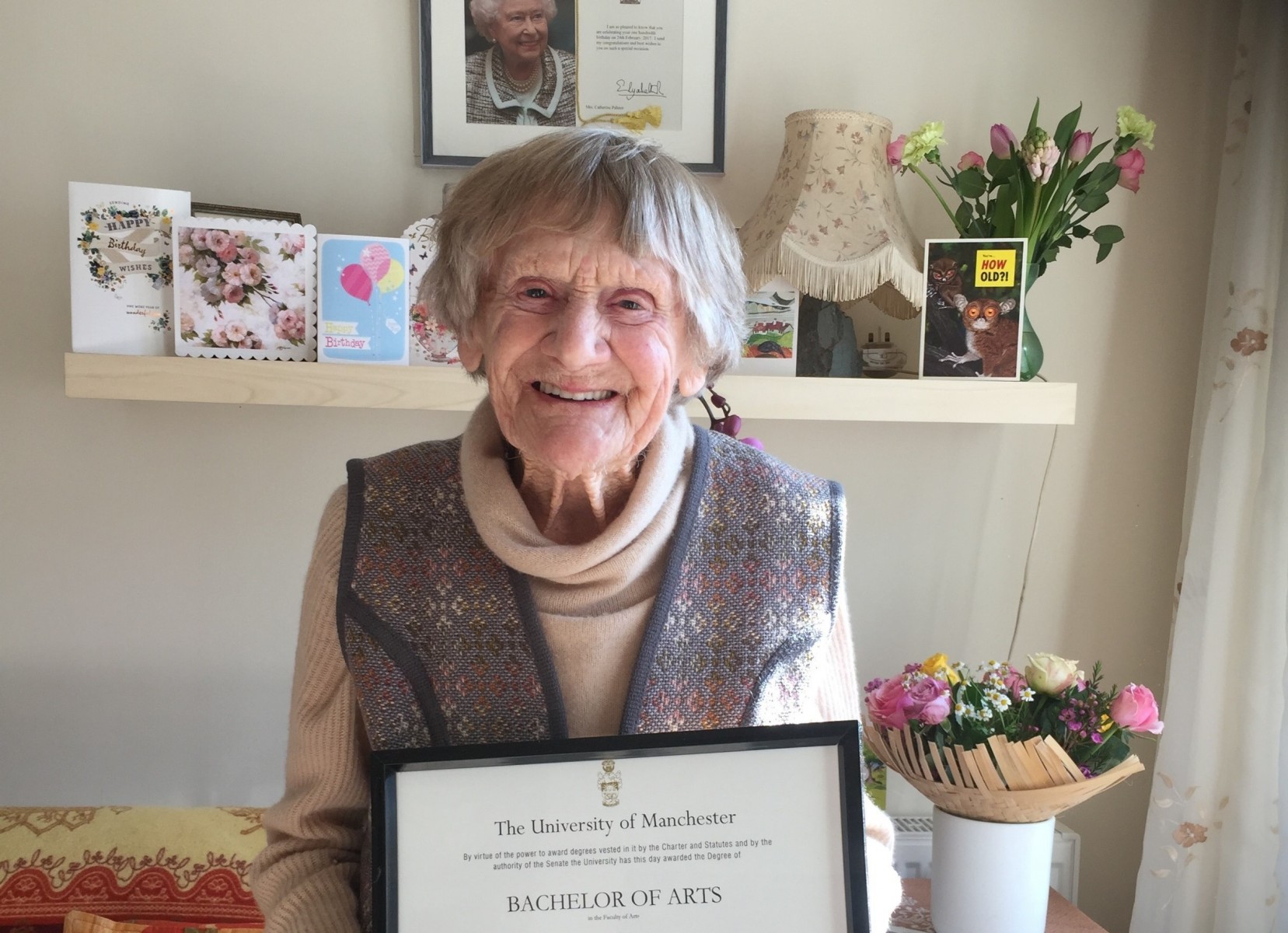 A centenarian who completed her university degree in 1938 has finally received her certificate, after her daughter surprised her with it at her 101st birthday party.

Catherine Palmer (née Bolton) was born in Southport in 1917. She came to Victoria University of Manchester in 1935 to study English, and lived in Ashburne Hall in Fallowfield where she had a private room with a balcony.

She was a very active student, and during her time at Manchester she sang in the choir, represented the university at fencing and athletics, and also enjoyed climbing in the Lake District – an activity which she continued to enjoy later in life.

She achieved a first class degree, and although she attended her graduation ceremony, she didn’t receive a certificate at the time - she moved to Glasgow soon afterwards, and then went on wartime placements at St Thomas's and St Marys hospitals in London.

After the war had concluded, Catherine began teaching English - firstly at the NW Polytechnic in London (now the University of North London), and then in grammar schools. Her students in London came from around the world, and she often invited them to live in her family home while studying – which was frowned upon by some of her neighbours at the time.

She was proud that one of the international students who lived with her went on to be the president of the University of Bristol student union, and then became a government minister in St Lucia.

She had a long and accomplished teaching career, and also had three children - who have now been followed by five grandchildren and three great-grandchildren. She has continued to be very active in later life, even embarking on a trekking and white water rafting adventure in the Himalayas at the age of 75! She still walks her dog every day, and is able to live an independent life.

“We had a great birthday with Mum, and she was delighted to finally get her certificate, which has now taken pride of place next to her card from the queen,” said Alison, her daughter who arranged the surprise for her. “I had so often heard her talk about her days at university as special and very happy times, and then she'd mention the lack of evidence of her achievements there.”

“It felt important to try to give her the acknowledgment of those days, and contacting staff at Manchester has enabled a sense of completion and celebration to finally happen!”

I am delighted that Catherine has finally received her degree certificate. In this centenary year for women’s suffrage, it is important to celebrate the achievements of our alumni, and Catherine’s life and work are an inspiration to our current students.