Published in Science, a collaboration between teams from the National Graphene Institute (NGI) at The University of Manchester, and the École Normale Supérieure (ENS), Paris, demonstrated the Hebbian learning in artificial nanochannels, where the channels showed short and long term memory. Hebbian learning is a technical term introduced in 1949 by Donald Hebb, describing the process of learning by repetitively doing an action.

Hebbian learning is a well-known learning mechanism, it is the process when we ‘get used’ to doing an action. Similar to what occurs in neural networks, the researchers were able to show the existence of memory in two-dimensional channels which are similar to atomic-scale tunnels with heights varying from several nanometers down to angstroms (10-10 m). This was done using simple salts (including table salt) dissolved in water flowing through nanochannels and by the application of voltage (< 1 V) scans/pulses.

The study spotlights the importance of the recent development of ultrathin nanochannels. Two types of nanochannels were used in this study. The ‘pristine channels’ were from the Manchester team led by Prof. Radha Boya, which are obtained by the assembly of 2D layers of MoS2. These channels have little surface charge and are atomically smooth. Prof. Lyderic Bocquet’s group at ENS developed the ‘activated channels’, these have high surface charge and are obtained by electron beam etching of graphite.

An important difference between solid-state and biological memories is that the former works by electrons, while the latter have ionic flows central to their functioning. While solid-state silicon or metal oxide based ‘memory devices’ that can ‘learn’ have long been developed, this is an important first demonstration of ‘learning’ by simple ionic solutions and low voltages. “The memory effects in nanochannels could have future use in developing nanofluidic computers, logic circuits, and in mimicking biological neuron synapses with artificial nanochannels”, said co-lead author Prof. Lyderic Bocquet. 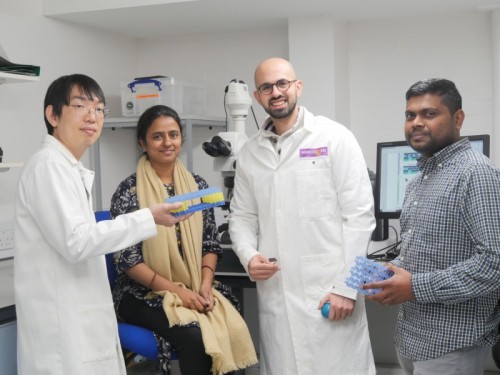 Co-lead author Prof. Radha Boya, added that “the nanochannels were able to memorise the previous voltage applied to them and their conductance depends on their history of the voltage application.” This means the previous voltage history can increase (potentiate in terms of synaptic activity) or decrease (depress) the conduction of the nanochannel. Dr Abdulghani Ismail from the National Graphene Institute and co-first author of the research said, “We were able to show two types of memory effects behind which there are two different mechanisms. The existence of each memory type would depend on the experimental conditions (channel type, salt type, salt concentration, etc.).”

Paul Robin from ENS and co-first author of the paper added, “the mechanism behind memory in ‘pristine MoS2 channels’ is the transformation of non-conductive ion couples to a conductive ion polyelectrolyte, whereas for ‘activated channels’ the adsorption/desorption of cations (the positive ions of the salt) on the channel’s wall led to the memory effect.”

Dr Theo Emmerich from ENS and co-first author of the article also commented, “our nanofluidic memristor is more similar to the biological memory when compared to the solid-state memristors”. This discovery could have futuristic applications, from low-power nanofluidic computers to neuromorphic applications.

Advanced materials is one of The University of Manchester’s research beacons - examples of pioneering discoveries, interdisciplinary collaboration and cross-sector partnerships tackling some of the planet's biggest questions. #ResearchBeacons