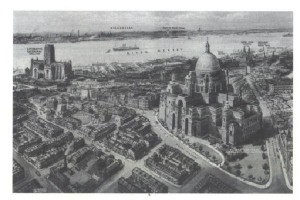 The hardships of the Great Depression spurred a period of unparalleled creativity according to a University of Manchester historian.

Dr Charlie Wildman says the modern high street and great architecture are a lasting legacy of one of the most traumatic times in British economic history.

According to her study of archives in Liverpool and Manchester from the 1920s and 30s, councils invested massively in public transport, civic and commercial architecture as well civic exhibitions and official celebrations.

If history repeats itself, the findings may provide a crumb of comfort for people enduring current economic woes.

Iconic landmarks such as Manchester Central Library, Manchester Town hall extension, the Mersey Tunnel and the Liverpool Philharmonic Hall were all built during the early 1930s.

“Without doubt, the Great Depression caused huge hardship for millions of people - but that was not the whole story,” she said.

“Many retail businesses moved from the suburbs to central locations. They adopted creative ideas to attract more customers who could shop at lower prices.

“This had a lasting legacy though the creation of the modern high street and what we recognise today as shopping culture.

”The jury’s out on whether the similar levels of creativity will result from today’s economic crisis – but I don’t see why not.”

According to Dr Wildman’s research, department stores used innovative ideas to attract shoppers. Examples include a zoo at George Henry Lees and an appearance as a shop assistant by Gracie Fields at Bon Marche, both in Liverpool.

An ambitious Liverpudlian archbishop called Richard Downing raised £1 million - a huge sum in those days – to build the largest Cathedral outside Rome.

The building - never completed - was designed by renowned architect Edwin Lutyens and would have been twice the size of the city’s Anglican Cathedral.

And Trafford Park in Manchester - one of the oldest industrial estates in the world - was revitalised during the Depression.

Also according to Dr Wildman’s research, the innovations were a pragmatic response by politicians, businessmen, and church leaders to the threat of extremist politics.

She added: “You could say this period of civic investment was a form of opium for the masses.

“Britain did not follow the experience of countries such as Spain, France and Germany: Communists and fascists were visible but in reality pretty marginal.”

Examples of innovations during the Great Depression:

Excerpts from her PhD thesis Spectacular Urban Culture in the Age of Decline: Liverpool and Manchester, 1918 – 1939 are  available.

Dr Wildman is available for interview