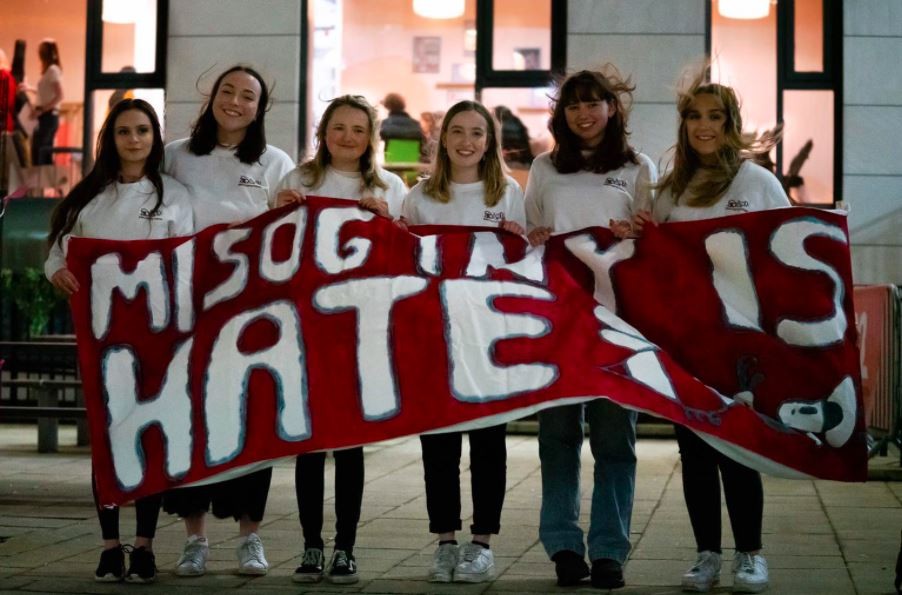 Two graduates from The University of Manchester who have been campaigning for nearly three years have been celebrating this week, as the Government announced it will ask the police to record crimes motivated by a person's sex or gender.

On Wednesday, Home office minister Baroness Williams declared that all police forces in England and Wales will be asked to record crimes caused by hostility based on sex or gender from autumn onwards. This change is taking place whilst the Government await the outcomes of the Law Commissions review of hate crime legislation.

For longstanding campaigners Jess Bostock and Sylvie Pope this is a major step forward, bringing them closer to their goal of ensuring misogyny is classed as a hate crime, to help tackle male violence against women.

Sylvie Pope started the campaign to make misogyny a hate crime as leader of Greater Manchester Citizens Women’s Action Group back in 2018, while still a Social Sciences student at The University of Manchester. Having experienced unwanted sexual advances and everyday sexism herself, she was inspired to take action after hearing about Nottingham Citizens, who had successfully campaigned to see Nottinghamshire police become the first police force in the UK to record misogyny as a hate crime.

Led by Sylvie and Geography student Jess Bostock, campaigners brought together women from across communities in Greater Manchester to form an alliance as part of Greater Manchester Citizens, and launched the Misogyny IS Hate campaign. Since forming, the team have campaigned relentlessly, running a series of action events, conducting research into misogyny in Greater Manchester, meeting with decision makers and sharing experiences of harassment, violence and hate.

In 2020, following consultations, the campaign gained the backing of Greater Manchester Mayor Andy Burnham, who has recorded misogyny hate crime as a key policy in the ‘The Greater Manchester Strategy to Tackle Violence Against Women and Girls’.

The University has played a key supporting role from the beginning of the campaign, with the Department of Geography supporting Jess Bostock in her research study on misogyny in Greater Manchester and the Students’ Union hosting a series of events, running campaigns and organising workshops on consent and sexual violence for students. The department for Social Sciences supported Sylvie to conduct original research into misogyny hate crime across the UK for her final year dissertation, which formed part of the recent Lords briefing in Parliament.

In 2020, the SU’s Reclaim the Night, an annual movement against sexual harassment and gender-based violence, named the campaign as one of its key policies, leading to over 2000 women marching the streets.

The University of Manchester’s students have always had a reputation for campaigning about issues regarding social justice. This is a remarkable achievement, and the University is very proud.

Jess Bostock noted “We are absolutely thrilled that women have been listened to, and that misogynistic crimes will be recorded. Women from GM and The University of Manchester have been campaigning around these issues for years.

“Recording misogynistic hate crimes is a simple, yet necessary, step to better understand and map women’s experiences and ultimately to tackle misogyny and male violence against women. By mapping every woman's story or report of a hate incident, we can pre-empt patterns of abuse and redistribute funding to vital community services.

“Tackling misogyny requires community-led solutions - recording where men are committing violence against women is just the start and there is so much more to be done.”

"I chose to study in Manchester because it was the Suffragette City," said Sylvie Pope. "At the beginning of this campaign, I sat in a boardroom across from Mayor Andy Burnham and told him my story of misogyny. I'm incredibly proud of the hundreds of women who have since joined our campaign across Manchester and bravely told their stories. It's a relief to hear that we've finally been listened to, and that this law change will impact millions of women and girls in our city as well as across the country."