HCRI alumna among Uganda’s Top 40 Under 40

Sarah Lagot Odwong, a Humanitarianism and Conflict Response MA graduate has been included in Uganda’s Sunday Vision Top 40 Under 40. 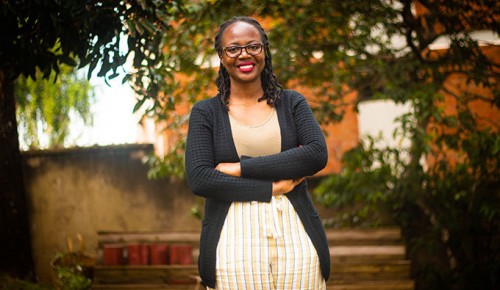 The list recognises outstanding managers/leaders who act as a beacon to their peers and whose work has led to positive impact for their communities.

The nomination is largely based on Sarah’s work through her role as a Communications Director for USAID’s Better Outcomes for Children and Youth (BOCY) project. The project delivers HIV and social protection services to families and children across districts in northern and eastern Uganda.

When asked to provide comment on her role, Sarah revealed that her work is driven by passion, resilience, compassion and a heart for humanity.

“I am part of a team strengthening family resilience and closing the gaps in prevention and response to violence, HIV, and other vulnerabilities for over 27,000 families, and over 100,000 children and youth across 22 districts in Uganda,” she said. “The gist of my work is championing the transitioning of communities from disease affliction, poverty, inequality and suffering to a dynamic individual and community growth.

“I am encouraged daily to put in the work - even on days when it is rough and seems thankless because what I do gives me fulfilment. Purpose for me is reflected in the eyes of the little boy who is in better health and has gone back to school because he learned to adhere to his Anti-Retroviral Treatment. It is in the smile of the young teenage mother who has learned a new trade to eke a living for herself and her young baby. It is in the palpable relief of the caregiver who has been accorded financial support with education subsidies to send the orphans under her care back to school. It is in the victorious roar of council officials who have managed to convince the local government to pass ordinances to close down spaces like stone quarries, brothels and others that make children and young people susceptible to exploitation. Sometimes, it doesn’t feel like it, but there are times when I step back and realise my work is creating a noticeable impact. And that makes all the difference.”

When reflecting upon her nomination Sarah noted: “It is extremely humbling to be spotlighted among such a distinguished cohort of young Ugandans creating transformational change in Africa and beyond. Whereas the recognition is unexpected, it has fuelled my drive to continue to serve those most in need. More importantly, it has been opportune for representation. The little girls in Northern Uganda, who have moved back from internally displaced people’s camps to their ancestral villages to rebuild their lives after two decades of the Lord’s Resistance Army civil war, will see a real-life testimony that you can succeed even amidst adversity. I am one of them. If I can achieve certain things, they can certainly do the same.”