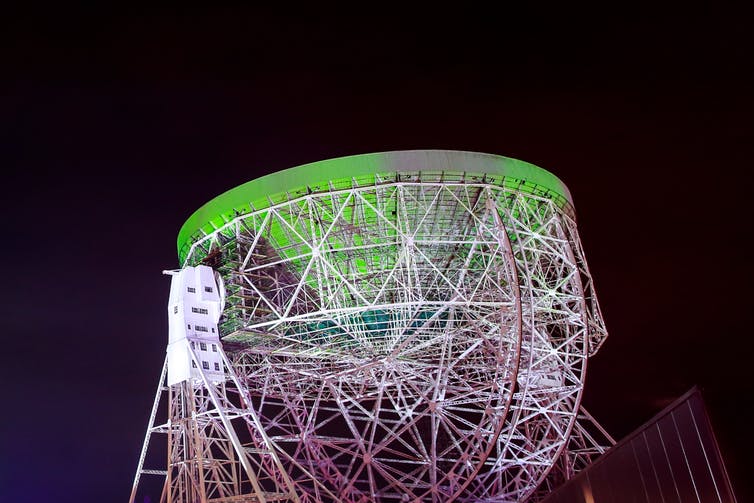 As a scientist, I was recently involved in bringing my work to the big screen. This was not a Hollywood sci-fi blockbuster but “big screen” in the literal sense: an art production about science that used the Lovell radio telescope, a 3,200-ton steel behemoth supporting of a 76-metre wide dish, to generate and show audio-visual art that drew on scientific data.

I have been involved with numerous public engagement opportunities over the years: giving public lectures, visiting students in schools, interacting on social media, being interviewed about new discoveries. There is however another form of public engagement that I have come to experience in the past year, which I would probably never have considered if not for the fact that it came knocking at my door: connecting with an artist developing a piece inspired by the scientific work that my colleagues and I do.

This is quite a contrast for astronomers working at the Jodrell Bank Observatory, given that a lot of our focus is normally devoted to activities such as connecting our telescope to various networks of radio dishes in order to produce ultra-sharp images of the sky or monitoring the clockwork rotation of rapidly spinning, ultra-dense exploded stellar leftovers known as pulsars. In a way though, it is perhaps not unexpected that sooner or later someone would draw inspiration from the rich history of astronomical breakthroughs accomplished using the telescope.

It pretty much started with an email – the modern door knock – from my colleague Tim O'Brien asking if I would discuss my research with an artist who had been commissioned to create an art experience which would be projected onto the Lovell radio telescope as part of the bluedot festival at the observatory. My immediate answer was yes; who would turn down the opportunity to see their work projected on a structure the area of 20 standard IMAX screens?

The original feeling that drove me to get involved is the same that pushes me to get up every morning to study our universe: curiosity. The unsettling difference is that with the art project it feels like I am the one under scrutiny. I am not the subject – my data is – but there is this a strange relationship that I develop with data over time. A kind of intimacy.

After all, I may spend anywhere between a couple of months to, in some cases, multiple years, working on the same set of data: processing, analysis, modelling them, and then redoing it all over. So if someone is interested in my research in order to produce art, I have an immense trepidation to discover what the artist will do with my data.

Hidden in Plain Sight by Addie Wagenknecht on the Lovell telescope, commissioned by Abandon Normal Devices.

Astrophysics, like many other branches of science, lies at the cutting edge of what is called big data. We collect huge amount of data and the relevant information manifests itself as a very subtle signal buried in it. In my case my science focuses on pulsars, which illuminate the sky like (extremely faint) cosmic lighthouses. In that sense, Hidden in Plain Sight, by artist Addie Wagenknecht, is the perfect epitome of our day-to-day research challenges.

The artwork sits at the crossroad with science as Wagenknecht uses machine learning – using artificial intelligence to try and classify and interpret data on its own – in order to turn our data into art. The visual style could be described as a mosaic of irregular polygons that resembles modern dazzle camouflage. While it initially gave an impression of randomness, it gradually evolved into a more ordered rhythm of patterns varying in sized, shape and intensity.

Additionally we collaborated with Simon Jackson, an acoustic designer at engineering firm Arup to produce an immersive three-dimensional soundscape. The composition was informed and generated from data sets we shared. It rendered feelings of distance/proximity through direction of sound travel and variations in brightness/colours with frequency modulations.

Together, the sound and images translated the complexity and anomalies that signals gather on the journey to us. 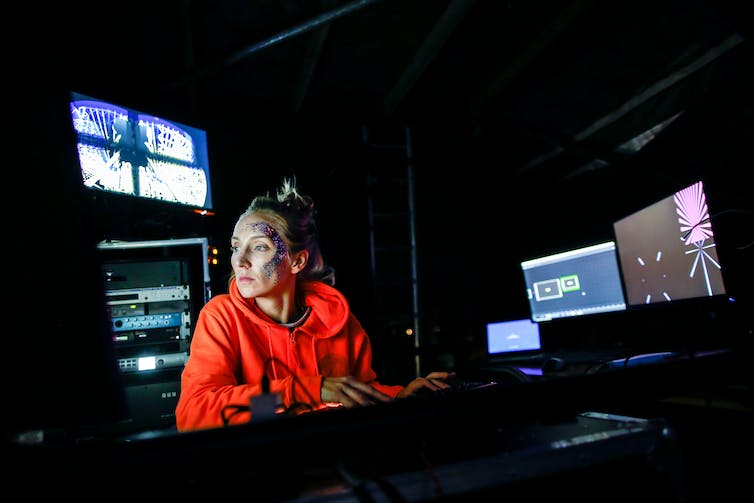 The fascinating discovery that I’ve made working with artists is that they don’t directly try to communicate my results like I would normally do in other engagement activities. Instead, the process is a more involved experience in which they attempt to extract the essence of the research in order to turn it into an audiovisual emotion.

In 2017 I collaborated with Tokyo-based artist Daito Manabe, who focused his attention on sourcing live data from the Lovell telescope in order to turn the cosmic whispers it detected into sound and images. This was an interesting twist as the telescope acted both as projection medium and art material. The process involved in feeding data to the art installation closely followed the same steps employed to produce science, with the major difference arising in way the numbers are interpreted. 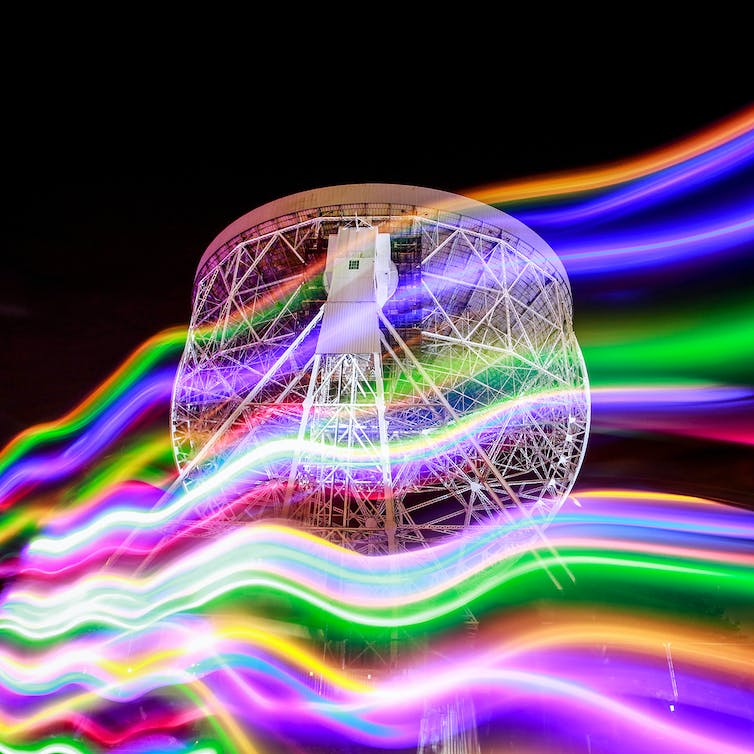 Imprint of lights passing in front of the telescope. Chris Foster, Author provided

The amazing aspect of being part of these projects is that the two artists I have worked with so far did not only soak up as much of science knowledge as they could, but they were also primarily interested in understanding the actual data that I work with at various stages of the research process. They ended up using the data directly as a way of performing their art.

The science vs art dialogue is a modest contribution on my part, but somehow, I cannot help and reflect on the interaction between former Jodrell Bank director, Sir Bernard Lovell, and engineering prodigy Sir Charles Husband, which led to the master piece – both scientifically and artistically – now named after the former: the Lovell telescope.