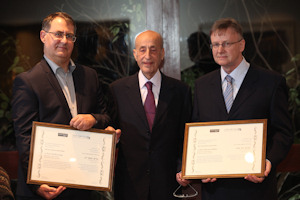 Exactly 100 years after the first President of Israel, Chaim Weizmann, made his vital discovery about acetone at The University of Manchester, the institution is celebrating his legacy through new scientific discoveries made in collaboration with the Weizmann Institute of Science in Israel thanks to the generosity of Lord Alliance.

In 1915, in the university’s Bio-Chemistry labs, Weizmann discovered a more sustainable way of making acetone which was required for the manufacture of the explosive powder cordite. His work attracted the attention of the British Government and eventually six distilleries were requisitioned for the mass production of cordite. As a result, shell production rose from 500,000 in the first five months of the First World War to 16.4 million in 1915, demonstrating the significant impact Weizmann had on the war effort.

Today, the scientific link between The University of Manchester and the Weizmann Institute of Science in Israel is stronger than ever with eight current partnerships in the area of Life Sciences which are yielding significant research. Funding is also now in place for seven further partnerships thanks to the generous support of the Alliance Family Foundation.

The fact that one of the UK’s top universities is working in partnership with one of Israel’s pioneering scientific institutes is significant according to Britain’s Ambassador to Israel Matthew Gould.

He says: “The partnership being built between Weizmann and Manchester is about the past, the present and the future. It is about the past, because it is only right to strengthen the link between the institute that bears Chaim Weizmann's name and the university where he worked. It is about the present, because such collaboration is the best answer to those calling for boycotts of Israel and the future because I can think of no better model for relations between Israel and Britain than our world-leading scientists working together for the benefit of humanity.”

On 24 March a two day symposium was held at the Weizmann Institute, celebrating the scientific discoveries already made through the Lord Alliance Get Connected Grants and encouraging additional partnerships.

During this symposium the Lord Alliance Prize of £100,000 was awarded to one of the current partnerships, that of Professors Werner Muller (UoM) and Steffen Jung (WIS). Their work has shed light on how the cells in our gut respond to foreign parasites like worms and how these cells may trigger diseases such as Inflammatory Bowel Disease (IBD). Some of the other scientific discoveries that have been made possible through the Lord Alliance Get Connected grants impact on neural conditions such as Alzheimer’s disease, food security, wound healing and cancer.

Lord Alliance says: “The University of Manchester and the Weizmann Institute are both so close to my heart. To have the opportunity to bring the very best scientists together and see where their collaboration can lead has been a wonderful opportunity. I am truly delighted to see the results the Get Connected programme has had so far and am very much looking forward to more far-reaching scientific partnerships being created at the Symposium in Israel.”

Professor Martin Humphries, Dean of the Faculty of Life Sciences helped establish the connections between Manchester and the Weizmann Institute:

“Both the University of Manchester and the Weizmann Institute of Science have an esteemed heritage, exemplified by many highly impactful contributions to knowledge. Both our heritages interact at multiple points, but none more significant than the work of Chaim Weizmann while he was in Manchester. In establishing the concept of the Get Connected scheme, Benny Geiger and I aimed to build on this historical link and provide a means for the excellent scientists in both institutions to forge new interactions. The Get Connected programme is a shining example of what can be achieved when such researchers are given the freedom and resources to join forces with other like-minded teams. Put simply, what is achieved is progress at an accelerated rate.”

Professor Benny Geiger, Dean of the Faculty of Biology at the Weizmann Institute of Science adds:

“The extraordinary increase in the complexity and diversity of modern science, leads to an increasing need for multi-disciplinary teamwork based on scientific collaboration between those with complementary expertise. The Manchester-Weizmann Get Connected programme is an excellent example of a goal-oriented and synergy-driven collaboration, carried out in a highly friendly and warm atmosphere. On top of these considerations there is also the historical element of the partnerships manifested in the vision of Chaim Weizmann. One of his statements referred specifically to the role of science in shaping the future of the state of Israel, and is still very relevant today: “I feel sure that science will bring to this land both peace and a renewal of its youth, creating here the springs of a new spiritual and material life… I speak of science for its own sake and applied science.”

A copy of the original appointment letter from The Victoria University of Manchester to Chaim Weizmann dated 1905 is available. Images from the symposium are available as well as a video illustrating the work of the Lord Alliance prize winners.

Attendants at the symposium included Lord Alliance, the British Ambassador to Israel, current Get Connected researchers as well as those hoping to be awarded funding for new partnerships. The theme for further partnerships was developmental biology and regenerative medicine.