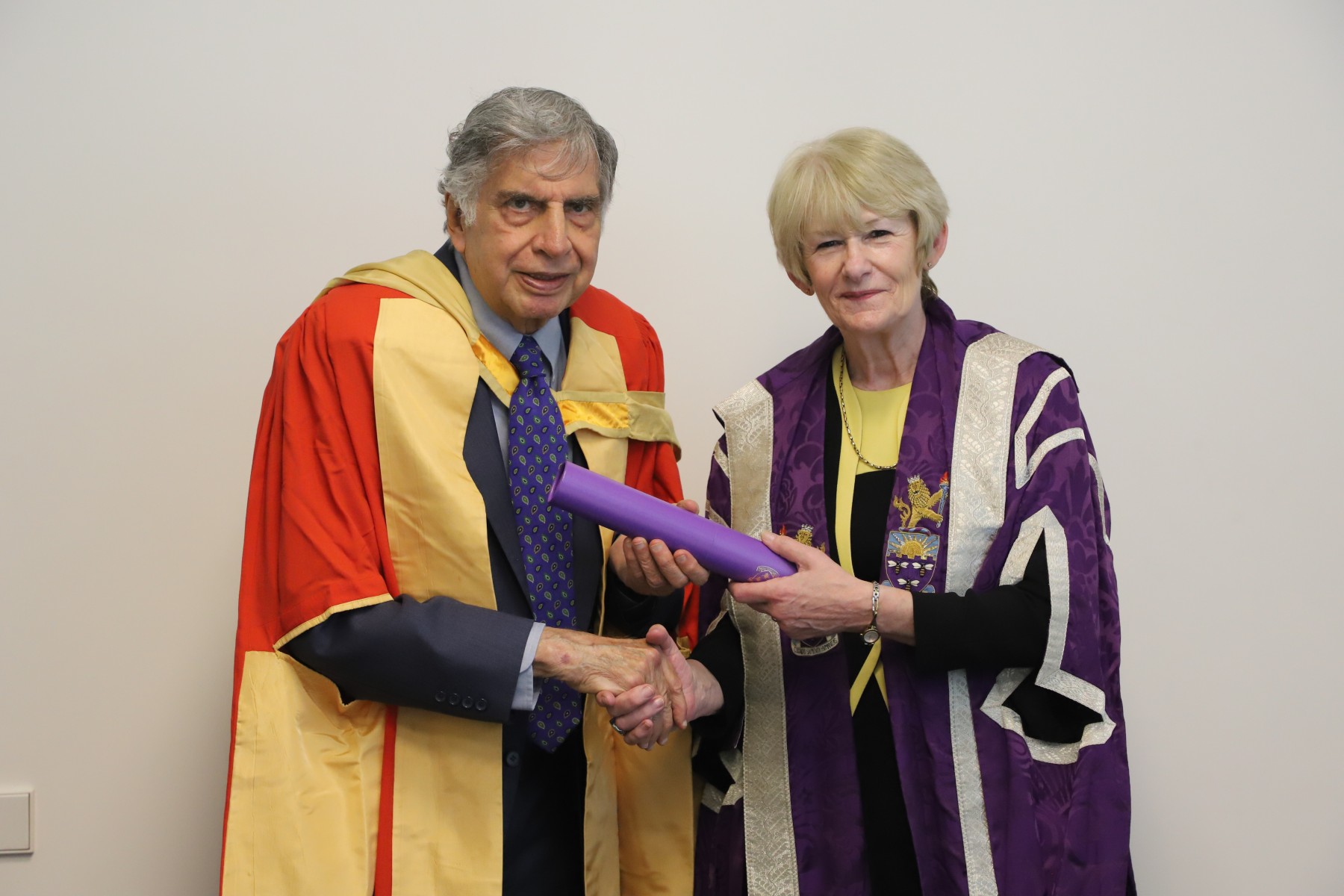 Honorary doctorate for one of India’s most famous philanthropists

The University of Manchester has awarded an Honorary Degree of Enterprise to Ratan Tata, one of India’s most famous and successful industrialists and philanthropists.

The award took place at a special ceremony in Mumbai, led by the University’s President and Vice Chancellor, Professor Dame Nancy Rothwell. Professor Rothwell is visiting the country to strengthen research and industry links between India and the University.

Ratan Tata is Chairman Emeritus of Tata Sons – the holding company of the Tata group. The group is one of India’s best known and trusted organisations for over 150 years. Under Ratan’s leadership, from 1991 to 2012, it also became a global name and is now one of the largest conglomerates in the world. Tata became a world-wide name with the acquisition of major international brands such as Tetley, Daewoo, Corus, Jaguar and Land Rover.

Ratan has equally made a deep impact in philanthropy through the Tata Trusts, which he chairs. Under his guidance, the different Trusts, set up over time by Tata family members since 1892, have come together as a unified operating entity to target their talent and resources to pursue important causes that are good for India. Some of the most important causes Ratan has championed are nutrition, sanitation, cancer care, rural poverty alleviation, and social entrepreneurship.

It is this sense of social responsibility and philanthropy that links Ratan to The University of Manchester as the University also shares these values. Social Responsibility is one of Manchester’s three core strategic goals sitting equally alongside our commitments to world-class research, and outstanding learning and student experience.

Ratan is inspirational. For him, philanthropy and innovation are spokes of the same wheel, each leading towards the improvement of lives which is the very same ethos we share at The University of Manchester.

“He is an example to big business, small enterprise, to researchers and developers, those who give and those who can give more. We believe that he will be an example to our students as they grow to become global citizens.”

During her visit, Professor Rothwell will also meet another prominent Indian business leader and billionaire, Mukesh Ambani. According to Forbes magazine, Ambani is the richest man in Asia and the 10th richest person in the world.

He is the Chairman, Managing Director, and the largest shareholder of Reliance Industries Ltd. (RIL), India's most valuable company. RIL is engaged in energy, petrochemicals, textiles, natural resources, retail, and telecommunications and it ranks 106th on the Fortune Global 500 list of the world's biggest corporations as of 2019.

Honorary doctorate for one of India’s most famous philanthropists