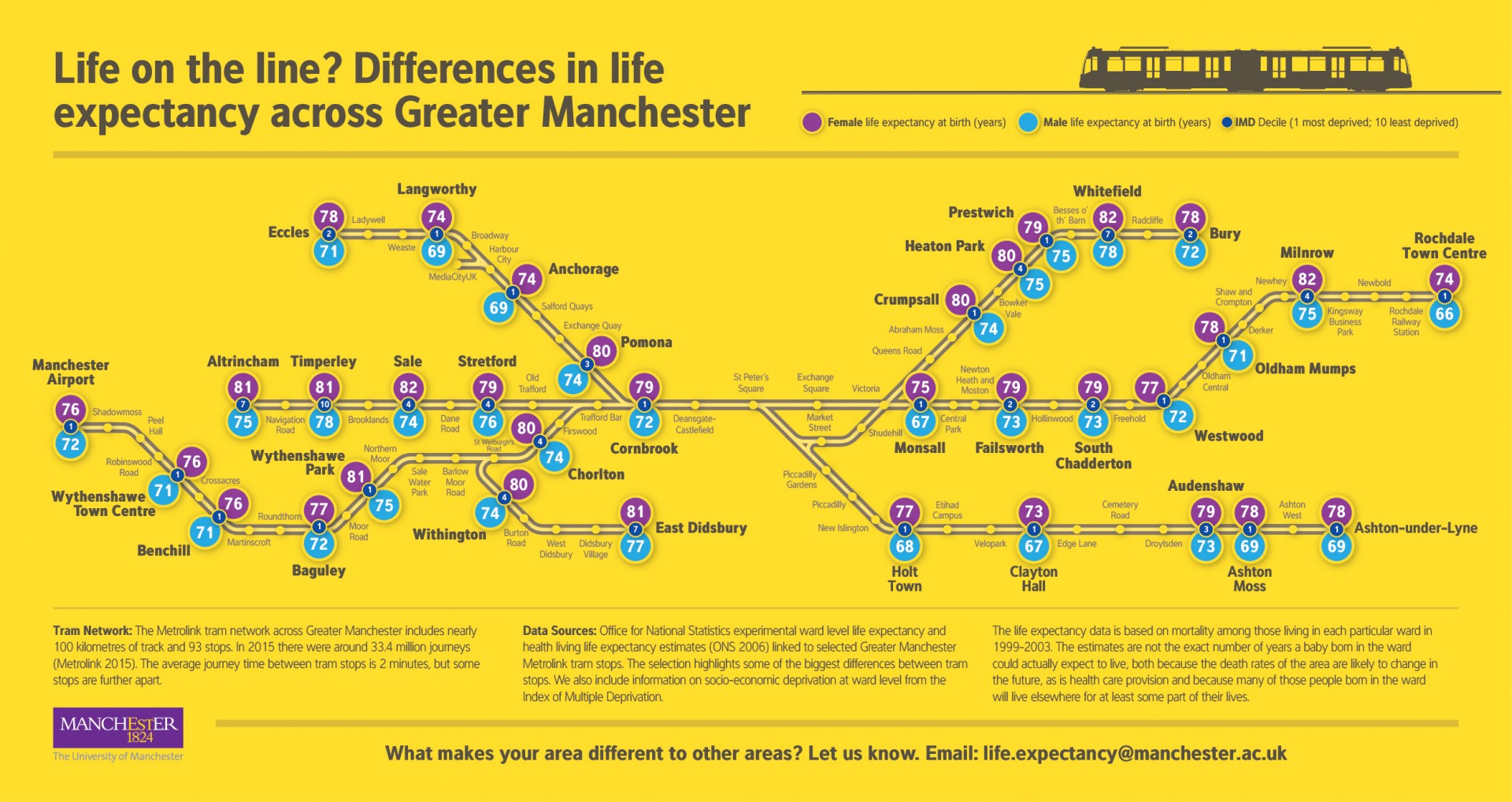 An academic from The University of Manchester has created a map based on the region’s Metrolink tram network, which has revealed the striking differences in life expectancy across Greater Manchester.

The map shows estimated differences of more than a decade in life expectancy across Greater Manchester. For example, the journey by tram from Timperley to stops in central Manchester takes around 30 minutes, but the estimated difference in life expectancy between the areas could be more than 10 years, or around a year for every 3 minutes of the journey.

The tram journey from Timperley to Rochdale may take around 75 minutes, but the data suggests a difference in life expectancy between the areas could be up to 12 years.

Greater Manchester is in the ten areas with the lowest life expectancy in the UK. Dr Kingsley Purdam, part of the University’s Manchester Institute for Collaborative Research on Ageing said the map highlighted the strong association between the economic deprivation level of an area and life expectancy.

"The routes of the tram network provide a way of engaging the public in the health story of Greater Manchester, by linking the tram stops and journey times with ward-level life expectancy estimates," said Dr. Purdam. "The estimates are based on Office for National Statistics data on the mortality. They are not the exact number of years a baby born in the ward could actually expect to live, death rates and health care provision are likely to change in the future, and many of those born in the ward will live elsewhere for at least some part of their lives. However, the data does highlight the underlying inequalities in life expectancy."

On average people in Manchester have a life expectancy at birth of 75 years, compared to 83 years in East Dorset - the area with the highest life expectancy in the UK. This compares to the overall UK average of 82 years.

There is also a difference of 3 years in life expectancy between men and women in the UK, but in the metropolitan area of Manchester, the difference is 5 years, with the city having the lowest life expectancy of any area in the UK for women. These differences are also evident in terms of how long people are estimated to live in good health.

A range of often interrelated factors are linked to lower life expectancy such as low income, employment status, the local environment, access to health care, smoking and alcohol consumption, diet, exercise, social status and social isolation. The most common causes of death in the UK are from: circulatory diseases (including heart and stroke), cancer, respiratory diseases and dementia. Perhaps most striking is the economic gradient in differences in life expectancy across Greater Manchester and the UK as a whole.

Compared to the UK, life expectancy across most of Greater Manchester is low, and there are considerable differences across the area at the local level. Whilst people are living longer the gap between certain populations is growing. The differences are a human rights issue. The lost years of life not only have an impact on the individuals, but also on the families and friends they leave behind.

We hope this map can highlight the issue to the public and health professionals. The inequalities are a real challenge for the delivery of the new devolved health budget and services in Greater Manchester.

A blog by Dr Purdam on the research can be found here.