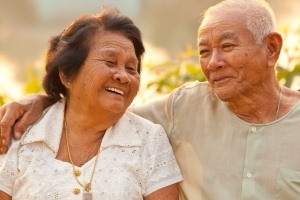 'Sexual health and wellbeing among older men and women in England' is the first piece of research of its kind to include people over the age of 80.

Older people are continuing to enjoy active sex lives well into their seventies and eighties, according to new research from The University of Manchester and NatCen Social Research.

More than half (54%) of men and almost a third (31%) of women over the age of 70 reported they were still sexually active, with a third of these men and women having frequent sex – meaning at least twice a month – according to data from the latest wave of the English Longitudinal Study of Ageing (ELSA).

The paper, lead authored by Dr. David Lee, an Age UK Research Fellow at The University of Manchester’s School of Social Sciences and entitled Sexual health and wellbeing among older men and women in England, is published in the American academic journal, Archives of Sexual Behavior.

It is the first study on sexual health of its kind to include people over the age of 80 and uncovers a detailed picture of the sex lives of older men and women in England, finding that a sizeable minority remain sexually active in their old age.

Contrary to popular misconceptions, it finds that overall health and conflicting partnership factors were more closely linked to decreasing sexual activity and functioning, rather than simply increasing age.

Of the more than 7000 people who responded to the questionnaire, very few (less than 3%) declined to answer direct questions about their sexual activities and problems.

Dr Lee said: “This is the first nationally-representative study to include people over the age of 80 when asking older men and women in England about their sexual health.

"We hope our findings improve public health by countering stereotypes and misconceptions about late-life sexuality, and offer older people a reference against which they may relate their own experiences and expectations.

"Our ongoing research is also highlighting the diversity of late-life sexualities, and trying to impose youthful norms of sexual health on older people would be over-simplistic and even unhelpful.

“It is however important that health professionals act on this and are more open about discussing sexual health with older people – it can’t simply be assumed to be an irrelevance."

We hope our findings improve public health by countering stereotypes and misconceptions about late-life sexuality, and offer older people a reference against which they may relate their own experiences and expectations

Problems most frequently reported by sexually active women related to becoming sexually aroused (32%) and achieving orgasm (27%), while for men it was erectile difficulties (39%). Chronic health conditions and poor self-rated health seemed to have more obvious negative impacts on the sexual health of men compared to women.

Men were more concerned about their sexual activities and function than women and, with increasing age, these concerns tended to become more common. Sexually active women were less dissatisfied with their overall sex lives than men, and also reported decreasing levels of dissatisfaction with increasing age.

Caroline Abrahams, Charity Director at Age UK, said: “The fact this is the first time that people over 80 years old have been included in this kind of research highlights how often the public health needs of older people, including sexual health, are ignored or overlooked.

“With an ageing population it is important that providers of sexual health services understand the needs of older people in both clinical settings and when developing information and advice. These recent findings now need to be used to improve sexual health advice and information for older people.”

David Lee and his colleague James Nazroo are available for interview.

NatCen Social Research is an independent, not for profit organisation. We believe that social research has the power to make life better. By really understanding the complexity of people’s lives and what they think about the issues that affect them, we give the public a powerful and influential role in shaping decisions and services that can make a difference to everyone.

Age UK is the country's largest charity dedicated to helping everyone make the most of later life. At Age UK we provide services, advice and support at a national and local level to inspire, enable and support older people. We stand up and speak for all those who have reached later life, and also protect the long-term interests of future generations.

To find out more about maintaining a healthy sex life, including advice on sex and relationships and information about sexual health, people can visit the Age UK website www.ageuk.org.uk. People can also contact their GP with any sexual health questions or concerns.