'Manchester is Britain’s city of languages' 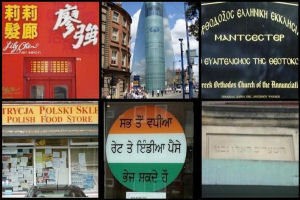 Manchester is the UK’s language capital, according to researchers at The University of Manchester.

The team based at the University’s Multilingual Manchester project say there could be up to 200 languages spoken by long-term residents in the Greater Manchester area – far higher than their previous figure of 153.

Around 40 per cent of Manchester’s young people and close to 50 per cent of the city’s adult population are likely to be multilingual according to the researchers.

Also according to the team, 3000 pupils at Manchester state schools sat GCSE exams in foreign languages in 2012.

A digest complied by the team is to be published online and launched at a special event on August 15, attended by representatives of Manchester’s local agencies and public services, including Manchester City council, police, fire, local hospitals and school services.

Coordinated by Professor Yaron Matras, the team which includes undergraduate students, has been working closely with local authorities, the NHS and schools to advise on the language needs of the city.

Professor Matras said: “Multilingual Manchester is the only project of its type anywhere in the world, so comparisons are going to be hard with other cities and local authority areas.

“But we do know Manchester has the densest multilingual population for its size in the UK and the highest population growth rate in England over the past decade.

“Its local authority is responsible for 480,000 people, bigger than any London borough, so in combination with the data from our research - it’s fair to assume that Manchester has one of the world’s most diverse linguistic cultures.

“A massive 80% of Manchester residents whose first language is not English report they speak English well or very well.”

The community languages with the largest number of speakers in Manchester are Urdu, Arabic, Chinese, Bengali, Polish, Panjabi, and Somali.

Urdu is the most popular community language: there are 10,005 Urdu books, and 6497 Urdu speaking pupils.

He added: “Manchester is very likely to be the most linguistically diverse city Europe, certainly when compared to other cities of its size, perhaps only outflanked by London and Paris.

“So Manchester’s language diversity is one of its greatest strengths. In fact language skills are often in demand, with online adverts in the first part of 2013 offering jobs in customer service, sales/marketing, management roles and teaching

“Jobs asking for knowledge of Arabic, Cantonese, French, German, Indonesian, Italian, Japanese, mandarin, Polish, Portuguese, Panjabi, and other languages were offered at a salary range of £16,000 to £35,000.”

Alex Robertson is a former linguistics student at the University and now a researcher on the project.

She said: Manchester’s language diversity is an incredible asset and I am delighted to have been part of a project which highlights this. After working closely with schoolchildren and services in the city, I can confidently say that our numerous languages are not a barrier, but a rich resource which holds powerful potential on a local and global scale.

“To have made the transition from undergraduate student to graduate researcher is an honour and a great pleasure for me. The practical experience has not only fuelled my academic interest in the topic, but granted me a unique opportunity to explore Manchester’s cultural fabric.”