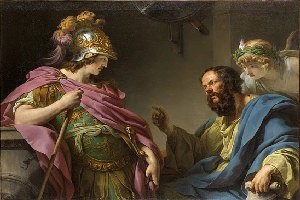 Plato lent his name to Platonic love but a new book reveals that the ancient Greek philosopher never advocated love without sex.

University of Manchester science historian Dr Jay Kennedy, who hit the headlines last year after revealing he had cracked the code in the great thinker’s writings, has now published a decoder’s manual that lays bare the secret content of Plato’s ancient works.

“Plato – the Einstein of Greece’s Golden Age – was long thought to favour love without sex, or ‘Platonic love’, but this new research reveals Plato was far from being a prude,” says Dr Kennedy, who is based in the Centre for the History of Science, Technology and Medicine, part of the University's Faculty of Life Sciences.

“The decoded symbols in fact show that Plato was not an advocate of Platonic love at all; rather he urged a middle path. For him, morality meant moderation – he wanted people to avoid both promiscuity and abstinence.

Dr Kennedy cracked the code within Plato’s texts last year when an unexpected insight led him to realise that Greek music was key to interpreting the writings of the Athenian philosopher and mathematician. Kennedy’s new book, The Musical Structure of Plato’s Dialogues, reports on the hidden doctrines revealed so far, including those in The Symposium, a philosophical text concerned with love.

“Plato’s teacher Socrates famously spent the night alone with the leading sex-symbol of ancient Athens but resisted temptation,” says Dr Kennedy. “Plato tells the story to show that true love aims at the soul and not the body, so many thought he was anti-sex and the myth of Platonic love spread far and wide. But Plato also celebrated eroticism and homosexuality, and shared the Greek view that naked bodies were beautiful, so historians have long debated his views.”

Socrates was later executed for corrupting the morals of young people and Dr Kennedy has now shown that Plato, also fearing persecution, hid his own philosophy using a system of musical symbols.

“Plato divided each of his writings into 12 parts, inserting a symbol marking a musical note at each twelfth,” explains Dr Kennedy. “At harmonious notes he placed positive ideas such as love and goodness, while at dissonant notes he placed negative ideas such as rejection, quarrelling and evil. These musical patterns are a hidden commentary on Plato’s stories and tell us which characters and which ideas he favoured.”

There are also a number of symbols that reveal that Plato rejected both promiscuity and asceticism. It can now be definitely shown that, for Plato, virtue was a middle path or mean that avoided extremes.

The term ‘Platonic love’ originated only 500 years ago. In the Renaissance, postponing sex was an important step toward the equality of women; the Queen of England even commissioned plays to spread the idea. At a time when women were treated as slaves or baby-machines, Platonic love meant longer courtships and delaying the dangers of childbirth.

Kennedy adds: “At the beginning of the modern era, women cleverly used Plato’s reputation as a genius to get men to pay attention to their minds. Platonic love was an argument for not settling down and allowing women to participate in arts and culture in the royal court. When sex often meant an early death, Plato was a licence for having more fun.

“Plato's importance cannot be overstated. He shifted humanity from a warrior society to a wisdom society. Today, because of him, our heroes are Einstein and Shakespeare and not knights in shining armour.”

Plato and his students collected the achievements of the ancient Greeks in their books, which became the founding documents of Western culture. Today every major university has experts in their writings. These scholars, however, uniformly denied the ancient view that Plato’s writings were symbolic. Dr Kennedy’s findings have therefore come as a shock.

Since first reporting that he cracked the code in the journal Apeiron, Kennedy has been lecturing on these findings at universities in London, Leeds, Durham and Manchester, and will soon be appearing at academic conferences in New York City and Rio de Janeiro. A dozen top-flight scholars are preparing a volume debating the implications of his discovery.

Plato led a colourful and fascinating life. Born four centuries before Christ, when Sparta defeated plague-ravaged Athens, he wrote 30 books and founded the world's first university, called the Academy. In addition, he was captured by pirates and sold into slavery before being ransomed by friends.

Further background information about the book, the research and Plato can be found on Dr Kennedy’s website: http://personalpages.manchester.ac.uk/staff/jay.kennedy/

Images of Dr Kennedy are available on request.

“Be kind, for everyone you meet is fighting a hard battle.”

“If women are expected to do the same work as men, we must teach them the same things.”

“Ignorance: the root of all evil.”

“Only the dead have seen the end of war.”

“The price good men pay for indifference to public affairs is to be ruled by evil men.”