Two University of Manchester students have won the highest award possible at this year’s prestigious Undergraduate Awards in Dublin, Ireland.

The pair’s accomplishments weren’t the University’s only prize-winning student success at the summit. Sarah Joliffe, who studied Nursing at Manchester, was named the Regional Winner for Europe in the Nursing, Midwifery, & Allied Care category, whilst nine others Highly Commended and a further 18 were commended for their work.

The awards are part of the Global Undergraduate Summit, a three-day conference which is regarded as “the world's leading academic awards” that brings together “the world’s top performing students”. This year those taking part in the competition came from 60 universities across19 countries to present in 25 different categories.

Cristian, who has now graduated from Manchester and is studying a master’s in Advanced Computer Science at Cambridge, said: “It feels really rewarding to get the prize after nine months of working almost non-stop. At times the work got very frustrating. But I am delighted that I managed, in the end, to bring something new to the field and receive such a prestigious recognition for that.”

Amelia, who was equally as pleased to win, said: “I am absolutely honoured to have won such a prestigious award; I worked incredibly hard and am incredibly proud of the piece of research I submitted and it is amazing that my achievement has been globally recognised.”

Amelia says the recognition is even more special for her personally due to having some issues with her mental health. “I have struggled with anxiety and depression for most of my life, so winning this award felt like a ray of sunshine, reminding me that I am more than capable of achieving whatever I put my mind to,” she added. “Ultimately, I am delighted and inspired by winning this award.” 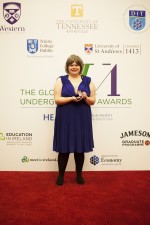 I am absolutely honoured to have won such a prestigious award; I worked incredibly hard and am incredibly proud of the piece of research I submitted and it is amazing that my achievement has been globally recognised.

As well as winning their awards, Cristian and Amelia have also gained valuable contacts, shared new experiences and, most importantly, made new friends in Dublin. Christian added: “I learned a lot about what the other winners did and also met so many nice people from all over the world. It was really interesting to discover what their story was and what they want to do in the future.”

Amelia agreed: “I made a great number of friends at the Summit who I hope to remain in contact with for a long time, keeping up to date with their research and their own powerful impacts on the world.”

This year, in total, the awards received more than 4,800 submissions from undergraduates in 333 universities from 46 countries. The students presented their research in 25 different categories showcasing work from across the sciences, humanities, business and the creative arts.

Professor Kersti Börjars, lead on the University’s Learning through Research project, said “I am really pleased to see the breadth of achievement across the University, this is evidence not just of the calibre of our students, but also of the value of being an undergraduate at a research intense University.”

Executive Director of the Awards, Dr Garret Maher spoke of the significance of the Global Undergraduate Summit: “It helps young students understand their responsibility to engage in issues of global importance and encourages debate in an atmosphere of solidarity. This experience will contribute to how they conduct their professional lives in the future.”