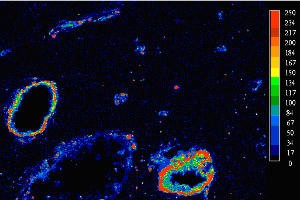 Scientists from The University of Manchester have identified preserved organic molecules in the skin of a dinosaur that died around 66-million years ago.

The well-preserved fossil of the plant-eating hadrosaur – known as ‘Dakota’ – has been analysed by researchers writing in the journal Proceedings of the Royal Society B.

The team report how the fossil's soft tissues were spared from decay by fine sediments that formed a mineral cast.

A wide range of tests have shown that the fossil still holds cell-like structures, although the constituent proteins have decayed.

Advanced imaging and chemical techniques have revealed that the mummified duckbilled dinosaur had two layers of skin – just like the skin of modern birds and reptiles, which scientists believe are closely related to duckbilled dinosaurs.

They believe the hippo-sized Dakota fell into a watery grave, with little oxygen present to speed along the decay process. Meanwhile, very fine sediments reacted with the soft tissues of the animal, forming a kind of cement.

As a result, the 66 million-year-old fossil still retains some of the organic matter of the original dinosaur, mixed in with the minerals.

"You're looking at cell-like structures; you slice through this and you're looking at the cell structure of dinosaur skin,” said Dr Phil Manning, Senior Lecturer in Palaeontology & Research Fellow School of Earth, Atmospheric & Environmental Sciences (SEAES). “That is absolutely gobsmacking."

A copy of the paper and images are available on request.