New "Made in Persia" project supported by University academic

The project, Made in Persia, is by artist Mahboobeh Rajabi and is supported by Dr Jenna C. Ashton, Lecturer in Heritage studies, Institute for Cultural Practices. Supported by Arts Council England. 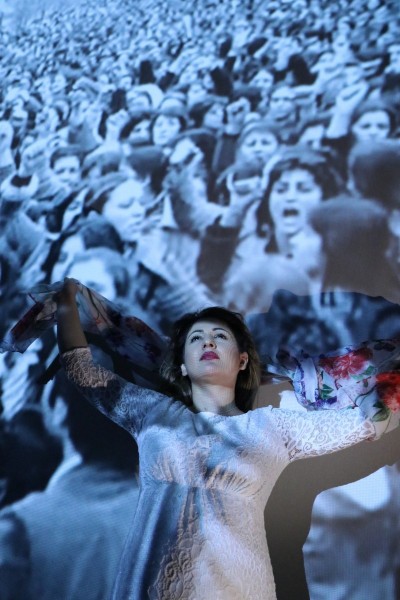 In 1979, revolution in Iran resulted in the toppling of the monarchy and led to the establishment of an Islamic republic. Women’s roles and status in society radically changed from that moment on.

Mahboobeh Rajabi is an Iranian artist in Manchester, focusing on giving platforms to untold stories. Mahboobeh uses digital art, theatre, film, documentary, writing and especially storytelling and poetry to bring out hidden voices that must be heard.

Mahboobeh has been working on different projects, focusing on human rights especially women's rights, global immigration storytelling, culture and mental health, with different communities across Greater Manchester and North West of England for the past 10 years. Her works have driven her to work internationally with the European Cultural Foundation and the World Health Organisation. She was also awarded the MIF Jerwood Creative Fellowship in 2017.

Mahboobeh first created the performance 'Dancing The Lash' for the pop-up performance project at the Manchester Museum in 2017 as part of 'Flying Carpets' and 5 other artists and groups. 'Dancing The Lash' was the story of dancing which is forbidden in Iran, told from an Iranian character who was a dancer and was living as a refugee in the UK.

In 2018 she developed the piece for the REACT festival, with the direction of Cilla Baynes, former creative director of CAN and winner of the Inspiration Change Award from the Women of The World Festival in 2018. Mahboobeh wrote the story with her husband who is also from Iran and the same generation, telling the story of her childhood and teenage time before coming to the UK, and never being able to pursue dance because it's forbidden in Iran.

The ‘Girlhood’ project (2020), with the University of Manchester and Digital Women's Archive North [DWAN], inspired Mahboobeh to continue her deep research on hidden voices of Iranian women during and after the 1979 revolution, and share it through her art.

There will be a Q&A during summer 2021, sharing of the progress of Made in Persia.