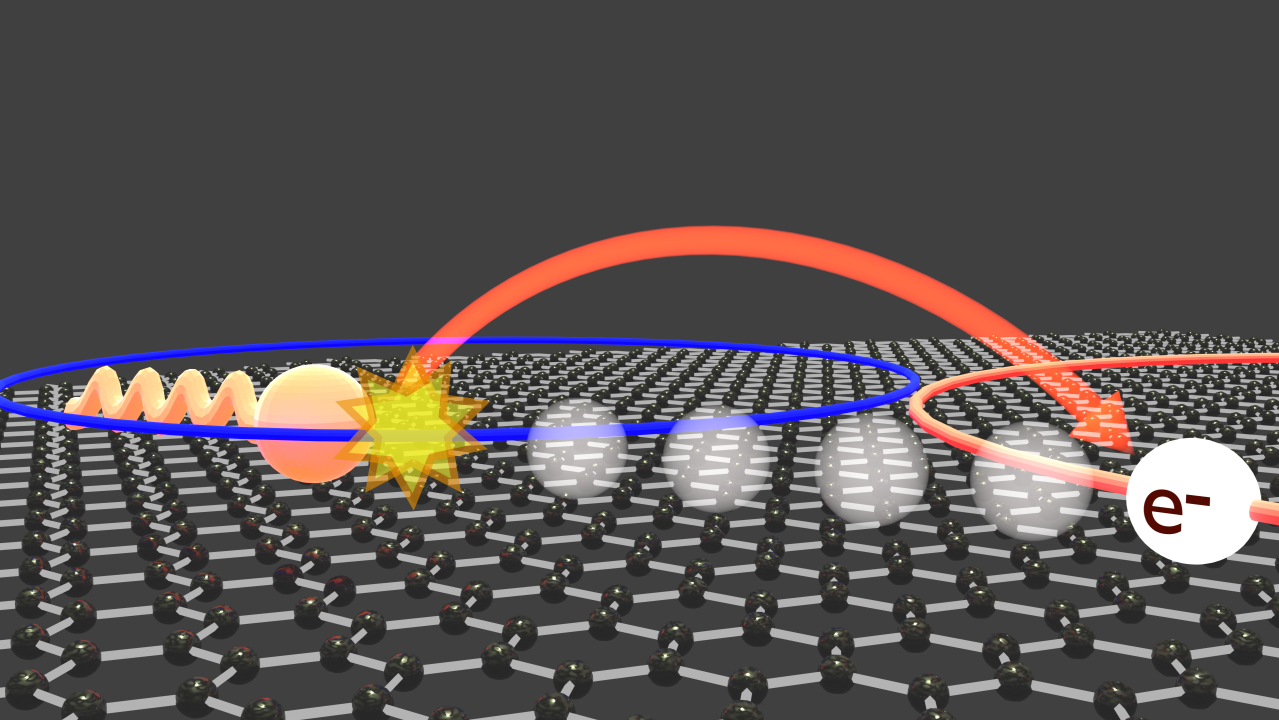 A team of researchers from the Universities of Manchester, Nottingham and Loughborough have discovered quantum phenomena that helps to understand the fundamental limits of graphene electronics.

As published in Nature Communications, the work describes how electrons in a single atomically-thin sheet of graphene scatter off the vibrating carbon atoms which make up the hexagonal crystal lattice.

By applying a magnetic field perpendicular to the plane of graphene, the current-carrying electrons are forced to move in closed circular “cyclotron” orbits. In pure graphene, the only way in which an electron can escape from this orbit is by bouncing off a “phonon” in a scattering event. These phonons are particle-like bundles of energy and momentum and are the “quanta” of the sound waves associated with the vibrating carbon atom. The phonons are generated in increasing numbers when the graphene crystal is warmed up from very low temperatures.

By passing a small electrical current through the graphene sheet, the team were able to measure precisely the amount of energy and momentum that is transferred between an electron and a phonon during a scattering event.

Their experiment revealed that two types of phonon scatter the electrons: transverse acoustic (TA) phonons in which the carbon atoms vibrate perpendicular to the direction of phonon propagation and wave motion (somewhat analogous to surface waves on water) and longitudinal acoustic (LA) phonons in which the carbon atoms vibrate back and forth along the direction of the phonon and the wave motion; (this motion is somewhat analogous to the motion of sound waves through air).

The measurements provide a very accurate measure of the speed of both types of phonons, a measurement which is otherwise difficult to make for the case of a single atomic layer. An important outcome of the experiments is the discovery that TA phonon scattering dominates over LA phonon scattering.

We were pleasantly surprised to find such prominent magnetophonon oscillations appearing in graphene. We were also puzzled why people had not seen them before, considering the extensive amount of literature on quantum transport in graphene.

Laurence Eaves and Roshan Krishna Kumar, The University of Manchester
„

The observed phenomena, commonly referred to as “magnetophonon oscillations”, was measured in many semiconductors years before the discovery of graphene. It is one of the oldest quantum transport phenomena that has been known for more than fifty years, predating the quantum Hall effect. Whereas graphene possesses a number of novel, exotic electronic properties, this rather fundamental phenomenon has remained hidden.

Laurence Eaves & Roshan Krishna Kumar, co-authors of the work said: “We were pleasantly surprised to find such prominent magnetophonon oscillations appearing in graphene. We were also puzzled why people had not seen them before, considering the extensive amount of literature on quantum transport in graphene.”

Their appearance requires two key ingredients. First, the team had to fabricate high quality graphene transistors with large areas at the National Graphene Institute. If the device dimensions are smaller than a few micrometres the phenomena could not be observed.

Piranavan Kumaravadivel from The University of Manchester, lead author of the paper said: “At the beginning of quantum transport experiments, people used to study macroscopic, millimetre sized crystals. In most of the work on quantum transport on graphene, the studied devices are typically only a few micrometres in size. It seems that making larger graphene devices is not only important for applications but now also for fundamental studies.”

The second ingredient is temperature. Most graphene quantum transport experiments are performed at ultra-cold temperatures in-order to slow down the vibrating carbon atoms and “freeze-out” the phonons that usually break quantum coherence. Therefore, the graphene is warmed up as the phonons need to be active to cause the effect.

Mark Greenaway, from Loughborough University, who worked on the quantum theory of this effect said: “This result is extremely exciting - it opens a new route to probe the properties of phonons in two-dimensional crystals and their heterostructures. This will allow us to better understand electron-phonon interactions in these promising materials, understanding which is vital to develop them for use in new devices and applications.”