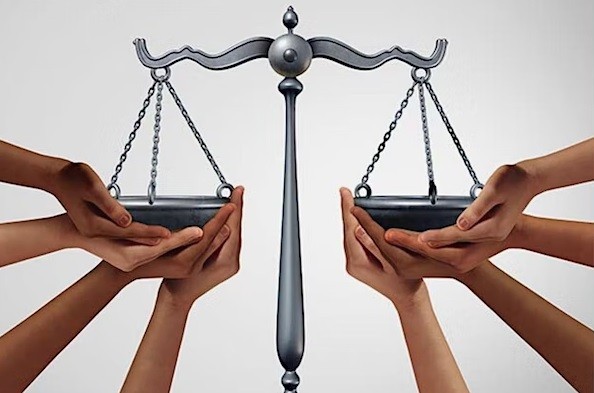 racial bias and the bench hands and scales

A new report by experts from The University of Manchester and barrister Keir Monteith KC has raised urgent questions about racial attitudes and practices in the justice system in England and Wales.

Although the judiciary wields enormous power over individuals, its operations are alarmingly underscrutinised, and one area that has remained largely beyond examination is judicial racial bias. The report draws on a survey of 373 legal professionals.

95% of respondents said that racial bias plays some role in the processes or outcomes of the justice system, and 29% said it played a ‘fundamental role’. A majority of respondents had witnessed one or more judges acting in a racially biased way towards a defendant and in their decision-making.

Racial discrimination by judges is most frequently directed towards Asian and Black people according to the survey, with people from Black communities - lawyers, witnesses, defendants, etc. - by far the most common targets of judicial discrimination. Young Black male defendants were the subgroup most frequently mentioned as targets of judicial bias.

The survey did find that some judges are already acting in ‘antiracist’ ways by being conscious of and knowledgeable about racism, and seeking to mitigate it - however, only a minority of respondents had ever seen a judge act in this way.

Race training is neither compulsory nor provided on a regular basis – only 49% of the respondents who have worked as judicial office holders had received race training in the preceding three years.

The report emerges as serious questions are already being asked about the treatment of ethnic minority people in the justice system. Black barristers are underrepresented and report experiencing racism from judges, magistrates and panel members. On top of this, The Lammy Review and the Race at the Bar report found that sentencing outcomes are often harsher for ethnic minority defendants.

Overall, the report suggests that the combination of quantitative and qualitative data presented, substantiated by the kind of reports listed above, amounts to evidence of ‘institutional racism’ in the justice system presided over by judges.

The report is a response to the five-year strategy launched by Lord Chief Justice Lord Burnett of Maldon to enhance equality and diversity in the judiciary, and finds that it does not consider the issue of racism or even mention ‘racial bias’. Researchers found a profound disparity between the conclusions of the strategy - that the justice system is basically fair and that progress has been made - when compared to the widespread views and experiences of the legal professionals surveyed.

In addition, the report is critical of the Equal Treatment Bench Book, the textbook given to all judges on appointment, in terms of its framing of bias and racism, especially its lack of acknowledgement of anti-Black racism in the justice system.

The evidence in the report rings alarm bells about access to fair trials, hearings and tribunals as well as to equal professional development.

“Racism in the justice system has to be acknowledged and fought by those at the highest level, but at the moment there is complete and utter silence - and as a consequence, there is no action to combat racial bias,” said Keir Monteith KC. “It is impossible to have diversity and inclusion if the system itself unfairly discriminates. There has to be a hard reboot to protect and revitalize the rule of law and civil rights for all citizens - a good start would be to follow the recommendations in our report.”

“Judges need to sit up and listen, because it is a myth that Lady Justice is blind to colour,” said Professor Leslie Thomas KC, who wrote the report’s Foreword. “Our judiciary as an institution is just as racist as our police forces, our education system and our health service - this is something that cannot be ignored for any longer.”

Judges are usually seen - and often see themselves - as neutral arbiters, but this can be far from the truth. Our findings show that from their demeanour to their decision-making, judges often play a role in fuelling and normalising the terrible disparities in our legal system. The sooner this is widely realised, the sooner change can be instigated.

“This important report demonstrates that the very low number of Black and minority ethnic judges poses an acute challenge to the credibility and legitimacy of the judiciary,” said Stephanie Needleman from JUSTICE. “It is only by creating a critical mass of diverse judges that we can ensure that our judiciary is reflective of society and begin to combat the racism witnessed by survey respondents.”

“We welcome, and are grateful to have been consulted on, this hard-hitting report,” said former Judge Claire Gilham from the Judicial Support Network. “My whistleblowing about racism was dismissed as me not understanding judicial culture, having come from the wrong background. There is no internal data keeping for equality complaints, which makes it very difficult for the judiciary to provide any evidence to deny the findings of this report. A severe shake-up of the system is needed.”

“Even after 25 years as a Trade Union Official, I am shocked at the practices employed in the appointment and promotion of judges,” said Stuart Fegan from GMB. “The Judiciary is funded with public money, and the practices identified would simply not be tolerated anywhere else in the public sector. I am delighted that Labour have committed to review appointment and promotion procedures if they win the next election in order to ensure that judges are reflective of the public they serve.”