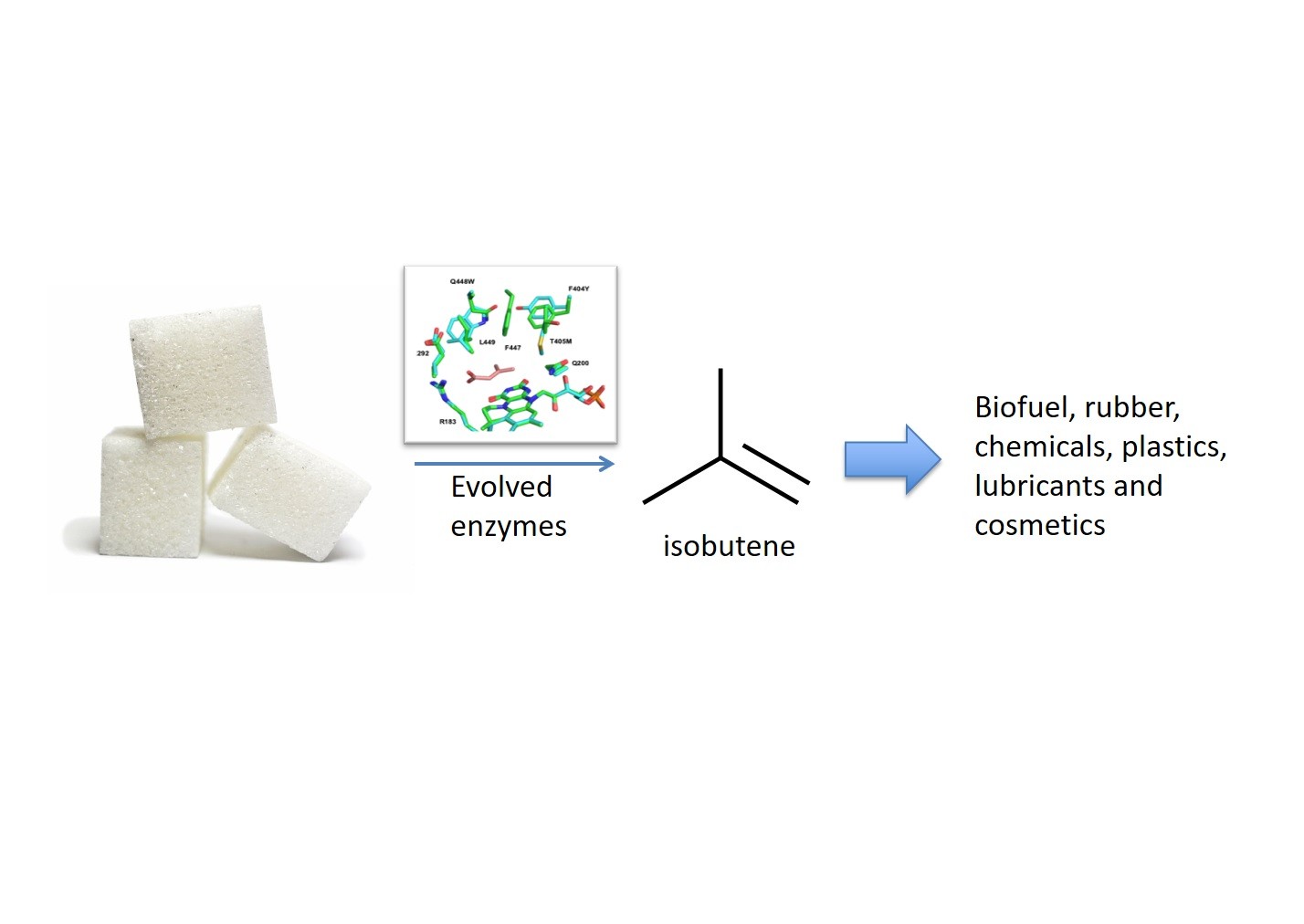 New research published today details a breakthrough in the creation of evolved enzymes to support a renewable process to make one of the key building blocks of the chemical industry used in everything from beauty products to fuel.

The newly published findings are the result of collaborative work between Global Bioenergies and the team of Dr. David Leys at The University of Manchester, and have been published today in Nature Communications. This paper describes the evolution and mechanism of isobutene forming enzymes far superior to previously used catalysts. Isobutene is a high value gaseous hydrocarbon, and one of the major building blocks of the petrochemicals industry: 15 million tonnes are produced every year to yield cosmetic ingredients, rubber and fuels.

This is the first time a member of a widespread enzyme family that depends on an unusual vitamin B2 derivative has been repurposed to yield isobutene. This has been made possible through the extensive work performed on both sides of the Channel, with laboratory guided evolution carried out at Global Bioenergies, and detailed structure analysis of the the evolved enzymes at The University of Manchester.

David Leys, group leader at the Manchester Institute of Biotechnology of The University of Manchester, says: “Our collaboration with Global Bioenergies on the subject of isobutene production combines in a unique manner quantitative molecular bioscience and industrial, high-throughput approaches. It is very satisfying to see how fundamental understanding of these enzymes obtained with European Research Council funding supports industrial application. The evolved enzymes represent several orders of magnitude improvement in the efficiency of isobutene bioproduction, directly contributing to an economically viable and renewable process, and thus a more sustainable future.”

The evolved enzymes represent several orders of magnitude improvement in the efficiency of isobutene bioproduction, directly contributing to an economically viable and renewable process,  and thus a more sustainable future.

Marc Delcourt, co-founder and CEO of Global Bioenergies, adds: “Nature Communications stands among the high-class peer-reviewed scientific journals. We are very pleased to see the work we conducted jointly with the team of Dr David Leys reaches such a striking scientific recognition. The evolved enzymes, on which GBE holds exclusive intellectual property rights for the isobutene production, will have a significant role in the environmental transition our world is now engaged in.”

As an alternative to fossil fuel derived isobutene, Global Bioenergies assembled a modified pathway for the production of isobutene from glucose. The crucial final step yielding the desired product makes use of a decarboxylase enzyme. This particular enzyme has been evolved from naturally occuring microbial decarboxylases that depend on an elaborately modified Vitamin B2 (called prenylated flavin or prFMN) for activity.

The Manchester group has been at the forefront of studying these prFMN-dependent catalysts, and determined structure and biochemical properties of isobutene yielding enzymes evolved by Global Bioenergies. The company screened an enzyme library for inherent isobutene production activity, and used directed evolution to yields variants with up to an 80-fold increase in activity. Structure determination of the evolved catalysts reveal that changes in the enzyme pocket are responsible for improved production, while solution and computational studies suggest that isobutene release is currently the limiting factor.

Global Bioenergies has developed a unique conversion process for renewable resources into isobutene, one of the main petrochemical building blocks that can be converted into ingredients for cosmetics, petrol, kerosene, LPG and plastics.