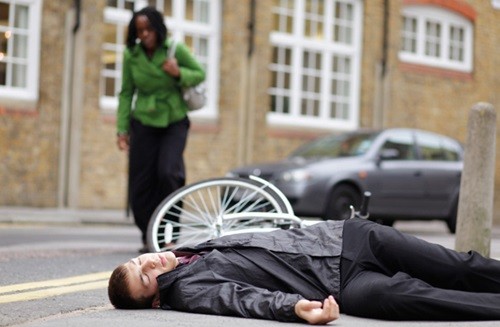 Up to 59% of ‘pre-hospital’ deaths from injury could potentially be prevented if more people stepped in with some simple first aid, according to new research commissioned by the British Red Cross and conducted by the University of Manchester.

Whilst 93% of people will call for an ambulance if they find someone with an injury, first aid intervention of any kind was infrequent. Around half of the cases in this study did not attempt any first aid while waiting for the emergency medical services to arrive.

“The good news is that most people are calling 999,” said Joe Mulligan, head of first aid education at the British Red Cross. “However, after calling 999, we want people to then do something in those crucial minutes before the ambulance arrives. Every person needs to recognise that in an emergency, you are part of the ‘chain of survival.”

The British Red Cross is calling for everyone in the UK to learn two basic first aid skills that could help to prevent the number of people who die from injuries, such as those resulting from falls or road traffic accidents, before reaching hospital.

“Sadly in the majority of deaths we looked at, the simplest interventions could have helped keep someone alive until they got to hospital. For example, something as simple as turning someone on their side and tilting their head back to keep their airway open could be all it takes to make that difference between life and death in certain situations”.

The two first aid skills identified by British Red Cross as being the most essential in cases of accidental injury and trauma are:

- If the person is unresponsive and breathing, open their airway so they can continue to breathe. Do this by placing them on their side with their head tilted back.

- If they are bleeding heavily, stop them from bleeding to death by putting pressure on any heavily bleeding wounds.

The charity is also calling for more opportunities to learn first aid throughout one’s lifetime, starting at school, but also through the driving test and public health initiatives, for example.

Find the report and more about the campaign at www.redcross.org.uk/dontstopat999.