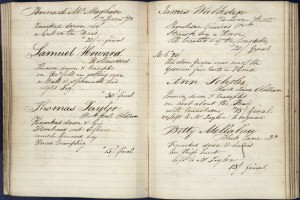 An iconic document belonging to The University of Manchester’s John Rylands University Library is one of the first items inscribed on the UK Memory of the World Register, which recognises documentary heritage of national significance.

The Peterloo Relief Fund Account Book provides vivid, first-hand evidence of one of the most significant events in British history, the Peterloo Massacre of 1819.

A Relief Fund was established after Peterloo, supported by voluntary subscriptions, to provide financial assistance to those who were injured and the families of the dead.

The Account Book records the names of 350 people who received payments from the fund, along with graphic descriptions of their injuries and the circumstances in which they were hurt.

Jan Wilkinson, University Librarian and Director of the John Rylands Library said: “The Peterloo Relief Fund Account Book is a unique and irreplaceable manuscript. It provides vivid, first-hand evidence of the Peterloo Massacre.

“With its graphic descriptions of the injuries sustained, it captures the shocking nature of Peterloo, and helps to explain the political impact that the event had in the immediate aftermath and in subsequent decades.

“No other single piece of documentary heritage relating to Peterloo has this effect. We are delighted that the importance of the Account Book has been recognised through its inclusion on the UK Memory of the World Register.”

The ten winners were chosen by the expert committee of the UK Memory of the World programme following a nomination and review process which began in 2009.

They have been inscribed on the register, an online catalogue created to help promote the UK’s documentary heritage across the UK and the world.

Many experts believe Peterloo was the most significant event in the history of Manchester, the world’s first industrial city.

On 16 August 1819 a crowd of around 80,000 people gathered in St Peter’s Fields, calling for Parliamentary reform and the abolition of the Corn Laws.

The magistrates declared the meeting illegal, and ordered the special constables and yeomanry cavalry to disperse the crowd. At least fifteen people were killed and over four hundred injured. The event was soon christened the Peterloo Massacre, an ironic echo of the Battle of Waterloo four years earlier.

The register is part of a United Nations Educational, Scientific and Cultural Organization (UNESCO) programme to support and raise awareness of archives.

The first entries on the UK Register are launched today (14 July) at www.unesco.org.uk/ukregister.

“We were incredibly impressed by the diversity and richness of the first nominations to the register,” said David Dawson, Chair of the UK Memory of the World Committee. “Given the UK’s rich documentary history, I’m sure these winners are just the tip of the iceberg. We hope this will encourage more people to get involved with their local archives and museums.”

The ten items and collections will be honoured at the House of Lords on 14 July at an event hosted by the All Party Parliamentary Group on Archives.

‘John Baker, 3 Pump Street. This poor man was beat by the Constables, but his principal injury was an overstrain by carrying Wm. Taylor of Boardman Lane off the Field, who was wounded & lost so much blood. 40/- final. [£2]’

An image is available

Dr Mike Sanders, an expert on nineteenth century working-class protest from The University of Manchester is available for comment.

The John Rylands University Library holds extensive collections relating to Peterloo, including correspondence of both radicals and the authorities; printed placards, broadsides and notices; and contemporary newspaper reports.

The John Rylands University Library (JRUL), The University of Manchester, has world-renowned research collections. It was recently designated by HEFCE as one of only five National Research Libraries - the only one located in the north of England.