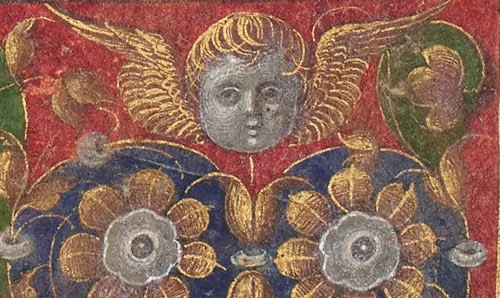 For the last three years, colleagues from The University of Manchester, University of Leeds and University of Oxford have been working together on a project researching the commentary tradition of the poetic works of the Italian Renaissance figure Francesco Petrarca (1304-74) or Petrarch.

Petrarch is most well known as a poet but he was also a prolific scholar, and is often cited as the “father of humanism”. He was an extremely influential figure at the beginning of the Renaissance, and his works were instrumental in the formation of the modern Italian language.

The project focussed on material produced in Italy between 1350 and 1650 that examined or provided a commentary on Petrarch’s works, cataloguing more than 400 individual manuscripts and 300 early printed books. They illustrate the incredible impact of Petrarch’s poetry during his life and for hundreds of years afterwards.

Dr Guyda Armstrong and Julianne Simpson led on the project’s online digital library. This library encompasses approximately 84 works housed in The John Rylands Library and 14 further editions from the Special Collections of the Hesburgh Library at the University of Notre Dame, USA.

The digital library, which is available to anyone via Manchester Digital Collections, presents not only images of digitised books and other items but interpretation providing the viewer with interesting insights.

The John Rylands Library has one of the most extensive collections of early printed Petrarch material anywhere in the world, and our new image viewer now allows us to share our spectacular holdings with the scholarly community. Users will be able to gain an insight into the book cultures of Renaissance Italy and the many different ways in which Petrarch was packaged and discussed by his various reading communities.

Dr Guyda Armstrong, Senior Lecturer in Italian Studies at the University of Manchester
„

It is hoped that the project will open up new directions for research around one of Italy’s best-known medieval poets.

The digitised works can be viewed online now, via Manchester Digital Collections.