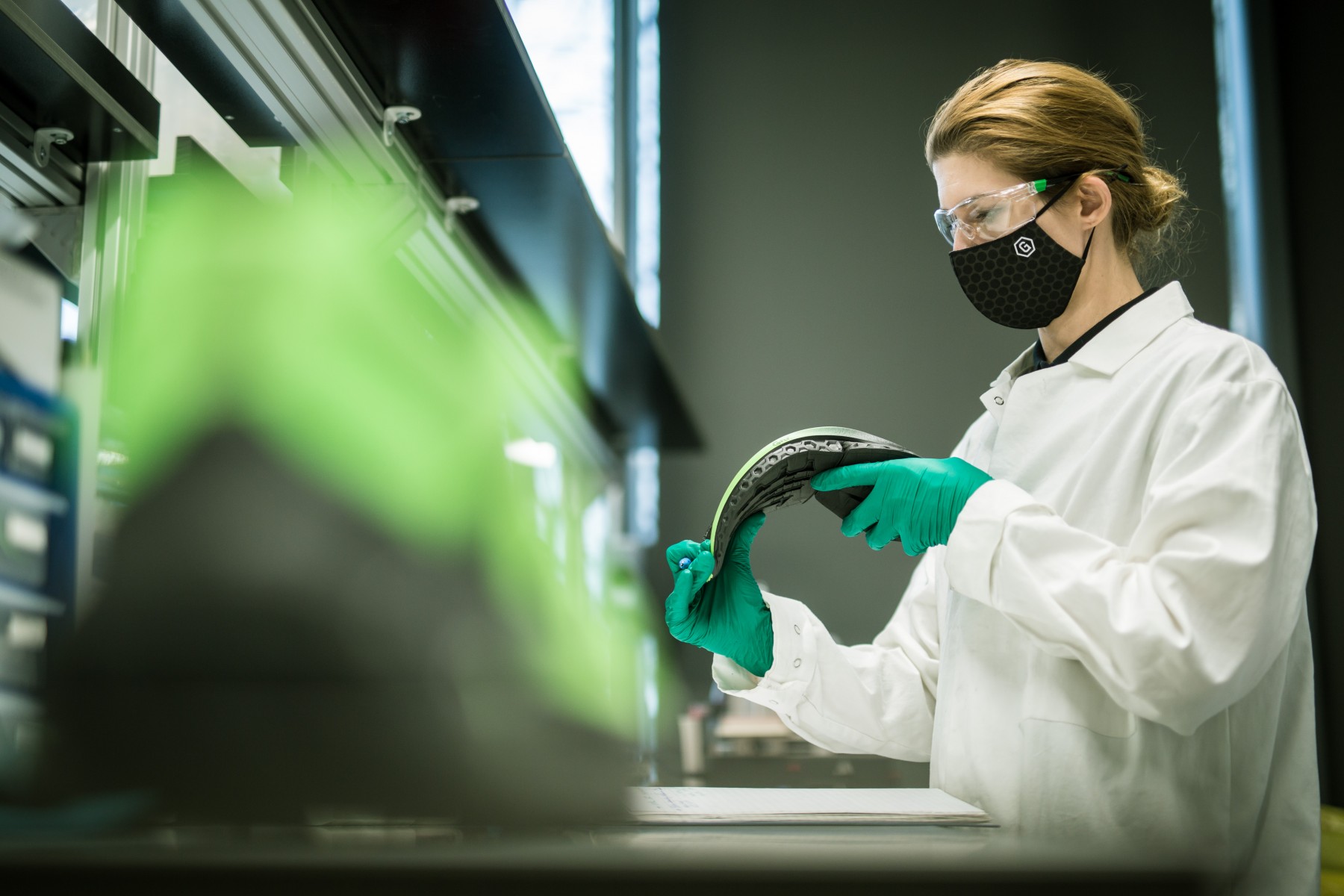 The ongoing collaboration between The University of Manchester’s graphene scientists and Northern England-based outdoor sports brand inov-8 has been awarded as an ‘outstanding’ example of innovation and wealth creation in the UK by Innovate UK.

The partnership, which has seen the launch of and subsequent development of the high-performance graphene-enhanced footwear, is now in the spotlight for its success in taking fundamental research to a successful global hit product.

Officially launched in 2018, the collaborative partners announced that they had been able to develop a graphene-enhanced rubber through a research project which began behind the scenes in 2016.

They developed G-GRIP rubber outsoles for running, hiking and fitness shoes that in testing outlasted 1,000 miles, are scientifically proven to be 50% harder wearing, and deliver the world’s toughest grip.

Subsequently, graphene was infused into the midsole foam as well, to provide superior and long-lasting energy return that supercharges feet. The G-FLY foam midsole was launched in 2021.

Aravind Vijayaraghavan, Professor of Nanomaterials at The University of Manchester, said: “This partnership is an excellent example of how a university research group and a SME can collaborate closely to take cutting edge technology from lab to market at a rapid pace. It demonstrates the significant benefits that graphene can bring to everyday products and impact our daily lives.”

Now Innovate UK has honoured the recently completed Knowledge Transfer Partnership between the two organisations with the highest possible grade of ‘Outstanding’. The project has set the bar high, resulting in not only a world-leading product range, but also a highly effective partnership that is boosting the University’s commercial reputation – and that of a fellow northern brand.

This partnership is an excellent example of how a university research group and a SME can collaborate closely to take cutting edge technology from lab to market at a rapid pace. It demonstrates the significant benefits that graphene can bring to everyday products and impact our daily lives.

inov-8 founder Wayne Edy said: “This powerhouse forged in Northern England has taken the world of sports footwear by storm. We’re combining science and innovation together with entrepreneurial speed and achieving incredible things.”

Graphene is the lauded atomically thin material, first isolated from graphite by Manchester scientists, leading to the award of the Nobel Prize in Physics in 2010. At just one atom thick it is lightweight yet incredibly strong, meaning it has many unique properties. inov-8 was the first brand in the world to use the material in sports footwear, and both G-GRIP and G-FLY are patent-pending technologies.

That footwear has since gone on to win multiple awards. The TRAILFLY G 270 and TRAILFLY ULTRA G 300 MAX were both named ‘Trail Running Shoe of the Year’ in the Runner’s World UK Gear Awards for 2020 and 2021 respectively. Graphene-enhanced shoes have also been worn by athletes to set records, especially over ultramarathons distances. Damian Hall wore them to set a new fastest time for the 185-mile Wainwright’s Coast to Coast trail in 39 hours and 18 minutes, as did Jasmin Paris to famously win the 268-mile Spine Race outright and set a new record time that still stands.

The ongoing research and innovation has now also seen the KTP Associate, Dr Nadiim Domun, hired by inov-8 as a Senior Materials Engineer to retain his expertise and to continue the graphene technology development through close collaboration with The University of Manchester.

Graphene has the potential to change lives in so many ways. Athletic equipment is just one current success story for the versatile material. Water filtration, aviation and consumer electronics are among the many applications that are exciting scientists, product developers and the public the world over.

2021 saw Manchester placed at the top of the table for the UK's Knowledge Transfer Partnerships and become partner of choice for innovation in businesses.