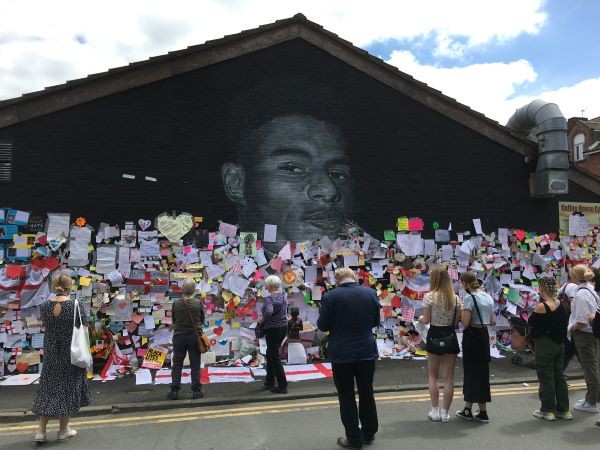 Students from The University of Manchester have been involved in a project to catalogue and preserve tributes left on the Marcus Rashford mural in Withington, after thousands of people had covered over offensive graffiti with positive messages.

Footballer Marcus Rashford - who is also an Honorary Professor at The University of Manchester - was sadly one of three players to miss a vital England penalty in the Euro 2020 final shootout against Italy. After the match, offensive graffiti was daubed on the mural, which had been painted by Manchester artist Akse last November in tribute to Rashford’s tireless work on child poverty.

In response, thousands of people gathered over the subsequent week to leave heartfelt messages of love and support on the wall for all to see - this made headlines around the world, and people travelled from all over the country to be involved in this national moment of shared solidarity.

A prolonged period of warm, dry weather allowed the huge amount of messages to be added to and read by hundreds of people. However, before the inevitable rain came, The University of Manchester - in collaboration with the Manchester Art Gallery, Central Library's Archives department, the People's History Museum, the National Football Museum and mural commissioners the Withington Walls project - collaborated to preserve the tributes on Marcus Rashford’s mural, to ensure these messages of solidarity were not lost to future generations.

MA students from the Institute of Cultural Practices at The University of Manchester participated in this. They were on hand to help collect the messages and document the removal process, as a team of professional staff from Manchester Art Gallery and Central Library Archives+ removed each message.

After their removal, the messages and tributes were taken to the Central Library's archives department for safekeeping. There are currently talks regarding where the messages will be kept, and how they will be made more widely available to the public in the future. The hope is that by preserving the messages, they will be permanently available as an important reminder of this significant moment in the city and country’s cultural history.

"The support and respect shown for Marcus and his teammates through the thousands of tributes left at his mural has been amazing and wonderful to see,” said Councillor Luthfur Rahman OBE, Deputy Leader of Manchester City Council. “The actions of all those who have turned up in solidarity to see his mural and leave their own messages of love and support for him has 'Manchester' stamped all the way through it.

We think it's important this shared moment of solidarity - that started with the placing of just one small message of love on the mural after it was defaced - an action that spoke to the whole country and not just Manchester, is remembered and preserved for future generations.

"We're reaching out to Marcus with some thoughts on how this could be achieved and to ask what he would like to happen to the tributes, to help create a lasting legacy of tolerance, love, and solidarity for future generations to learn from."