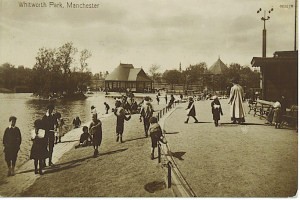 A University of Manchester researcher has revealed a rowdy side to the history of our Victorian and Edwardian public parks.

Ruth Colton says children were central to the establishment of our well-loved parks which were places where they were encouraged to behave ‘properly’.

The Victorians, she says, thought parks, were important for promoting social harmony, respectability and family values at a time of rising concerns about children’s behaviour, health and welfare.

But through postcards, public records, archaeology and children’s literature from the period, the PhD student shows  the children weren’t always the little angels we might think they were.

The parks she studied include Whitworth Park in Manchester, Roundwood Park and Vauxhall Park in London, Greenhead Park in Huddersfield and Saltwell Park in Gateshead.

She said: “I don't agree that Victorian and Edwardian children were to be seen and not heard.

“It was supposed to be the golden age for middle class children, who were depicted as angels or fairies in advertisements and literature.

“But children and children’s play was a prominent feature of parks and one which was framed by class.

“Working class children, depicted as street urchins, were given a less positive spin, but parks were thought to be a good way to purify and improve them.”

She added: “And like today, there was a rowdy and unpredictable side too: while parks were supposed to promote social harmony, this was often resisted and parks could be sites of conflict and contrast.

“Newspapers reported that children and youths were sitting on park benches shouting abuse at passers-by.

“Children would also illegally fish in park lakes for ornamental fish or steal fruit of the trees.”

Objects excavated in Whitworth Park by The University of Manchester led Community Archaeology Project, of which Ms Colton is part, showed that eating food and drinking alcohol, forbidden in the park bye-laws, took place in the park.

The team have unearthed marbles from the tops of Codd bottles alongside the more expensive coloured glass marbles, showing how children from different social classes played and competed together.

Five stones – a game similar to jacks - was also found at the Manchester Park. Made of ceramic, they are among the earliest examples of toy manufacture.

She said: “Excavated material showed how parks were one of the few places where social classes could mix and compete against each other, particularly children.

“I hope that my work will inform our understanding of the parks’ heritage and in doing so will help to inform a vision for their future.

"Children have always had a wild side to their nature;  kids will be kids and this is as true today as it was in the Victorian and Edwardian eras.”

If you want to hear more about Ms Colton’s research, visit the Whitworth Park Community Archaeology and History Project, led by University of Manchester archaeologists. Funded by the Heritage Lottery Fund, the dig aims to expose and explore the rich vein of Victorian and Edwardian history still hidden from view at Whitworth Park. Local schoolchildren will work alongside the University’s top archaeologists, students and local community volunteers in field workshops from 1 to 12 July. Ms Colton will be talking to children about their own use and understanding of the park’s space, using Edwardian postcards and exhibits unearthed by the team.