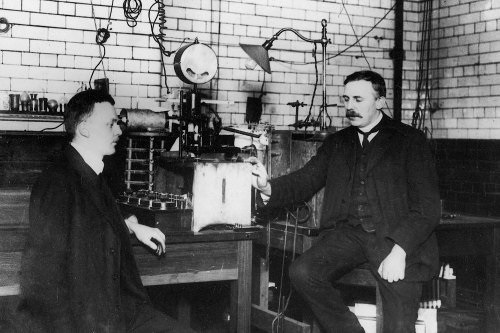 Manchester is the birthplace of nuclear physics and this year marks 100 years since Ernest Rutherford ‘split the atom’ at The University of Manchester…or does it?

In 1917, the Nobel Prize winner actually became the first person to create an artificial nuclear reaction in laboratories at the University. Rutherford’s discovery is now often described as ‘splitting the atom’ in popular accounts, but this should not be confused with the process of nuclear fission discovered later in the 1930s.

Between 1914 and 1919 Rutherford conducted many experiments at the University by bombarding nitrogen gas with alpha particles. These experiments indicated that penetrating radiation was emitted that Rutherford hypothesised might be the nucleus of a hydrogen atom.

Later painstaking research done by Patrick Blackett, at Rutherford’s suggestion in Cambridge in the 1920’s, captured rare cloud chamber images that revealed the full detail of what was happening. The photographs showed some of the alpha particles were absorbed by the nitrogen nuclei. This process led to excess energy in the nitrogen nuclei, resulting in an oxygen atom and a hydrogen nucleus being emitted. (Incidentally, Blackett moved to Manchester in 1937 where he was elected to be the Langworthy Professor and won the Nobel Prize in 1948 for work on cosmic rays.)

It was with these first experiments that Rutherford and his team became the first in history to initiate an artificial nuclear reaction, with Blackett later revealing the reaction mechanism. We now also know that the hydrogen nucleus emitted was actually a subatomic particle, now called the proton.

Prof Sean Freeman, Professor of Nuclear Physics and Head of the School of Physics & Astronomy at the University, explains: ‘“Splitting the atom” is not a particularly good description of this work, given the detailed picture of the reaction revealed later by Blackett." 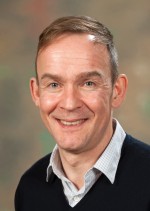 'This was also the discovery of the proton and Rutherford showed that the “nucleus of hydrogen” existed in the nucleus of other atoms and thus appeared as a basic building block. The first nuclear reaction initiated by a human and the discovery of the proton are big steps in themselves, but from these reactions you can also infer the sizes of nuclei. It also led to the development of nuclear accelerators - so that you could induce all sorts of different nuclear reactions.

‘This discovery, and the earlier work done by Rutherford that established the existence of an atomic nucleus itself, essentially established the field of nuclear physics right here in Manchester.’

To mark the centenary, and for the first time in the University’s history, Rutherford’s private research room will be opened to the public. This is part of a special exhibition called ‘Rutherford's Manchester: the birthplace of nuclear physics.’

Visitors will be guided around some of the most important scientific sites of discovery at the University before entering the building where Rutherford and his colleagues began the field of atomic physics.

Dr James Hopkins, the University’s Historian and Heritage Manager, added: ‘This is a unique exhibition about a unique scientist responsible for one of the world’s biggest scientific breakthroughs. This University and this city is the birth place so of nuclear physics and the exhibition explains the importance of the work carried by Rutherford and his colleagues at the University demonstrates the enormous impact of their discoveries.’

The new exhibition celebrates the Nobel Prize winner’s huge contribution to nuclear physics and clears up some misconceptions along the way. You can book your place on the tour here: