Don’t miss out on any article, podcast or presentation by SCI members anymore with our regular research round ups covering any recently published SCI research! 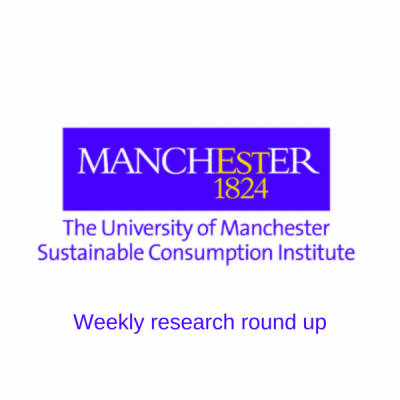 Weekly research round up 2

SCI Honorary Researcher Tally Katz-Gerro co-published the paper ‘Between perceptions and practices: The religious and cultural aspects of food wastage in households’ in Appetite. You can access the paper for free here.

Understanding the determinants of food provisioning is crucial for efforts to reduce household food wastage. Various studies have identified a web of interrelated socio-demographic characteristics, values, attitudes, and skills as drivers of household food wastage. Our contribution is in exploring the relationship between cultural and religious views and food waste generation. We do that in the context of three social groups in Israel: secular Jews, religious Jews, and Muslim Arabs. We interviewed 27 individuals who have a certain standing in their respective communities with broad perspective of the cultural context of food-related issues. Our results highlight the conflict between religious and secular values and actual food wastage practices. We identified several factors that lead to household food wastage: past scarcity, the consumer culture, and hospitality. We found various ways by which cultural and religious values shape food-waste perceptions. Results show a dissonance between food-related motivations and actual practices. We also demonstrate how the dissonance can be reconciled, both on the level of justification and on the level of action.

Professor Sherilyn MacGregor co-published the article ‘Taking Political Time: Thinking Past the Emergency Timescapes of the New Climate Movements’ in South Atlantic Quarterly. You can read the article here.

The article discusses the contrasting “temporal regimes” of Extinction Rebellion and the concept of a feminist green new deal. The authors discuss the former’s emphasis on emergency to stimulate disobedient action, particularly out of concern for one’s future children and grandchildren. They argue that, while this emphasis has successfully catalyzed public agency, this agency remains socially narrow, as emergency thinking subordinates the political time central to inclusive movement building, while the personalization of intergenerational concern risks reproducing privilege and asset protection. As a result, actually existing material and symbolic inequalities are characteristically decentered. The authors contrast this with the times-capes of calls for a feminist green new deal, which eschew both crisis narratives and reprocentric futurism. In troubled times, they conclude, it is more productive to reconsider not just when but how to address the demands of climate breakdown.

TIES Postdoctoral Researcher Udeni Salmon has published the paper "“It's wicked hard to fight covert racism”: The case of microaggressions in science research organizations" on intersectional discrimination in STEM research careers ed in Gender, Work and Organization. The paper was published as part of an ESRC-funding project at the University of Lincoln. The paper can be read on an open-access basis here.

The intersection of race and gender discrimination has resulted in the pervasive under-representation of women of color (WOC) in science careers, with research identifying that microaggressions are a key contributory factor to the imbalance. This study aims to compare individual experiences of microassaults, microinsults, and microinvalidations with institutional responses, thereby outlining the disconnects between the perspectives of minoritized scientists and those in positions of power. This paper draws on a constructivist paradigm to compare the experiences of women of color scientists with organizational representatives through 31 interviews conducted in science research organizations in the United Kingdom. The results find that organizational understandings of microaggressions differ substantially from those of WOC scientists. Furthermore, organizational responses favor policy-based solutions that fail to address the slippery and deniable nature of microaggressions. The paper concludes that, contrary to the more prevalent popular diversity initiatives, a greater belief in the testimony of WOC scientists amplified by institutional responses that empower their identity as scientists would be more effective strategies to reduce the sense of shame and isolation caused by subtle forms of discrimination.

Malte Rodl has co-published a new article entitled “Internet search results could be increasing your carbon emissions” with Jutta Haider in The Conversation. In the article based on a recently published paper they argue that the assumptions search engines make about what we are looking for may lead to people emitting more carbon than they would have done otherwise. You can read the article here.