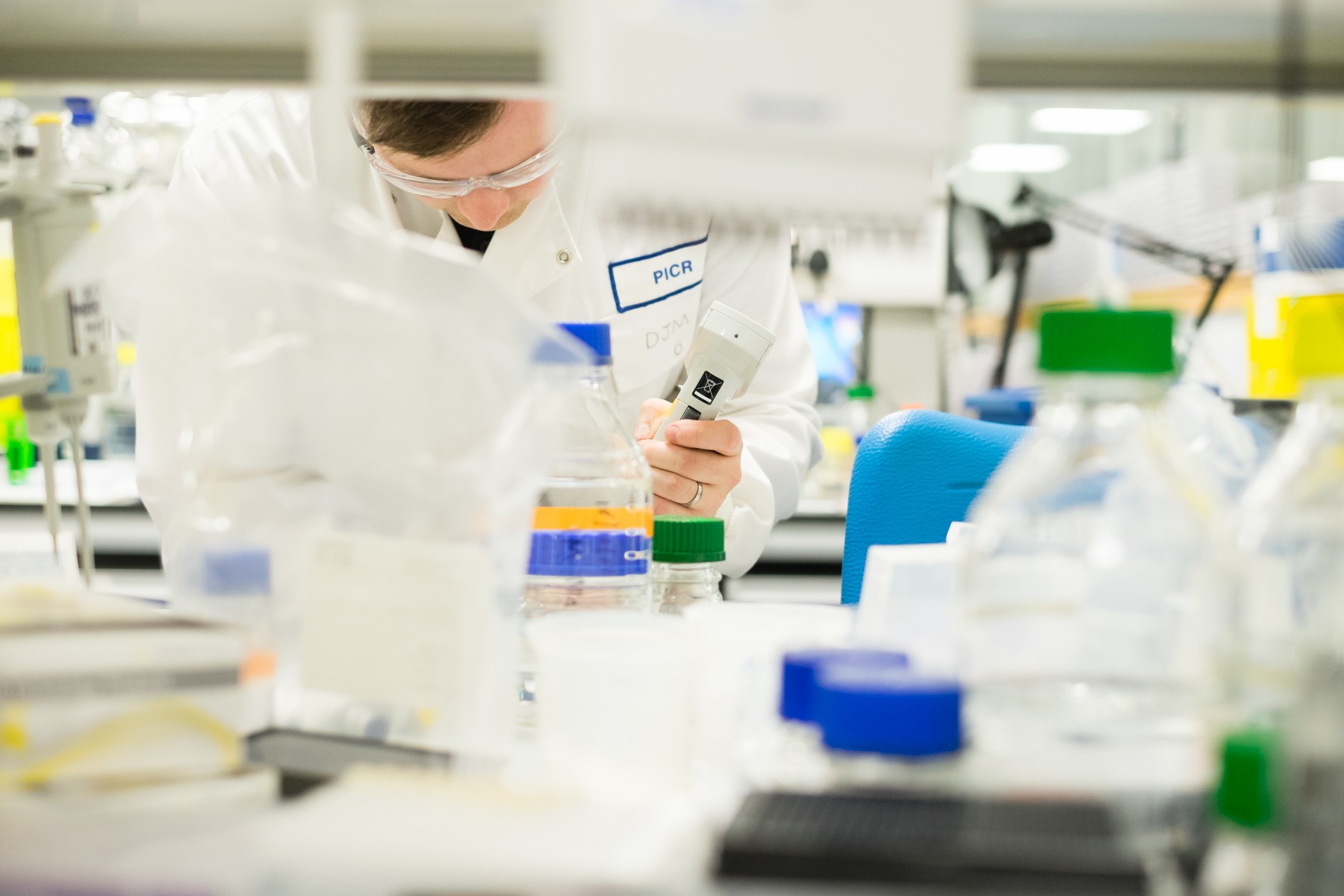 Researchers at the University of East Anglia and University of Manchester have made an important breakthrough that could lead to ‘kinder’ treatments for children with bone cancer, and save lives.

Current treatment is gruelling, with outdated chemotherapy cocktails and limb amputation. But despite all of this, the five-year survival rate is poor at just 42 per cent – largely because of how rapidly bone cancer spreads to the lungs.

The research was led by Dr Darrell Green, from UEA’s Norwich Medical School and Dr Katie Finegan from the University of Manchester.

Darrell was inspired to study childhood bone cancer after his best friend died from the disease as a teenager. Now, the team has made what could be the most important discovery in the field for more than 40 years.

Darrell said: “Primary bone cancer is a type of cancer that begins in the bones. It’s the third most common solid childhood cancer, after brain and kidney, with around 52,000 new cases every year worldwide.

“It can rapidly spread to other parts of the body, and this is the most problematic aspect of this type of cancer. Once the cancer has spread it is very difficult to treat.

“Around a quarter of patients have cancer that has already spread by the time they are diagnosed. Around half of patients with apparent localised disease relapse, with cancer spread detected later on. These figures have remained stagnant, with no significant breakthroughs in treatment, for more than four decades.

“In high school, my best friend Ben Morley became ill with primary bone cancer. His illness inspired me to do something about it myself because during my studies I realised that this cancer has been all but left behind others in terms of research and treatment progress. So I studied and went through university and obtained my PhD to eventually work in primary bone cancer.

“I want to understand the underlying biology of cancer spread so that we can intervene at the clinical level and develop new treatments so that patients won’t have to go through the things my friend Ben went through. Ultimately we want to save lives and reduce the amount of disability caused by surgery.”

The genetic drivers that cause osteosarcoma are well known (TP53 and RB1 structural variants) but much less is known about what drives its spread to other parts of the body.

Dr Green said: “Because primary bone cancer spreads so fast to other parts of the body, it’s very important to solve exactly why this happens.

“We developed new technology to isolate circulating tumour cells in the blood of patients. These cells are critical for scientific study because they effectively carry out the metastatic process. This was extremely challenging because there is only one such cell per billion normal blood cells – it took over a year to develop but we cracked it.

“It was also challenging because most studies investigating circulating tumour cells are performed in common adult cancers where the methods significantly differ because the cancer biology is so different.

“Osteosarcoma is a less common sarcoma cancer so we had to start from scratch to not only find these cells in the first place, but to keep them alive so we could profile their gene expression.”

After profiling tumours, circulating tumour cells (CTCs) and metastatic tumours from patient donors, they were able to identify a potential driver for metastasis – known as MMP9.

Dr Green said: “This driver that we identified is well known in cancer, but it is also considered ‘un-druggable’ because the cancer quickly becomes resistant to treatment, or it finds a way to escape being targeted.

“So we thought we would try something a bit clever and find the ‘master regulator’ of MMP9 so that we could ‘action’ the ‘un-actionable’.”

The team began collaborating with researchers at the University of Manchester who were working on the proposed master regulator of MMP9 - MAPK7 - in several cancers using mouse models including osteosarcoma.

Together, they engineered human osteosarcoma cells to contain a silenced version of MAPK7. They found that when these cells were put into mice, the primary tumour grew much more slowly. Importantly, it didn’t spread to the lungs – even when the tumours were left to grow for a long time.

“Getting even deeper, our study shows that silencing MAPK7 stopped metastasis because that gene pathway was hijacking a particular part of the immune system that caused the spread,” said Dr Green.

“This is really important because not only do we now have a gene pathway associated with metastasis, we know that removing this gene pathway actually stops cancer spread in a live animal. And we also know how and why this is happening - through hijacking the immune system.

“The next step already gearing up to take place is to silence this pathway in treatment form, now that we have shown how critical this pathway is.

“If these findings are effective in clinical trials, it would no doubt save lives and improve quality of life because the treatment should be much kinder, compared to the gruelling chemotherapy and life changing limb amputation that patients receive today.”

Senior author Dr Katherine Finegan, from the University of Manchester,  said: “It has been great to work together with Darrell and the team at UEA. Using their genetic insights from patient material, we were able to validate their work in models of primary bone cancer. As a result, we have highlighted a potential new way to treat metastatic bone cancer by targeting a key protein that promotes metastases: MAPK7. This work has uncovered a novel treatment option for osteosarcoma, something we have not had for the last 40 years.

“In the Finegan lab we are already in the process of developing new drugs against MAPK7, which we hope to implement for the benefit of primary bone cancer patients in the future.

“We would also like to thank the charity Friends of Rosie who funded the work in the Manchester lab and support childhood cancer research here in the North West.”

It has been great to work together with Darrell and the team at UEA. Using their genetic insights from patient material, we were able to validate their work in models of primary bone cancer. As a result, we have highlighted a potential new way to treat metastatic bone cancer by targeting a key protein that promotes metastases: MAPK7. This work has uncovered a novel treatment option for osteosarcoma, something we have not had for the last 40 years.

One of the patients who donated tissue to the study was five-year-old ‘Super Strong’ Sophie Taylor from Norwich. She was first diagnosed with osteosarcoma in January 2018, and underwent surgery to amputate part of her leg, as well as chemotherapy.

Sadly Sophie was taken to hospital with breathing difficulties a year after diagnosis at the beginning of January 2019, where her family were told there was extensive cancer in her lungs. She passed away on January 18, 2019.

Sophie’s dad Alex Taylor said: “Sophie was diagnosed with Osteosarcoma in January 2018. Unfortunately it was in her lungs at the time it was found.

“When we were informed necrosis from chemotherapy was low we embarked on finding additional options and were fortunate to come into contact with Dr Darrell Green.

“We did not hesitate in offering Sophie's tumour for research and to also have her DNA and RNA analysed to link it to additional drugs to pursue. It gave us hope and it was amazing to have Darrell fighting in our corner.

“Unfortunately the way Sophie's journey panned out we didn't get to try the options we put on the table but we are extremely pleased that Sophie has been able to help in the way she did.

“We will continue to support Darrell and the work he does and Sophie's future charity will aim to support the continuation of bone cancer research so future Sophies get a better outcome.

“We are delighted Darrell's work is being recognised, he is a remarkable man and we are really grateful for his support during treatment, after treatment and since Sophie's passing. He truly deserves the credit and recognition he receives.

“Sophie was simply a child from out of this world, she demonstrated strength and courage beyond comprehension and deserved a much better outcome. She had her leg amputated, months of hard chemotherapy, nursed an awful wound from surgery and just got on with it, fulfilling a range of achievements including going to the top of Snowdon, playing football with and becoming close friends Leicester City's James Maddison, and she inspired many people around the world. We are so proud of how she fought and even more so that she has contributed to research which will be lifesaving for future children.

“We will add this to her legacy and share it with pride and will continue to ‘takeasophie’ and stick our tongue out at cancer just like Sophie did. Thank you Darrell and well done that your immense hard work is paying off, we are very proud of you.”

‘Targeting the MAPK7/MMP9 axis for metastasis in primary bone cancer’ is published in the journal Oncogene on July 13, 2020.

This work has been funded by The Humane Research Trust, Friends of Rosie, Big C and Paget’s Association.

Dr Green and the team are incredibly grateful to all the donors who make their research into primary bone cancer possible. This pioneering work wouldn’t have been possible without their generous support.